Seventeen states have now introduced bills for state-owned banks, and others are in the works. Hawaii's innovative state bank bill addresses the foreclosure mess. County-owned banks are being proposed that would tackle the housing crisis by exercising the right of eminent domain on abandoned and foreclosed properties. Arizona has a bill that would do this for homeowners who are current in their payments but underwater, allowing them to refinance at fair market value.

The long-awaited settlement between 49 state attorneys general and the big five robo-signing banks is proving to be a major disappointment before it has even been signed, sealed and court approved. Critics maintain that the bankers responsible for the housing crisis and the jobs crisis will again be buying their way out of jail, and the curtain will again drop on the scene of the crime. 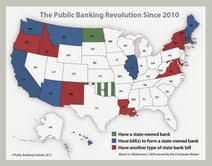 We may not be able to beat the banks, but we don't have to play their game. We can take our marbles and go home. The Move Your Money campaign has already prompted more than 600,000 consumers to move their funds out of Wall Street banks into local banks, and there are much larger pools that could be pulled out in the form of state revenues. States generally deposit their revenues and invest their capital with large Wall Street banks, which use those hefty sums to speculate, invest abroad, and buy up the local banks that service our communities and local economies. The states receive a modest interest, and Wall Street lends the money back at much higher interest.

Rhode Island is a case in point. In an article titled "Where Are R.I. Revenues Being Invested? Not Locally," Kyle Hence wrote in ecoRI News on January 26th:

According to a December Treasury report, only 10 percent of Rhode Island's short-term investments reside in truly local in-state banks, namely Washington Trust and BankRI. Meanwhile, 40 percent of these investments were placed with foreign-owned banks, including a British-government owned bank under investigation by the European Union.

Further, millions have been invested by Rhode Island in a fund created by a global buyout firm... From 2008 to mid-2010, the fund lost 10 percent of its value -- more than $2 million... Three of four of Rhode Island's representatives in Washington, D.C., count [this fund] amongst their top 25 political campaign donors...

Are Rhode Islanders and the state economy being served well here? Is it not time for the state to more fully invest directly in Rhode Island, either through local banks more deeply rooted in the community or through the creation of a new state-owned bank?

Hence observes that state-owned banks are "[o]ne emerging solution being widely considered nationwide... Since the onset of the economic collapse about five years ago, 16 states have studied or explored creating state-owned banks, according to a recent Associated Press report."

2012 Additions to the Public Bank Movement

Make that 17 states, including three joining the list of states introducing state bank bills in 2012: Idaho (a bill for a feasibility study), New Hampshire (a bill for a bank), and Vermont (introducing THREE bills--one for a state bank study, one for a state currency, and one for a state voucher/warrant system). With North Dakota, which has had its own bank for nearly a century, that makes 18 states that have introduced bills in one form or another--36% of U.S. states. For states and text of bills, see here.

Other recent state bank developments were in Virginia, Hawaii, Washington State, and California, all of which have upgraded from bills to study the feasibility of a state-owned bank to bills to actually establish a bank. The most recent, California's new bill, was introduced on Friday, February 24th.

All of these bills point to the Bank of North Dakota as their model. Kyle Hence notes that North Dakota has maintained a thriving economy throughout the current recession:

One of the reasons, some say, is the Bank of North Dakota, which was formed in 1919 and is the only state-owned or public bank in the United States. All state revenues flow into the Bank of North Dakota and back out into the state in the form of loans.
Since 2008, while servicing student, agricultural and energy-- including wind -- sector loans within North Dakota, every dollar of profit by the bank, which has added up to tens of millions, flows back into state coffers and directly supports the needs of the state in ways private banks do not.

Publicly-owned Banks and the Housing Crisis

A novel approach is taken in the new Hawaii bill: it proposes a program to deal with the housing crisis and the widespread problem of breaks in the chain of title due to robo-signing, faulty assignments, and MERS. (For more on this problem, see here.) According to a February 10th report on the bill from the Hawaii House Committees on Economic Revitalization and Business & Housing:

The purpose of this measure is to establish the bank of the State of Hawaii in order to develop a program to acquire residential property in situations where the mortgagor is an owner-occupant who has defaulted on a mortgage or been denied a mortgage loan modification and the mortgagee is a securitized trust that cannot adequately demonstrate that it is a holder in due course.

The bill provides that in cases of foreclosure in which the mortgagee cannot prove its right to foreclose or to collect on the mortgage, foreclosure shall be stayed and the bank of the State of Hawaii may offer to buy the property from the owner-occupant for a sum not exceeding 75% of the principal balance due on the mortgage loan. The bank of the State of Hawaii can then rent or sell the property back to the owner-occupant at a fair price on reasonable terms.

Arizona Senate Bill 1451, which just passed the Senate Banking Committee 6 to 0, would do something similar for homeowners who are current on their payments but whose mortgages are underwater (exceeding the property's current fair market value). Martin Andelman calls the bill a "revolutionary approach to revitalizing the state's increasingly water-logged housing market, which has left over 500,000 of Arizona's homeowners in a hopelessly immobile state."

The bill would establish an Arizona Housing Finance Reform Authority to refinance the mortgages of Arizona homeowners who owe more than their homes are currently worth. The existing mortgage would be replaced with a new mortgage from AHFRA in an amount up to 125% of the home's current fair market value. The existing lender would get paid 101% of the home's fair market value, and would get a non-interest-bearing note called a "loss recapture certificate" covering a portion of any underwater amounts, to be paid over time. The capital to refinance the mortgages would come from floating revenue bonds, and payment on the bonds would come solely from monies paid by the homeowner-borrowers. An Arizona Home Insurance Fund would create a cash reserve of up to 20 percent of the bond and would be used to insure against losses. The bill would thus cost the state nothing.

Critics of the Arizona bill maintain that it shifts losses from collapsed property values onto banks and investors, violating the law of contracts; and critics of the Hawaii bill maintain that the state bank could wind up having paid more than market value for a slew of underwater homes. An option that would avoid both of these objections is one suggested by Michael Sauvante of the Commonwealth Group, discussed earlier here: the state or county could exercise its right of eminent domain on blighted, foreclosed and abandoned properties. It could offer to pay fair market value to anyone who could prove title (something that with today's defective title records normally can't be done), then dispose of the property through a publicly-owned land bank as equity and fairness dictates. If a bank or trust could prove title, the claimant would get fair market value, which would be no less than it would have gotten at an auction; and if it could not prove title, it legally would have no claim to the property. Investors who could prove actual monetary damages would still have an unsecured claim in equity against the mortgagors for any sums owed.