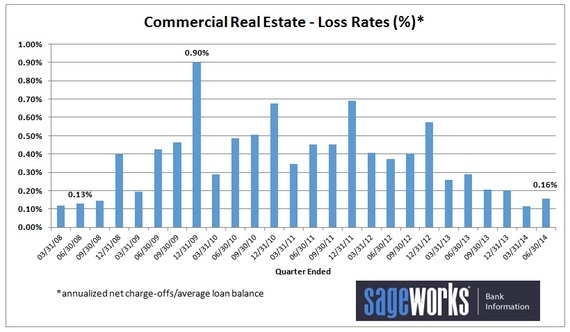 U.S. banks are seeing some of the lowest loss rates of the past six years on commercial real estate and construction loans, boosting their case for increased lending activity in the sector.

Data from Sageworks, a financial information company, show that net charge-offs for commercial real estate loans (non-farm, non-residential) were 0.16 percent of average loan balances in the most recent quarter. This is down from 0.9 percent at the end of 2009 and 13 basis points below June 2013 quarter rates. Loss rates for construction and land development loans have fallen from 3.58 percent of average loan balances in December 2009 to 0.24 percent in the most recent quarter.

Sageworks analyst Regan Camp said that in addition to falling loss rates, the improving economy and increased competition for attractive borrowers in the commercial and industrial lending space may also contribute to a sense of confidence in lending activity in this sector. 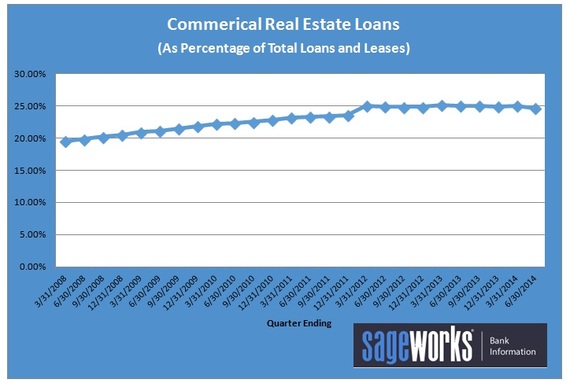 "The good news is that as more banks move back into real estate lending, it will present more options for borrowers," Camp said. Increased competition for borrowers might allow for more appealing terms or incentives, he noted.

For several years, Camp said, banks moved away from commercial real estate lending because of losses tied to real estate loans before the Great Recession. Demand, too, had been weak as contractors and investors either collapsed or backed off dramatically in the wake of real estate market woes. 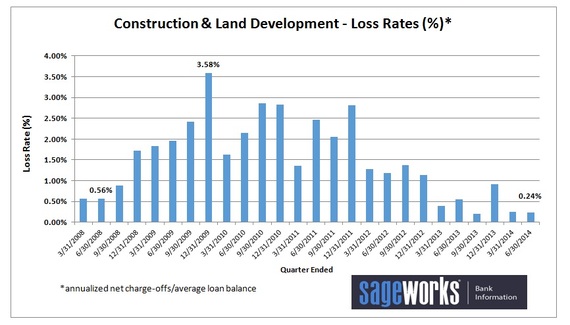 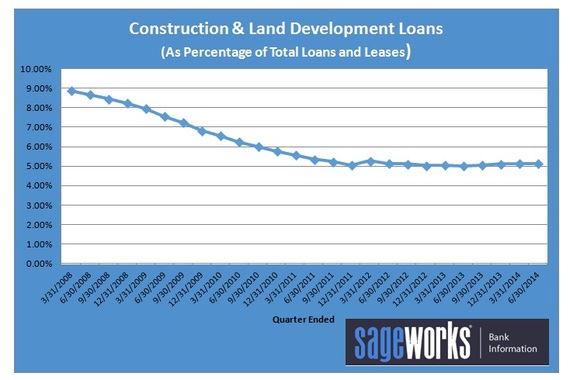 Commercial real estate loans as a percentage of total loans and leases at U.S. banks have slowly increased since 2008. These loans now make up 24.68 percent of portfolios, compared to 19.55 percent as of March 2008, according to data from Sageworks Bank Information, a web-based data platform.
Construction and land development loans were 5.14 percent of total loans and leases in the June-ended quarter, down from 8.88 percent in March 2008.

Low demand for credit and fewer credit-worthy projects were the biggest challenges for banks in making commercial real estate loans, according to a survey released in April by the American Banking Association. But hard caps on commercial real estate lending imposed by regulators and other supervisory requirements were cited 22 percent of the time in the survey.

Camp said that risk is an important factor for banks, which are under increased regulatory scrutiny and requirements to adequately stress test their commercial real estate portfolios.

"Banks have been burned before and regulators want to know, did they learn their lesson?" he said. "Even though confidence has come back significantly, I don't think anyone's one hundred percent certain it won't happen again."

A recent report by the Real Estate Research Corporation (RERC) cautioned that increased demand for commercial real estate and competition for high-quality assets will cause asset prices to overtake their property values in certain sectors.

"The relationship between the value versus price of commercial real estate is precariously balanced," said Ken Riggs, RERC president and CEO in a statement on the report. "Our analysis showed upward pressure on pricing without a corresponding increase in value, and when this happens, investors may be forced to accept lower returns for assets with added risk."