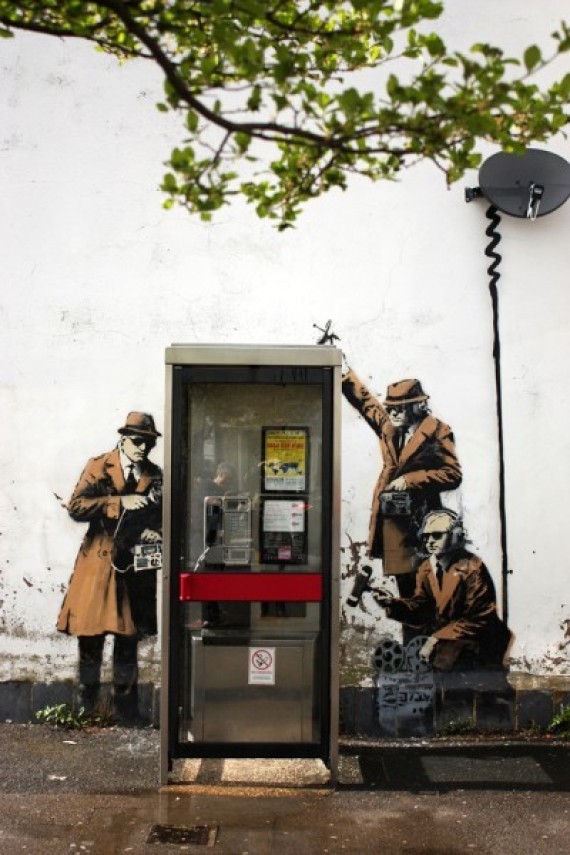 The homeowner who became the inadvertent owner of Banksy's Spy Booth when the anonymous British street artist chose his Cheltenham house as a canvas says the artwork, valued at seven figures, has been nothing but trouble.

Featuring three trench coat–clad spies listening in on the phone booth in front of the mural, the piece, which appeared this past April, is a reference to the country's nearby intelligence headquarters, the GCHQ (see Suspected Banksy Pokes Fun at Government Surveillance).

Speaking with local radio station Swindon 105.5, homeowner David Possee lamented the painting's appearance, claiming “it all unraveled when this mural appeared on the side of the property."

His attempts to protect the artwork were hindered by bureaucratic red tape courtesy of the Cheltenham Borough Council. “They didn't come up with any sort of ideas," said Posse. “I suggested Perspex but they said it's against listing consent. They just said, ‘You can't put that on there,' and I was threatened with a fine. They offered no alternative."

The home is in a state of disrepair, and Possee claims to have been fined over the state of the cement wall bearing the painting. When he tried to fix it, however, “we had the scaffolding up and then we had a huge panic in Cheltenham thinking I was going to cut it out, which was not the case" (see Banksy's Spy Booth Headed to Auction Block).

"I've said right from the beginning I think it deserves to stay in Cheltenham," Possee insists. "If Cheltenham wants it, Cheltenham can have it. But I need to get on with my own life. So buy the building off me."

Of course, Posseee does have at least one offer: local businessman Hekmat Kaveh had agreed to buy the home for $1 million mere hours before it was vandalized on August 1 (see Vandals Completely Deface Banksy's Spy Booth). The deal was reportedly delayed by the Borough Council's investigation into work being done on the home.

Following the vandalism, the Gloucestershire Echo reported that Kaveh had enlisted Banksy restorer Robin Barton to remove the silver graffiti and was still looking to purchase the property. Last month, Kaveh's application for retrospective planning permission for the Banksy mural was approved, over Possee's objections (see Banksy's Spy Booth Mural Cherished and Perserved in Cheltenham).

"The Banksy was created without permission," Posse complained at the council meeting, claiming the work was "not just unauthorized, it involved the commission of a criminal offense."

"It has caused me significant financial problems, the building is currently empty, uninhabitable and the damp proofing needs to be carried out on the flank wall," he added. "The serious state of disrepair is a current danger to passing members of the public."

The council tells a different story, with Martin Chandler, team leader of development management for the council telling the Independent that Possee had been warned for three months prior to the painting's appearance to fix the wall. “There has been ample opportunity for Mr Possee to discuss a positive way forward for the mural but unfortunately this has not happened."