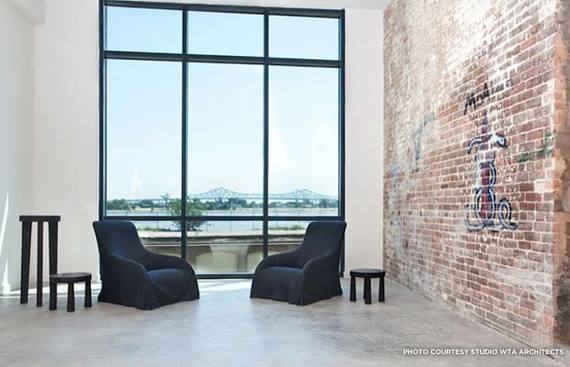 Tenants in the Rice Mill Lofts are prohibited from altering the building's original graffiti.

If you've ever longed to make your home in a century-old industrial rice mill amid preserved graffiti and masonry brick walls, New Orleans' Rice Mill Lofts might be the perfect place for you.

Located in the city's historic Bywater district, the 1892 building was originally home to the largest rice mill in North America. Real estate developer Sean Cummings bought the mill in the early '90s, and in 2004 he partnered with architect Wayne Troyer to create unique, light-filled living spaces within the building's walls. In the meantime, Cummings says, squatters and graffiti artists tagged both the exterior and the interior of the mill, despite warning signs posted by the fire department deeming it structurally unsafe to enter.

"That was initially disconcerting," Cummings says of the art appearing on the walls. "It felt like they really defaced this raw, interesting masonry."

But, he continues, it became apparent that the spray-painted pieces were unique and worth preserving. "The building is in a neighborhood that's very popular with artists and creative entrepreneurs, and with graffiti being kind of a raw art form, it fits so nicely into that. We wanted to preserve it kind of in that rebel spirit," he says. 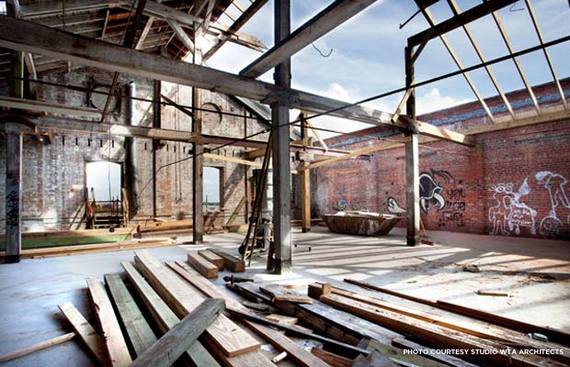 Construction was completed on the lofts in 2011.

Troyer describes the state of the building when the restoration work began as "blighted," following structural damage to the roof during Hurricane Katrina and gradual rot of the heavy timber framing.

"We came in and basically had to shore up the building first," he says, adding that the project's design centered around preserving the remaining historic fragments of the building as much as possible. The interior masonry and timbers were left exposed, and while the windows were replaced, the new installations were chosen to match the mill's historic profile.

Of the street art, he says, "it was something that we saw as being connected to the spirit of the building," adding that during the 1980s the vacant space was used for dance parties and raves. He and Cummings also recruited local Bywater artists to contribute serviceable art pieces to the Lofts' hallways and common areas, including glass-cast apartment numbers and custom-milled carpet.

The mill's restoration process took 16 months and was completed in 2011, heralding a revitalization of Bywater that's still unfolding. Cummings says that the building added about three percent to the population of the immediate neighborhood, a place where Beasts of the Southern Wild director Benh Zeitlin and pop singer Solange Knowles have both bought homes in recent years. 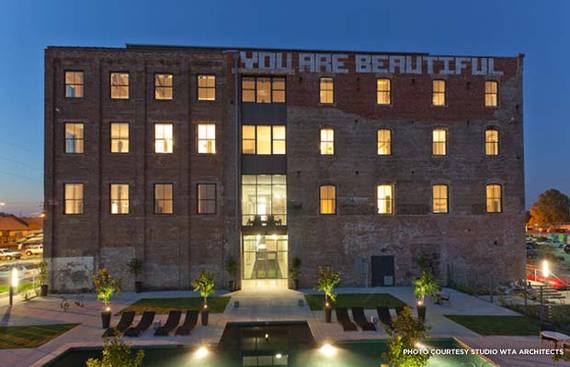 The building's exterior mural is rumored to be a work by renowned graffiti artist Banksy.

"We're seeing a lot more folks moving into the neighborhood, which is great," Cummings says of a growing trend in the area of a conversion of industrial properties to residential living spaces.

While the Lofts are nothing if not distinctive, perhaps the most distinctive aspect is a mural boldly declaring You Are Beautiful, etched in white paint on the side of the building that faces the Mississippi River and rumored to have been painted by renowned street artist Banksy.

"We hear all the time from river boat captains how much they enjoy seeing that, making their run through the city," Cummings says.