They wait for the tired tourists walking up the long hills of Bethlehem: cabdrivers, some in Mercedes, others in their stepsister Skodas. All ask the same questions in broken English: Church of Nativity? Manger Square? Rachel Tomb?

"Banksy?" said Ibrahim, as he approached my travel companion, Stephen and me. Though spent from a day in Jerusalem's Old City and wanting to see little more than the Church of the Nativity, we stopped. "How much?" One hundred shekels came the reply. Stephen and I looked at each other, shrugged, handed Ibrahim the bill and got in his beat-up, white Skoda.

Banksy, the subversive British artist who started his career with a can of spray paint and a graffiti rat tag, has become as popular around the West Bank as Naji Salim al-Ali, the iconic and martyred political cartoonist. In fact, even more so, if imitation truly is the sincerest form of flattery. It takes a trained eye to spot the real Banksy from his legion of protégées, who have colored their side of the 425-mile-long Geder Hafrada (separation barrier) -- or as the Palestinians call it, "jidar al-fasl al-'unsuri" (racial segregation wall) -- with an incredible panoply of resistance art.

In many ways, it's difficult to know who inspired whom.

In 2005, Banksy traveled for the first time to the West Bank and painted, in Bethlehem, the Trompe l'oeil scenes of a beaches peeking through smashed holes in the wall. They were a huge hit with the Palestinians -- not so with the Israelis, who fired their guns in the air to scare off the enigmatic, misanthrope who already relishes in disdain. He went on to create eight other stencils, including the "Flower Chucker", the iconic protestor throwing a bouquet instead of a rock, a girl carried over the wall by balloons and scissors clipping a passageway through the concrete monolith. 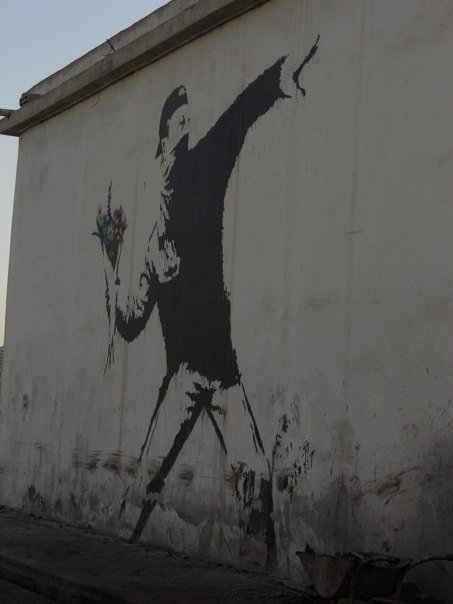 Ibrahim took us first to the Banksy every young tourist wants to see. Standing three-stories tall against the side of a nondescript grocery store, the "Flower Chucker" was one of many incarnations in Banksy's repertoire, but a must-see nonetheless. Of it, he has said, "Some people represent authority without ever possessing any of their own."

But Ibrahim knew not just of the Banksy on the checklists. He had made a point of mapping most of the Banksy stencils. (Offended Palestinians painted over two, including one of donkey being checked by an Israeli soldier for papers, because they didn't understand the ironic references.) These contemporary murals that mock the wall bring badly needed income to Bethlehem's tourist economy, which has been choked by it since 2002.

Next, Ibrahim drove us to another freestanding Banksy, that of a dove donning a flak jacket with a cross hairs painted over it. By far the most colorful and dramatic of the graffiti, it now provides a welcome advertisement for "fine jewelry, genuine antiquities and olive wood carvings" of the Saca Souvenir store. 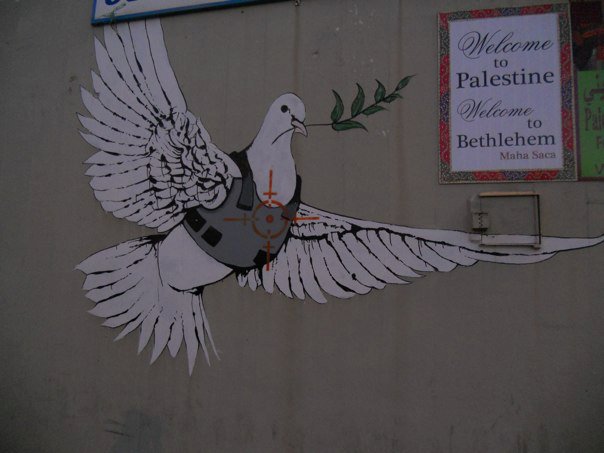 After stopping at the Church of the Nativity -- a must-see for me, a survivor of 12 years of Catholic prep school -- Ibrahim took us to a Banksy stencil of an angel crying hearts near Shepherds' Field, the Biblical spot where the angel pointed out the direction of the Messiah's manger. We next stopped at a busy intersection adorned with one last stencil of a young girl frisking an Israeli soldier. That particular piece highlights a street sign pointing the way to Jerusalem. 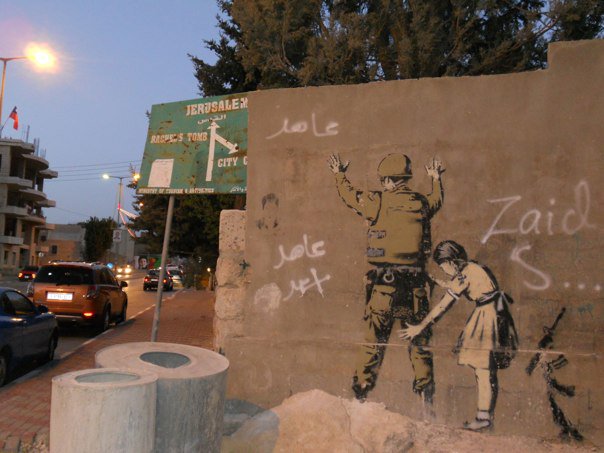 Tired, hungry and worried because Stephen had left his passport in Jerusalem, Ibrahim could only convince us to see one more "Banksy" before we headed home. He pointed the Skoda in the direction of the Aida Camp, the well-known United Nations Refugee and Works Agency near the Bethlehem checkpoint whose crumbling buildings are tagged with large skeleton keys. They are images of the one Ibrahim carried in his car to symbolize the home in Palestine he abandoned. "See, more Banksy," Ibrahim said, pointing to a stenciled escalator of people scaling another part of the wall.

This piece, however, was a crude imitation of the real Banksy. Stephen and I, however, didn't have the heart to tell Ibrahim, as we waited for the cab from Israel to pick us up and take us back. Though he had tried, Ibrahim could take us no further, closed off from the rest of the country.