In a series of communiqués beamed from his website, the global street artist Banksy gave graffiti and street art followers a near daily jolt of mystery and mouse clicking that had people looking at every street scene as a possible Banksy by the time it ended. While few can confirm the exact level of involvement the actual artist had in the five boroughs, if any, none will deny that the Banksy brand underwent a major "refresh" this month that again put his name on the lips of those who had begun to forget him and many who had never heard of him.

Thanks to this masterful marketing campaign billed as a month-long "residency" on New York's streets, many thousands were talking about him daily on the street, on television, radio, social media, in galleries, studios, office cubicles, art parties, and the mayors' office. By effectively combining the sport of treasure hunting with humor and populism, each new cryptic appearance of something-anything gradually conditioned some grand art doyennes and the plainer mongrels amongst us to drool on command and lift a leg in salute to the curiously still anonymous artist and the team who helped him pull it off. 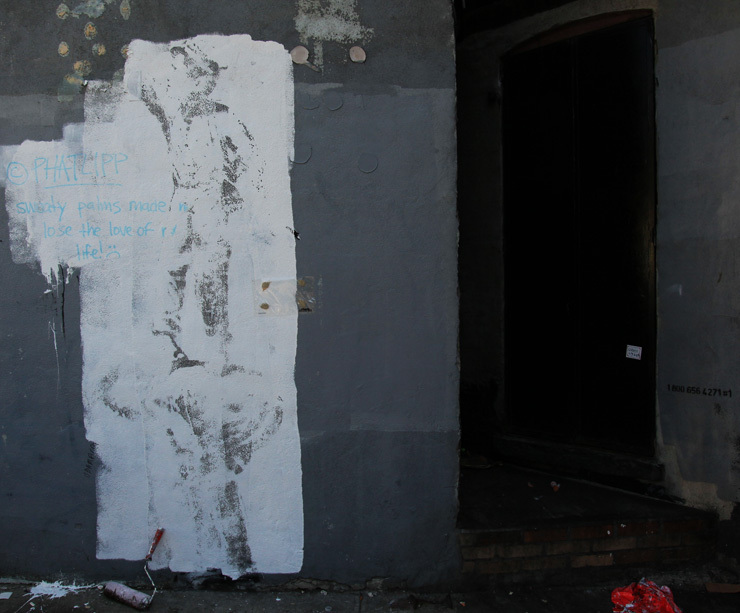 The first Banksy of the 'residency', buffed shortly after it was painted, immediately began the rumors and conjecture. (photo © Jaime Rojo)

Like fans of a good crime mystery, New Yorkers gamely tossed many theories into the air with chattering conjecture as to his motivations, his choice of locations, his messages, his meanings, and of course his identity. Clearly fifty percent or more of his identity in the popular mind is tied directly to his anonymity, possibly because of our desperate desire to still believe that someone can be an anonymous globe-trotting vandalizing provocateur in an increasingly surveilled world. Frankly, we don't really want to know. The day we find out the true identity of Banksy, you might as well pull the beard off of Santa Claus too.

The bigger story of this nearly household name is not that he has re-called the enthusiasm of the mid-2000s street art scene that spawned a million stencils, or that his themes are often clever, occasionally saccharine, rarely transgressive and reliably populist. After the fog of this months' hype clears we find that he has reminded us why we fell in love with street art in the beginning and how to take back the public square for ourselves and to re-frame the very streets we walk on. 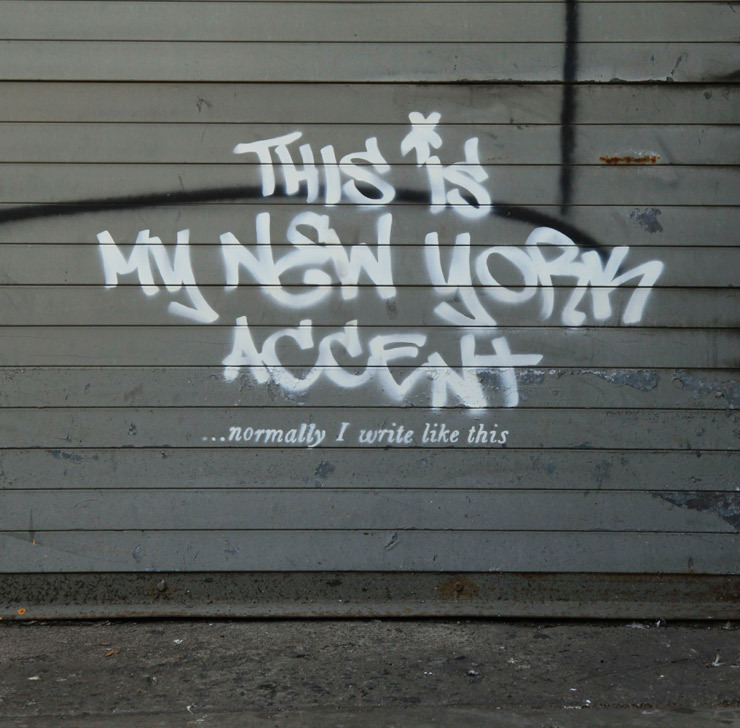 The "Better Out Than In" show was a welcome reprieve from the government shutdown, our skyrocketing rents, and $25 museum admissions. There was no velvet rope and no snotty door person pawing through an iPad to not find your name. It was daily, participatory, and even this generation of unpaid interns could afford it because it was free. With a certain Pavlovian pride we became so primed for fresh Banksy news that was pushed out at semi-rhythmic intervals from his website that many of us began seeing Banksy's where they weren't as we visited parts of our city we didn't even know.

After all, the newest Banksy could be just about anything. His month-long street show included sculpture, live performance, live ants, puppetry, canned music, live music, screaming stuffed animals, costumed actors, complex displays, one-layer stencils, a pissing dog, a patient priest and the Grim Reaper driving in a bumper car to the sounds of Blue Oyster Cult. All of it was tweeted, texted, posted, printed, videoed, and otherwise relayed to clans and groupies across devices, platforms, screens and ecosystems in real time. Some people even had the new works tattooed, which shouldn't be that surprising since this is a vandal whose deeds actually raise the value of property. 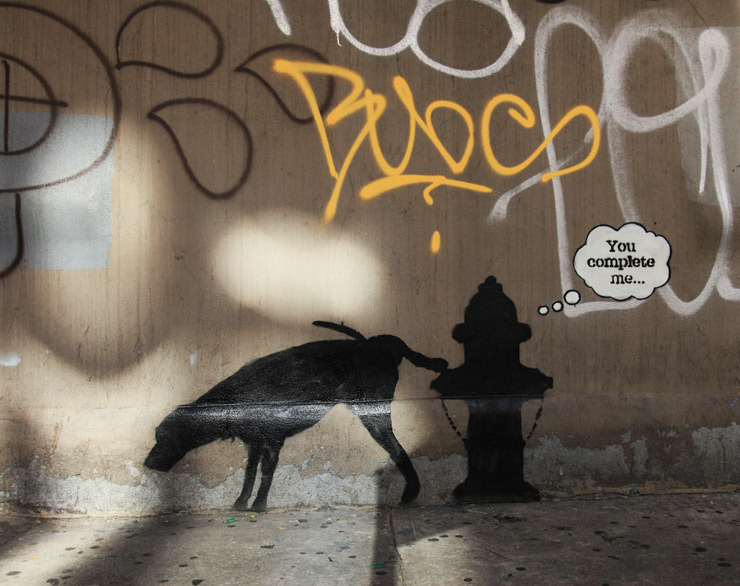 The first global art movement has again been rocked by one of our first global street artists and he seems to have a multitude of interests, doesn't he? Even now we half expect a Banksy finale that includes a Broadway musical dancing and singing through Times Square with sailors and sex workers and shop keepers and cat burglars and masters of industry locked arm in arm, high-kicking and hoofing it up the great White Way.

As always New Yorkers feel gloriously entitled to their opinion and to sharing it with you. Tweets have ranged from enthusiastic and congratulatory to acidic and dismissive, or bored. Some homegrown graffiti writers and street artists have shown a particular xenophobia toward the invading Brit that you'll charitably characterize as "local pride". Others have expressed a happy spirit of solidarity with the guy without feeling like he ate their lunch. 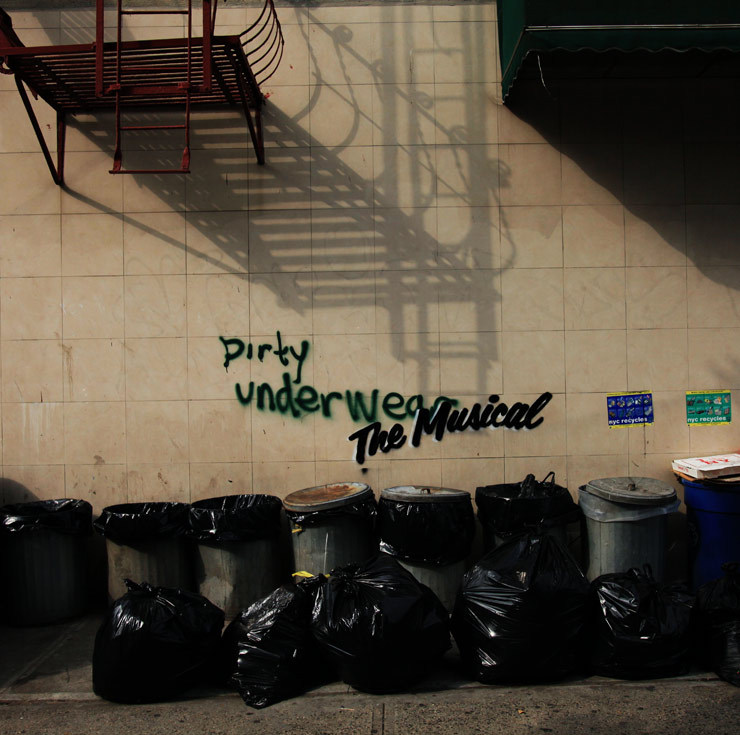 The installations and performances created a circus on the street with groupies, fans, and opportunists standing 8 deep to gander, while some entrepreneurs charged some cash to view them, professors of all sorts held impromptu "classes" to explain the works, a few restorers removed damage from the works, and some seized them altogether.

Admirers posed in front of their newfound Banksy with family and babies and dogs for cell phone shots while tense professionals with heaving backpacks full of long lenses darted and shot the event from every conceivable angle. In one Alice in Wonderland scene in Brooklyn, admiring bystanders tackled to the ground a tagging vandalizer who stopped by to vandalize the vandalism with an aerosol can and stood guard in a circle around him, as he lay motionless while someone called the police.

No longer asking, "Who is Banksy", many strolling New Yorkers this October were only half-kidding when they would point to nearly any scene or object on the street and ask each other, "Is that a Banksy?" And truly, what better global brand can claim to have triggered this thought in someone's mind by not actually doing anything yourself?

That is an astounding last trick, and not one that many will ever lay claim to. 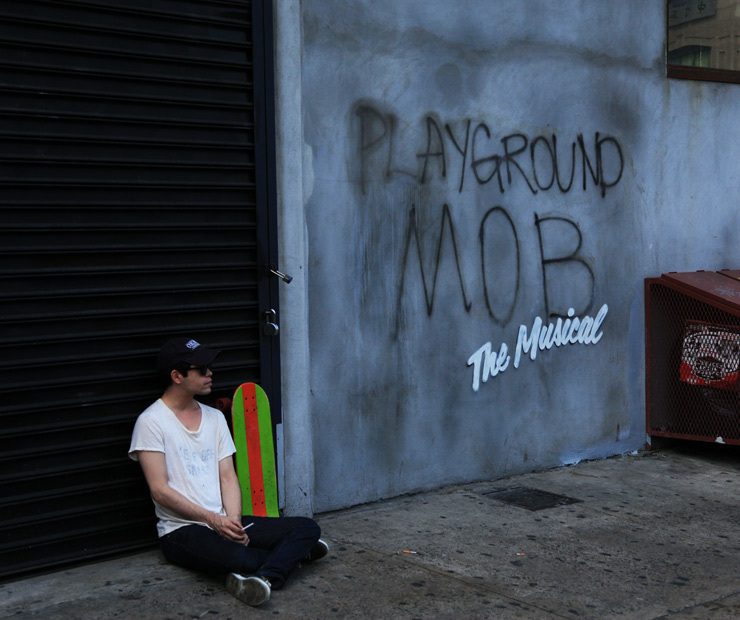 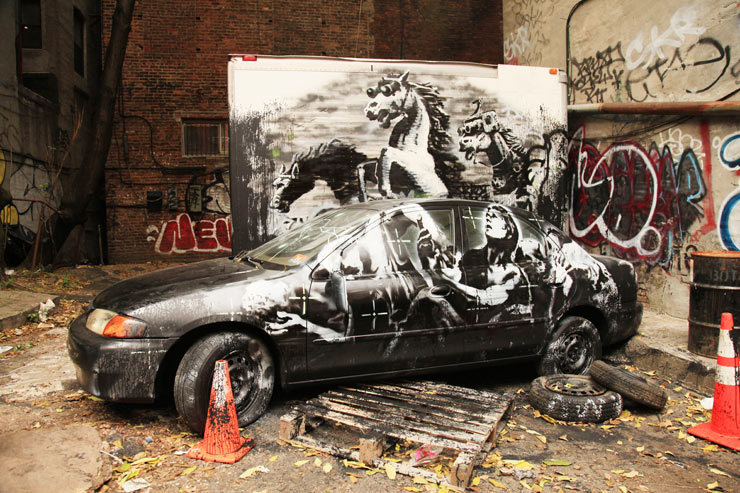 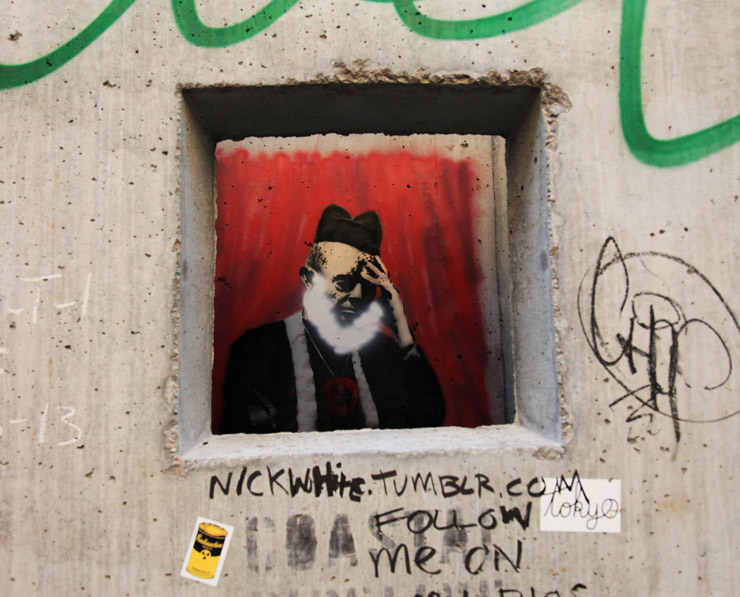 Banksy. The white beard was added by someone. (photo © Jaime Rojo) 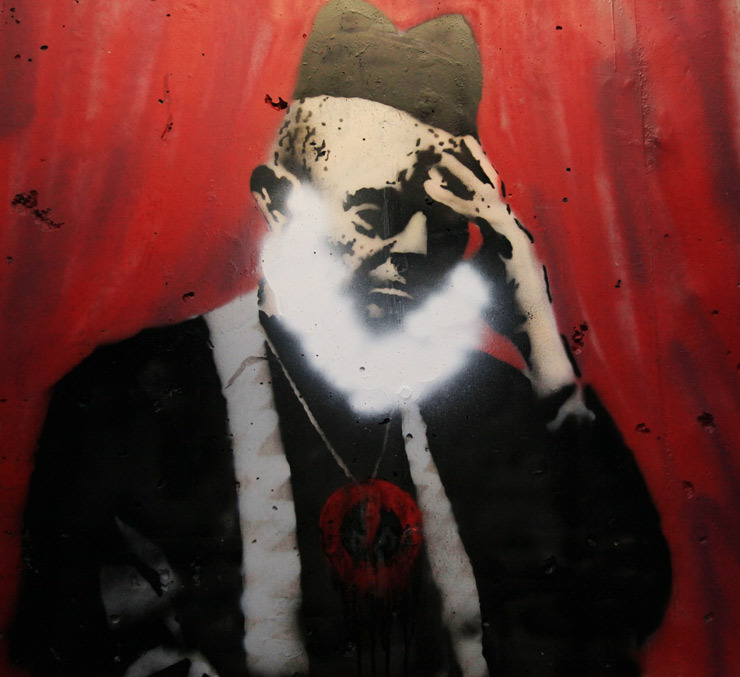 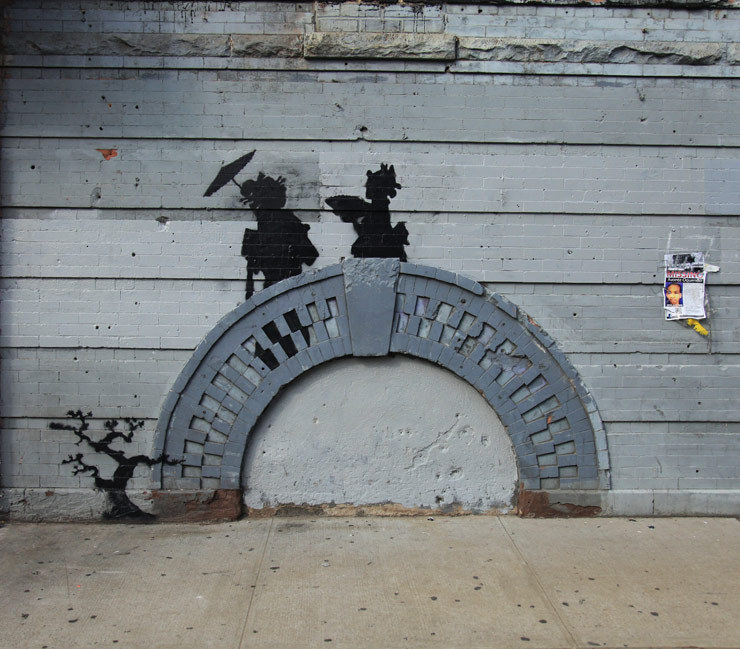 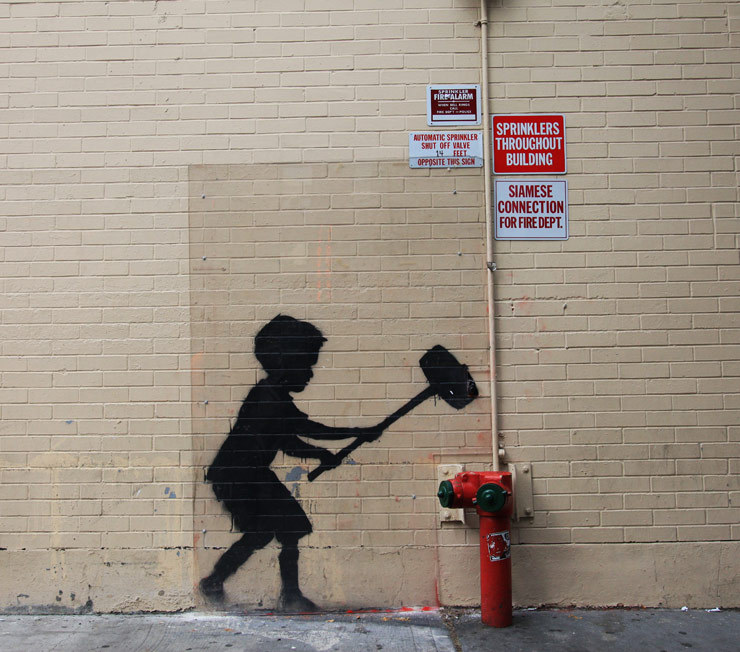 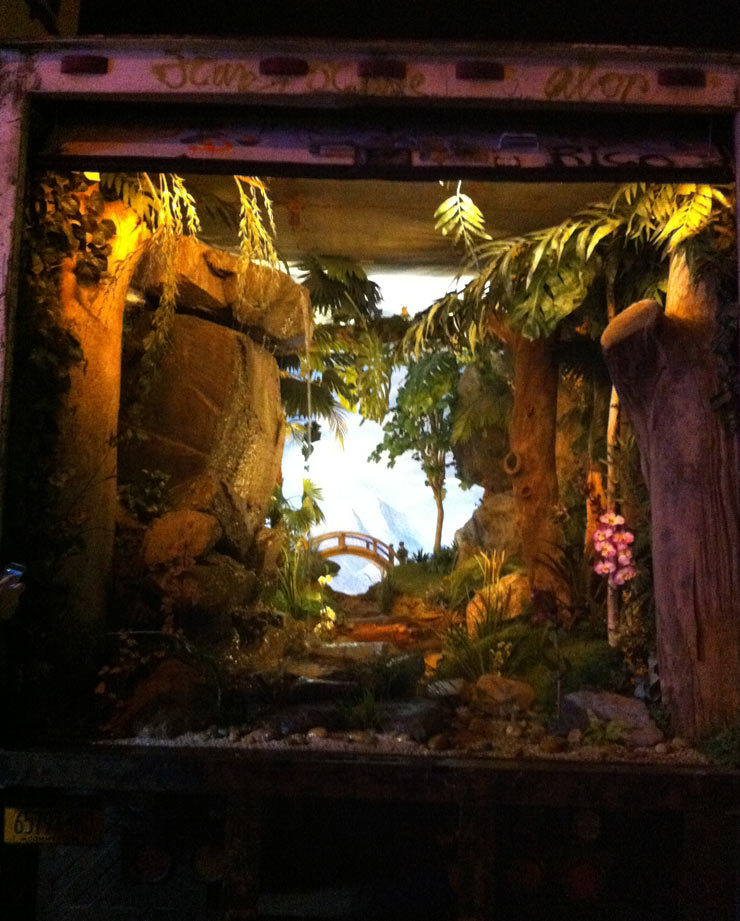 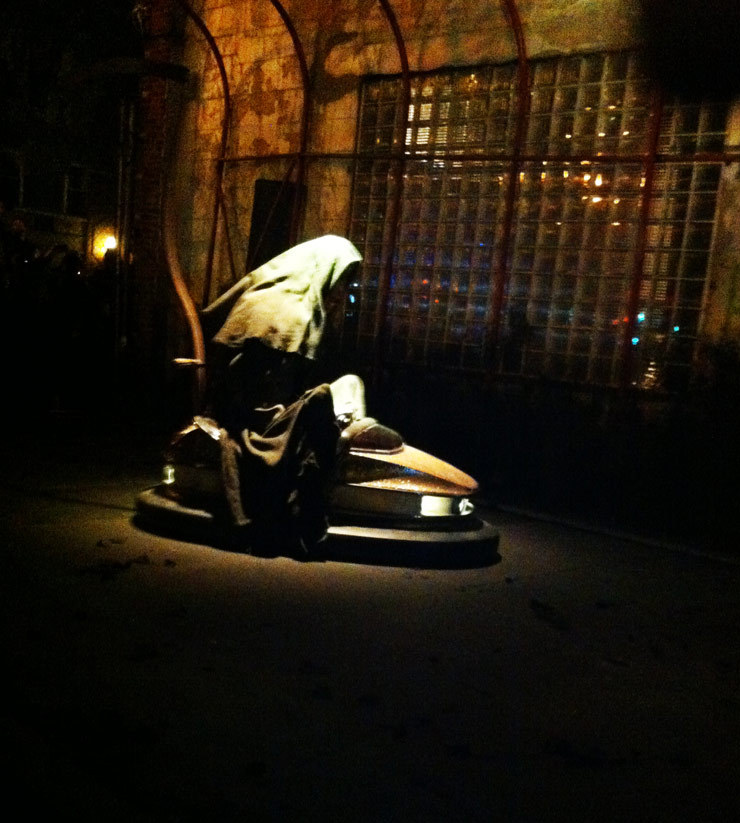 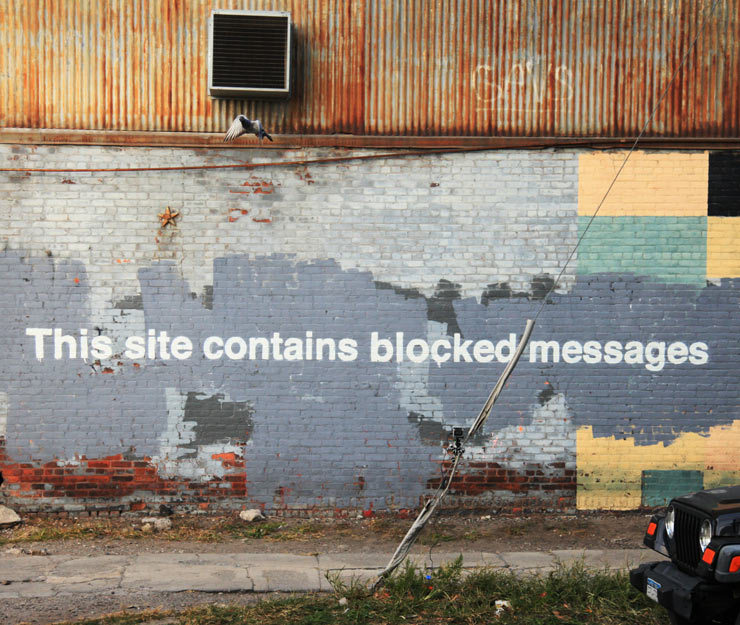 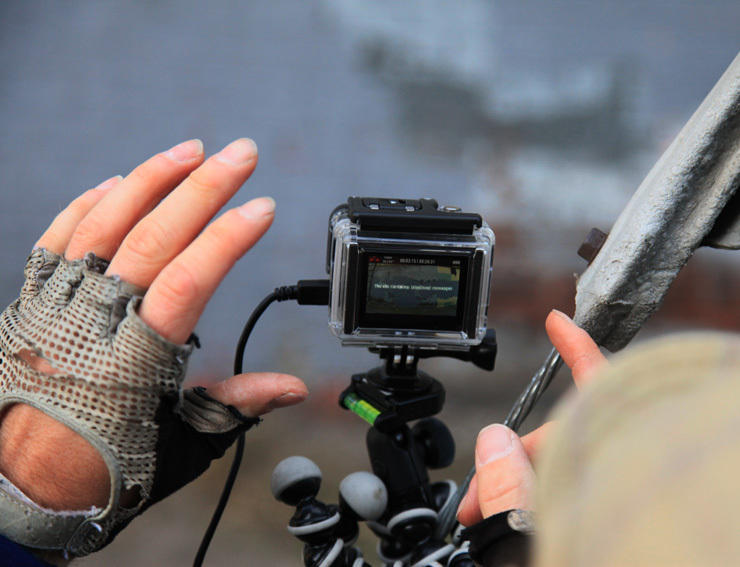