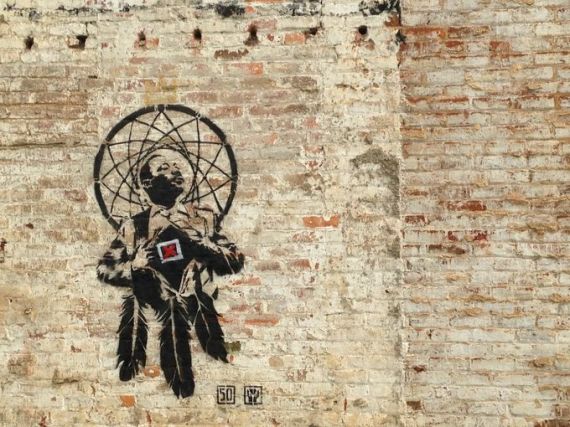 I Have a Dreamcatcher (2015), a new street art piece in Montgomery, Alabama, that some suspect is by British street artist Banksy.Photo: Rebecca Burylo, courtesy the Montgomery Advertiser.

Has Banksy been at work in Montgomery, Alabama? A street art piece featuring Martin Luther King Jr. that appeared on the side an abandoned building on March 26, the 50th anniversary of the end of the Selma/Montgomery voting rights march lead by the civil rights leader (see Martin Luther King, Jr.'s Historic Selma/Montgomery March, in Pictures), has local residents wondering if the anonymous graffiti artist has been in town, reports the Montgomery Advertiser.

The street artwork in question has been dubbed I Have a Dreamcatcher for its depiction of Martin Luther King Jr. in front of a Native American dreamcatcher. The assassinated activist and humanitarian is pulling his shirt open, and a red "X" is emblazoned on his chest.

Though Montgomery may seem pretty far afield for the British street artist, Banksy has been to Alabama at least once before. In 2008, he painted a lynched Ku Klux Klansman on the side of an abandoned gas station outside Birmingham, a piece that was quickly painted over. (It's not the only politically-charged Banksy that has not been long for this world—see Immigration-Themed Banksy Mural Destroyed by Local Council.) 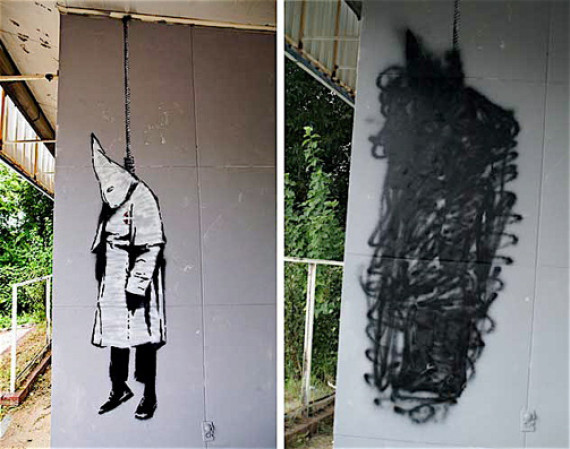 "Everything about it screams Banksy," Carolyn Wright, a local aficionado of the British street artist, told the Advertiser after examining the new mural.

Of course, artists from the area, such as Richard Cecil Hagans, known as R.C., who works in a similar style to Banksy, are also suspects. Witnesses claim to have seen a man in his mid-twenties painting the work, perched on a ladder marked with the initials "R.C."

While R.C. declined to confirm or deny his involvement with I Have a Dreamcatcher, telling the Advertiser that to do so would be incriminating, he did make it clear he doesn't think the piece is by Banksy. "If it were him, it would be more controversial, pushing people's buttons a bit more. That is just a nice poignant almost political picture, but it's not his style."

The Advertiser also spoke with Kathy King and Richard McPherson, who work in the area and claim to have spoken with a local art student dressed in paint-spattered clothes on March 26. He showed them a photo of the Martin Luther King Jr. Dreamcatcher image on his phone, asking who he might speak with about getting permission to paint it on a local building.

Montgomery might be better off without a Banksy of its own, however, considering how often his works get vandalized (see Vandals Completely Deface Banksy's Spy Booth, Banksy Vandal Can Avoid Jail by Paying $13,000 for Restoration, and Vandal Destroys Germany's Last Banksy Mural), and how hard they are to sell (see SXSW Documentary Shows You How to Sell a Stolen Banksy).