As swiftly as it appeared, the latest Banksy mural to adorn the streets of New York City has been white washed.

The stencil showed up in the city yesterday, the beginning of what Banksy calls his attempt "to host an entire show on the streets of New York." The image, painted in Chinatown, featured a young, barefoot boy standing atop another figure's shoulders, reaching for a can of spray paint hidden inside a "Graffiti Is a Crime" sign. 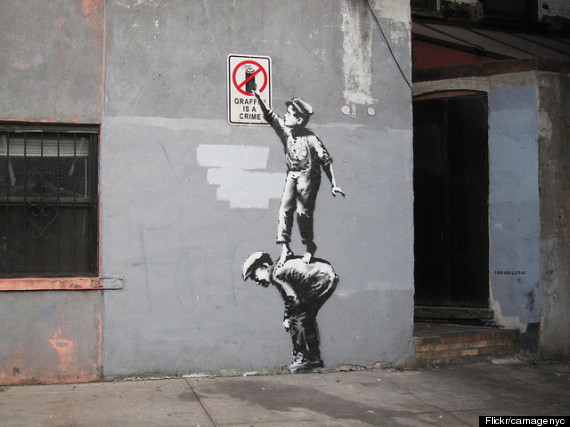 Alas, the street art work was erased overnight, mysteriously painted white sometime this morning, reports The Low Down New York. The Banksy piece had already become a hot spot for local taggers, as a group called Smart Crew removed the original "Graffiti Is a Crime" sign last night and replaced it with a logo-ready substitute that read "Street Art Is a Crime." But the white washing officially removed the Banksy work from sight.

In case you're still curious about Banksy's artist residency in the Big Apple, titled "Better Out Than In," the cheeky graffitist has set up an 800 number fans can call "to enhance your enjoyment of the exhibits" to come. The number (1-800-656-4271#1 for the recently erased work) leads to an audio guide with prompts meant to be listened to next to his various murals.

The first audio clip seemed to perfectly foreshadow the Banksy erasure: "Before you, you will see a spray art by the artist [Banksy]. Or maybe not -- it’s probably been painted over by now."

For what it's worth, The Guardian's Jonathan Jones is probably quite amused by the Banksy antics occurring in NYC. "Myself, I wish Banksy would go and see Jackson Pollock's One at MoMA, look at it until he sees how dull and lifeless his own art is by comparison, and retire," he recently wrote.

UPDATE: It looks like there's already a new NYC Banksy mural. This image was posted to the street artist's Instagram account today. We're guessing the work is somewhere on the "Westside," given that's the title of the piece.