And he stars in a piece of street art that appeared recently at an informal refugee camp in Calais, France, and has been attributed to the British artist known as Banksy.

The encampment, nicknamed "the Jungle" for its chaotic, squalid living conditions, is home to some 7,000 predominantly Middle Eastern refugees hoping to migrate to Britain.

As the Paris attacks have led to fear-mongering that terrorists may hide among the streams of refugees, Banksy's work is a reminder not to let fear steer policy. Steve Jobs was himself the son of a Syrian refugee who immigrated to the U.S. from Homs.

According to the BBC, Banksy issued a statement saying, "Apple is the world's most profitable company, it pays over $7bn (£4.6bn) a year in taxes - and it only exists because they allowed in a young man from Homs."

A second stencil in the Calais town center shows a boat full of distressed and drowning people desperately waving for help. A yacht passes by on the horizon, apparently oblivious to the plight of those nearby. The piece was clearly inspired by “The Raft of the Medusa,” a famous French Romantic painting that depicts the aftermath of a 19th-century shipwreck.

The image caption online explains: "We're not all in the same boat."

Lazarides, a former agent for Banksy, could not be reached for comment on the authenticity of the Calais works.

In September, the artist shut down "Dismaland," a parody amusement park in England, and announced the building materials would be shipped to Calais to be repurposed as refugee shelters. 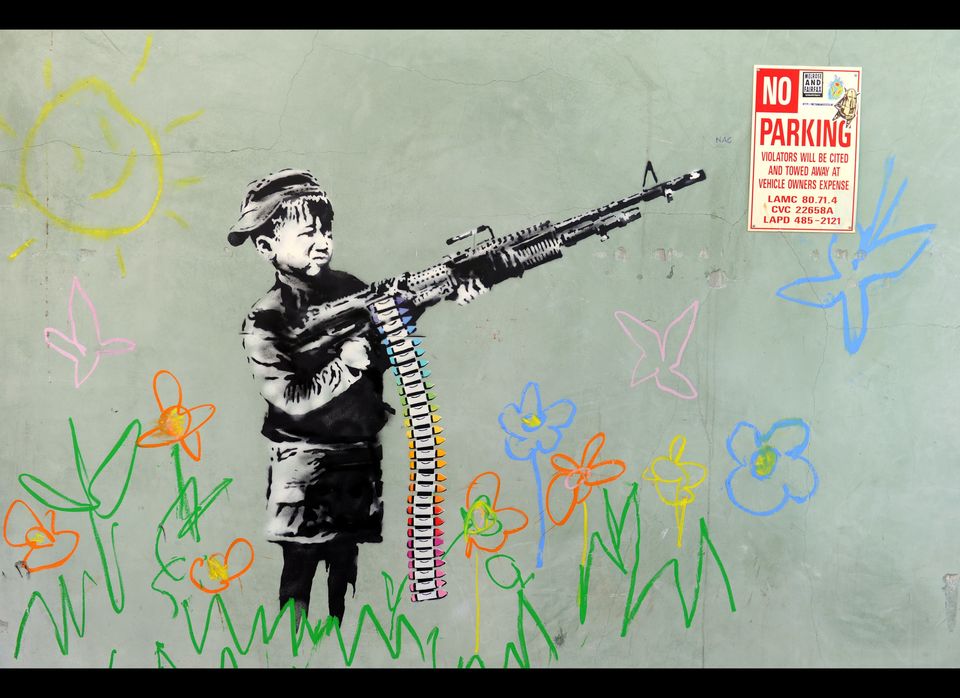 1 / 22
A graffiti attributed to secretive British artist Banksy depicting a child wielding a machine gun, in black and white surrounded by colored flowers, is spotted in Westwood, California on February 17, 2011.
Getty