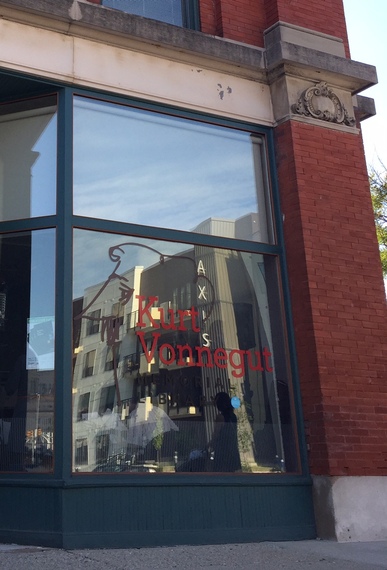 Here it is already again, Banned Book Week at the Kurt Vonnegut Memorial Library. Used to be it was merely colored leaves and jack-o-lantern decorations that heralded the arrival of the Autumn season.... Downtown Indianapolis, there even sits a Dean of Libraries at DePauw University, imprisoned as any performance artist might be,whiling away the hours musing, blogging and inviting keen if not discomforting awareness to something huge we should not ever begin to take for granted....

Tis the season to once again celebrate our most cherished freedom of expression and our collective Right to speak our heart and mind (for better or worse - a relative thing) via the commemoration of all the books, the words, the people, the stories that were at some time or another squelched and silenced, whether in the guise of self-righteous, "gentle" blankets of censorship, or by worse and more extreme, abrupt and violent means.

At last year's Banned Book Week, I had the honor of conducting a read-aloud at the KVML. My selection the award-winning 1983 publication, Little Red Riding Hood, re-told and gorgeously illustrated by Trina Schart Hyman. This book was a hit to be sure, and duly celebrated, but its most enduring renown lies in its having been banned:

Dearest Reader, is that the green glass of what is clearly a bottle of wine in your little basket? (Egads - there was mention of the wine in the text too...) Forget any eyebrows ever having been raised by the unmitigated violence implied and/or obvious in a classic Brothers Grimm story such as this. Red Riding Hood stands rank and file with the best of them: The Great Gatsby, Catcher in the Rye, The Adventures of Tom Sawyer, the Harry Potter series...I could go on and on. Online lists abound; here is one posted at the KVML site, which in and of itself is a fascinating read.

Banning a book is, in typical, ironic societal fashion, a way to ensure its notoriety, which ensures its longevity as a best/or at least well-selling publication. This interesting fact is not lost on any artist. From rapper to reality diva - to shock n awe is to sell, isn't it? Still, it would be lovely to not have cows that rise to supreme court level over oh, so very many forms of expression. It would be nice to teach open-mindedness as a means to grant opportunities for relevant discourse when confronted with the difficult or offensive - or the new.

Elvis-Pelvis shockability is as alive and well as it always was, as a temporary and evolutionary state of Angst: the edgiest rockers of yesteryear wind up hosting prime-time holiday family shows and singing with puppets - and all tune in.

My copy of Little Red Riding Hood I donated to the library - it's somewhere in the stacks of books that now surround the esteemed Dean. I dedicated my reading of that book to my oldest son, who served as a marine, and to my paternal grandfather, a Ukranian man executed - long ago and far away - for his anti-communist protests and activities.... I write because of these people - and I write because I can.

Let us honor all who speak up and out and let us celebrate and support the Arts, and in the context of Banned Book Week, most specifically the beautiful written word. The pen is both a mighty weapon and a magic, radical wand.

What is your favorite/most memorable Banned Book?

KVML facade photo by Kimann, used with permission of the library