Instagram is bringing #sexyback. Along with #foodorgasm, #DuckDynastyBitch and #boobz (but not #boobs).

The photo-sharing service has lifted its ban on more than 100 previously unsearchable hashtags, according to new analysis posted Sunday by entrepreneur Nick Drewe on his blog, The Data Pack.

Drewe also found over a hundred terms still banned by the photo-sharing service, ranging from the salacious (#nude) to the dubiously legal (#weed) to the seemingly-innocuous (#iPhone).

The research lands amid a week of ongoing controversy over gun sales via Instagram. Users often rely on hashtags such as "#gunsforsale" to publicize available arms, raising questions about why some terms, but not others, are banned on Instagram.

While Instagram’s members can still include the blacklisted hashtags in their photos' captions, a search for these terms returns no results. For Instagram, this approach offers a quiet way of censoring content that it wants to discourage on its service, or which violates its policies.

Two months ago, Drewe published an incomplete list of over 200 hashtags banned by Instagram, which he cobbled together by testing which words either returned no search results, or triggered a “this tag cannot be viewed” error message from the app. 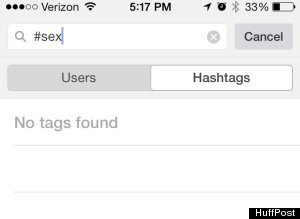 Drewe recently retested his initial list of banned terms, and found that dozens had been removed from Instagram’s blacklist. As Drewe noted in his blog post, Instagram’s initial list was quite crude in its approach: essentially any hashtag containing a trigger word, such as “#f*ck,” would be blocked, meaning relatively benign terms like “#JamesMotherF*ckingFranco” were unsearchable.

While “#sex” is still banned, “#TheSexPistols” is now permitted. “#F*ck” still won’t fly, but more than sixty hashtags that contain the four-letter expletive are searchable once again.

Certain hashtags have been reinstated with a warning that appears before the search results. The term “#thinspo,” frequently attached to photos that advocate anorexia or bulimia, will show up with information on where to find help with eating disorders. 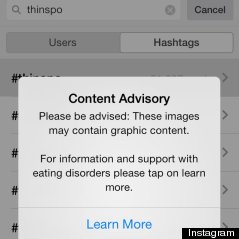 “We want Instagram to be a safe and fun place for people to capture and share moments,” she wrote in an email. “That means finding a good balance between allowing people to express themselves and providing protections to prevent certain content that would be against our terms.”

People might be puzzled to find some ostensibly harmless terms, such as “#iPhone,” #”iPhone 4S,” “#Instagram” and “#iPhoneography,” are still banned. These tags are so popular that they deliver overly-broad results and can be used to spread spam through the social network. As Instagram co-founder Mike Krieger noted on a Google forum last year, the photo-sharing service stopped showing search results “for some tags that were too generic and didn't provide enough end-user value.”

Other still-unsearchable terms, such as “#penis” or "#nude," are likely to surface images that run afoul of Instagram’s terms of service, which prohibits posts that are pornographic, nude, partially nude or sexually suggestive.

But this presents some odd inconsistencies. While “#underwear” and “#lingerie” are banned -- much to the chagrin of at least one lingerie blogger -- “#boxershorts” and “#tightywhities” are A-OK in Instagram’s book.

And while hateful and discriminatory speech runs counter to Instagram’s terms of service, not all slurs are censored equally. The hashtags “k*ke,” “sp*c” and “n*gger” are banned, while “ch*ink” was recently moved off the blocked list, according to Drewe. There are some bans that just don’t make sense: “#boobs” won’t fly, “#boobz” -- recently approved -- will.

Drewe said in an interview that he hasn’t checked to see whether new words were added. But he points out that certain approved terms like “#passport” are being used to share photos that violate Instagram’s policy against sharing “national identity numbers.”

“Is identity theft more serious than another piece of content that someone else can potentially post? ... Do you have to start putting a warning on anything that could display harmful content? ” Drewe asked. “If you decide your intention is to protect your users where do you draw the line?”

"You start to go down a censorship rabbit hole that never ends," he added.

But that censorship is more of a suggestion than a complete ban: last month, Drewe introduced a tool that lets people see the photos tagged with Instagram's banned hashtags.