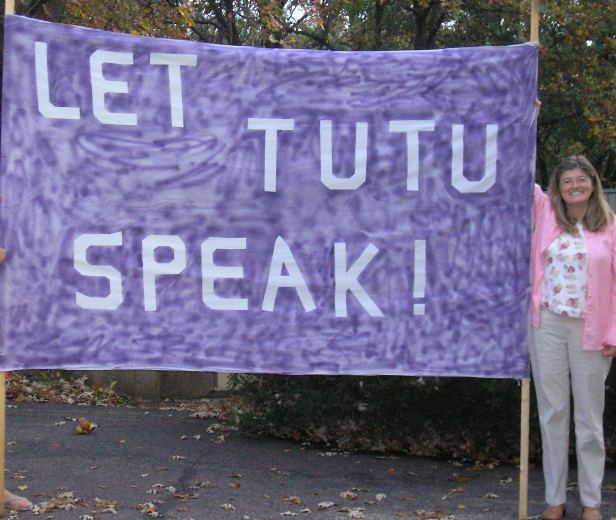 Last Tuesday, a couple of friends and I went to see the fantastic movie biography Pete Seeger: the Power of Song. It featured great musical clips that told the unique life story of the folksinger and songwriter whose rendition of "We shall Overcome" inspired the civil rights movement (and anti-war movements). The inspirational movie also served as a timely reminder of the painful repression and vicious backstabbing that resulted from Joseph McCarthy's communist witch hunt back in the early 1950's. For a huge chunk of Seeger's life--17 years!--he was blacklisted. It was not until late in 1967 that the repression finally ended when the Smothers Brothers (courageous Comedy Hour) invited Seeger to perform on their TV show. And even then one of Seeger's songs, "Waist Deep in the Big Muddy," was censored. Only months later was he allowed to sing it on TV. No wonder the 88 year old Seeger has come to appreciate so much--as reflected in his lyrics--"the right to sing my song" that exists in America.


Interestingly enough, Natalie Maines' comments of appreciation for Pete Seeger's musical contributions in the movie do not refer to her and the Dixie Chicks' own continuing struggle against radio blacklisting. The Dixie Chicks continue to sing out even though time has not yet healed their wound (or the price paid) when they were told to "shut up and sing" or their "lives would be over."


Still, there's something so weird and surreal about the type of repressive actions engendered by McCarthy and his House Un-American Activities Committee that, even being reminded like this, we still prefer to think that kind of blacklisting could not occur any more. The illusion ended for us, however, the very next day when we opened our Twin City newspapers to find Nobel Peace Laureate Desmond Tutu banned from speaking on the campus of one of our major (albeit private) Minnesota universities. The University of St. Thomas, we were stunned to learn, had banned Tutu, one of the most important voices responsible for peacefully ending apartheid in South Africa but also one of the strongest continuing voices for peaceful change and reconciliation in the world. Moreover, St. Thomas officials had gone so far as to demote the director of their Justice and Peace Studies program who had invited Tutu to speak.


Our papers and blogs were soon abuzz with comparisons of the fact that the very same campus had welcomed right-wing hate monger Ann Coulter a couple of years ago. (Coulter is known for her controversial and violent speech directed toward a variety of groups, including advocating the "wanton" bombing of Muslim countries, the execution of their leaders, public torture and a nuclear attack on N. Korea as a "warning" to the rest of the world, as well as her famous 2004 response that "I think a baseball bat is the most effective way these days" to talk to liberals.) So it was especially weird--to the point of even being noted by conservative editorialists--when St. Thomas gave its reason for banning Tutu and subsequently demoting the professor who oversaw their "Justice and Peace Studies" as due to the fact that persons on the Minneapolis Jewish Community Relations Council, when queried, found some of Tutu's public remarks "hurtful." Also quickly noted was the apparent hypocrisy of the St. Thomas Law School in hiring (and then staunchly defending its hiring of) Robert Delahunty, a former Department of Justice attorney who co-authored the Torture Memo with John Yoo which recklessly and erroneously concluded that the laws of war did not apply in Afghanistan, and international law has "no binding legal effect on either the President or the military". Wouldn't most people say torture is, by definition, "hurtful"?


So how in the heck could we have gotten so quickly to this dark place of blacklisting and suppression of academic freedom? To this sad moment in time where a Nobel Peace Prize winner's views on peace are not welcome? To a point where the very concepts of peace and social justice appear under attack?


Maybe upon deeper reflection, we didn't get here all that quickly. Academic freedom has already been taking noticeable hits with professors around the country being fired or denied jobs seemingly based on political litmus tests, whisper campaigns and/or discussions behind closed doors. Just in the past couple years, the University of Michigan's pre-eminent Middle Eastern historian Juan Cole was blackballed and rejected for a post in Middle Eastern history at Yale; DePaul Professor Norman Finkelstein was denied tenure; and Duke Law Professor Erwin Chemerinsky was, at least for a time (before public outcry led to their reversing their decision), denied the deanship (after he was promised it) of a new law school at the University of California, Irvine. The bizarre reason given for withdrawal of the deanship to Chemerinsky was that he was "too politically controversial," pointing to an Aug. 16 op-ed article in the Los Angeles Times in which he criticized a plan to speed up death penalty appeals. That type of apparent academic repression so flabbergasted the legal world, that Chemerinsky was (luckily) re-offered the deanship in California. But these types of red flags have been going up for some time revealing academic freedom increasingly under attack in this country. Maybe we shouldn't be surprised that James Madison's warning that "no country can maintain its freedom in the midst of continual warfare" is also manifesting itself on campus.


It's true that St. Thomas is a private university under the auspices of the Roman Catholic Church. And a quick check of Federal Election Campaign records show that only three or four members of the St. Thomas Board of Trustees contribute to Democrats (including one who is a Democratic candidate for U.S. Senate, Mike Ciresi) while the overwhelming majority of their board members--over twenty--have a history of contributing to Republicans. Certainly it's also true that a private institution is free to select or hire whatever speakers or professors they think fit better with what the institution wants to teach or get across to its students who can then choose whether or not to attend. The best universities, public and private, tend towards more academic freedom but during times of politicization and war, more repression and McCarthy-like whisper campaigns historically surface even in academic institutions, entertainment, the news industry, etc.


Suppression of ideas works best behind closed doors. The best antidote is therefore simple sunshine and tolerance. So if St. Thomas officials and its more Republican-leaning Board of Trustees want to go in this direction, choosing Ann Coulter's message of hatred over Desmond Tutu's message of peace, that's up to them but students and faculty, and the wider public need to be fully aware of these developments. The press should fully cover this and other such cases so people are made aware of the issue, St. Thomas' predilections and, to the extent the media can find out, of the private discussions, pressures and labeling that occur. In the case of Chemerinsky, all that was needed was a public airing of these things and the legal community's righteous outrage for officials to recognize the error of their ways and reverse their decision. As a member of the St. Thomas Board of Trustees, Mike Ciresi is someone who now has an opportunity to exercise some leadership. He ought to publicly request his alma mater reconsider its decisions to ban Tutu and to punish their Justice and Peace Program if, for no other reason, than to maintain St. Thomas' reputation for academic excellence and fairness.


When I sent an earlier draft to one of the ladies who went to the Pete Seeger movie with me, her response was that "icky" sounds childish. Precisely! But what word better describes St. Thomas' childish stance?!