With only about 2,500 giant pandas in the wild, each bear is special; but this especially terrific black-and-white munchkin is getting some well-deserved extra attention this weekend. On Saturday, the National Zoo is celebrating Bao Bao's first birthday. There'll be panda-related games, panda-themed entertainment and more.

For fans who can't make it to D.C., we asked our favorite panda-obsessive, Doxiemom Pandamonium -- an enthusiast who spends some eight hours a day watching panda cub live streams, then making highlights videos of these babies' best moments -- to share her top 10 Bao Bao milestones from the last year. 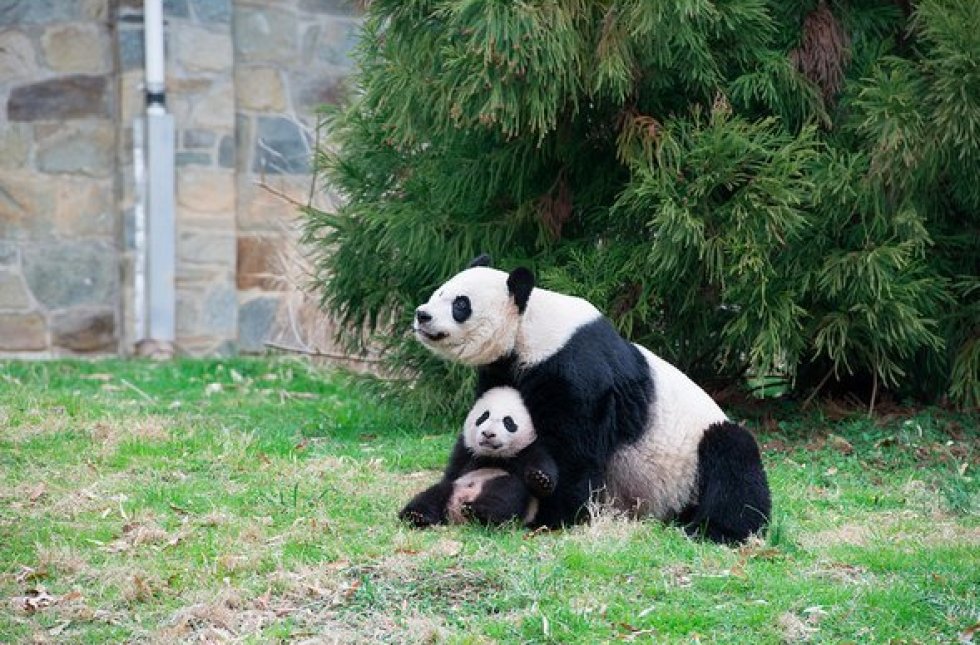 Bao Bao with mom Mei Xiang on April 2, 2014. It was the little one's second time outside.

Bao Bao's Birth
"I was watching Panda Cam but due to internet traffic I didn't see her birth live but I did hear her first cries," Doxiemom Pandamonium told The Huffington Post in an email. "Such a joyous sound!"
Before The Government Shutdown
"I spent the evening with Mei Xiang and Bao Bao. Bao Bao was alone and had the hiccups," Doxiemom Pandamonium said. "Mei Xiang came back and scooped her up and gave her a bath, and the camera zoomed in. Awww!"
Bao Bao's First Trip Outside With Her Mother
It was April 1, and it was adorable.
Windowsill Walking
"Around the 1st of April, Bao Bao discovers a hidey-hole in room three. I recorded all night as I was curious if she'd leave her spot and she did a few times, only to return back up to her private corner," Doxiemom Pandamonium said.
Bao Bao Beats The Barrier
"Bao Bao pulls herself up onto the window sill beyond the barrier in room two," Doxiemom Pandamonium told HuffPost. "I could not believe it!"
Dining Al Fresco
"Bao Bao nursed outside, the one and only time I've seen her do this."
Bao Bao's Little Tumbles
Doxiemom loves when Bao Bao tumbles down her hill. This video of her wee plunge out of a tree will also make you fall for our girl.
Taking A Stroll
"If her paws are wet she leaves paw prints," Doxiemom said.
Splash Time
Playing in the water "showed how far she's come getting used to the wet stuff," noted Doxiemom.
Bao Bao And Her Mommy
"My favorite part of watching a mother giant panda raise her young is watching her nursing her cubs, and their play bouts."

Is your favorite Bao Bao moment on the list? What will you be doing to celebrate this Saturday? Tell us in the comments -- and get in touch at arin.greenwood@huffingtonpost.com if you have an animal story to share!