This week, Bao Nguyen takes office as mayor of Garden Grove. He is the city's first Vietnamese American mayor and its youngest ever to hold that office, having beat out his opponent and six-time incumbent Bruce Broadwater by just 15 votes.

For Vietnamese residents his win points to a change the politics of Little Saigon -- the heart of Garden Grove's sizable Vietnamese community -- which have long been defined by Cold War memories and simmering hatred of the government in Hanoi.

Born in a refugee camp in Thailand and raised in California, Nguyen got a taste of Little Saigon politics in 2000 when he organized a protest against then presidential-hopeful John McCain, who traveled to the area to rally support among Vietnamese American supporters. Appearing with fellow students from UC Irvine, Nguyen showed up wearing a T-shirt scrawled with the words "American Gook" across the front. 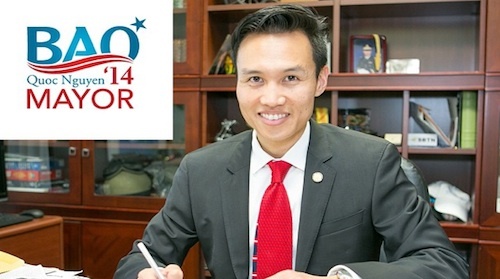 "We are Americans, not gooks!" Nguyen screamed through a bullhorn, recalling McCain's oft-repeated description of his captors as a POW in Hanoi. It's a phrase McCain has refused to apologize for.

A scuffle broke out at the rally, with McCain's Vietnamese supporters pushing Nguyen and his group into the street.

"They were pinching us, throwing dirt at us," Nguyen recalled for the 2004 PBS documentary "Saigon, USA." He added, "Here's my community -- the people pushing me out into the street were older Vietnamese Americans."

Departing from the 'old script'

Some 14 years later Nguyen is now the mayor of that same community, though getting there involved reaching beyond ethnic loyalties.

"Other elected [Vietnamese American] officials have banked on locking up the Vietnamese vote, [then hoping] for a good enough percent among other ethnicities," explained Hao-Nhien Vu, a long time insider of Little Saigon politics and former editor of the Vietnamese language newspaper Nguoi Viet.

Not Nguyen. His victory marks a departure from the old script.

Nguyen began his political career by first reaching out to the Latino community, learning Spanish and working with the Centro Cultural de México, a community space for the area's Latino residents. His efforts won him a seat on the Garden Grove Unified School District in 2012, and again paid dividends last November.

Local media took note of the young candidate's strategy of diversifying his support base. The OC Weekly reported that Nguyen switched from Spanish to English and Vietnamese as he addressed a crowd of mostly young supporters made up of Arab Americans, Latinos, whites and Vietnamese.

The paper compared that to Republican Janet Nguyen (no relation), who won the 34th district state senate seat in Orange County, and who made her career by "pitting Vietnamese and Latino voters against each other."

Putting on the 'red cap'

For Vietnamese Americans in Little Saigon, the business of regime change in Hanoi often means keeping Little Saigon itself from changing. And when change threatens, defenders of the status quo there have long relied on the time-tested strategy of "Chup Mu" -- to put a red cap on someone.

In other words, paint them as a communist. 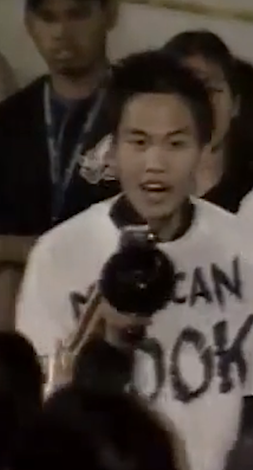 Bao Nguyen rallying UCI students in 2000 at a protest against senator John McCain.

"Redbaiting tactics are common in Orange County politics, especially where Vietnamese voters are influential in elections," wrote Nguyen in an email to reporters after a mailer portraying him as a "communist-worshipping propagandist" was sent around to Vietnamese voters allegedly by supporters of Broadwater.

Still, chup mu can backfire. There have been several cases of libel having been filed. Plaintiffs in some of those cases have been awarded hefty sums.

In fact, Little Saigon's relationship with Vietnam is a complicated one. Each year tens of thousands of Vietnamese Americans return to the country for Tet, Vietnam's lunar new year, while overseas investments are on the rise as more and more expats return to work, retire or marry there.

Indeed, as we approach the 40th anniversary of the end of the Vietnam War and the beginning of the Vietnamese Diaspora, Little Saigon itself looks to be falling back into the orbit of the homeland from which it was once exiled -- despite its rhetoric.

"In essence, everyone is connected to Vietnam to some degree," says one veteran observer of politics inside Little Saigon who asked not to be named. "And those who scream and yell the loudest are often just as connected if not more to Vietnam."

Observers say Nguyen's semi-outsider status sets him apart from the thorny question of Hanoi and gives him enough room to effect real change.

His campaign focused on increasing citizen participation and improving transparency in city hall, including by putting the city's budget online. He's also been outspoken in his support for small business and for programs that help seniors and kids.

"Bao is not beholden to any particular power group within the Vietnamese-American community," said Vu, "so he can call things for what they are."

As an example, Vu noted that while other politicians -- fearful of a conservative backlash -- didn't stand up for gay and lesbian groups hoping to participate in Little Saigon's Vietnamese New Year parade in 2013, Bao spoke up.

The young rabble rouser once pushed to the curb by his own community has found his own center, and in doing so has managed to rearrange Little Saigon's political culture as well.