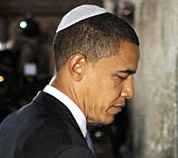 If Bill Clinton famously was -- according to Toni Morrison and many members of the Congressional Black Caucus -- America's First Black President -- then surely Barack Obama can lay claim to being America's First Jewish President!

Unlike George W. Bush who had no use for Jews in his inner circle ("none of my best friends are Jewish") only allowed one token Jew into his personal orbit -- the oleaginous Ari Fleischer whose major contribution to the common good was immediately after 9/11 telling all Americans that they "need to watch what they say". Alas advice that was not heeded by his goyish puppet-masters.

Bush's attitude towards Jews -- like most Gentile neo-cons, fundamentalists and evangelicals -- was that they would come in very handy dying at The End Of Days - and thus bringing about The Rupture (sic) which would be the Open Sesame to Heaven. So Ari... bubbeleh... to that Texan 'yok' you were just a Token Yid to have on hand. (There was not one Jew in his entire cabinet). And you delude yourself if you think you were anything more than that.

What a startlingly good contrast to look at Barack Obama's positive and ecumenical attitude. First of all one can see that his choices are based not on race, religion or creed -- but on merit and excellence. And that means that he is inclusionary not exclusionary.

It is impressive to see the number of Jews that Barack (his name means "blessed" in Hebrew as well as in Arabic and Swahili) Obama is already surrounding himself with. Doubtlessly to the chagrin of the anti-semitic, right-wing who endure the official Republican faux-tolerance to Jews through gritted teeth as just one of those awful accommodations with the devil one has to make to achieve electoral success. In fairness to those right-wing nut jobs -- they are not just anti-semitic. They are anti-Black, anti-Hispanic, anti-Gay, anti-Feminist, anti anyone else who isn't like them -- ignorant white trash (of varying fiscal pedigree - you can be rich and still be trash) -- in-bred within one chromosome of insanity.

Just look at who Barack Obama has already brought to his team:

Proud Jews all of them.

And look also at his impressive record of support for Jewish causes and Israel earlier in his political career in Chicago.

I'd say that Barack Obama has a claim -- notionally - to be America's First Jewish President.

I hadn't looked till after writing the above column - but I just did a search on HuffPo for "First Jewish President" and discovered that a couple of my fellow HuffPo bloggers had arrived at the same conclusion -- albeit for different reasons -- before me. Harold Pollack did so in January of this year in a very funny megilah. And Adam Hanft came to this view in a more serious vein in June of this year. So props to Harold and Adam. Shkoach!