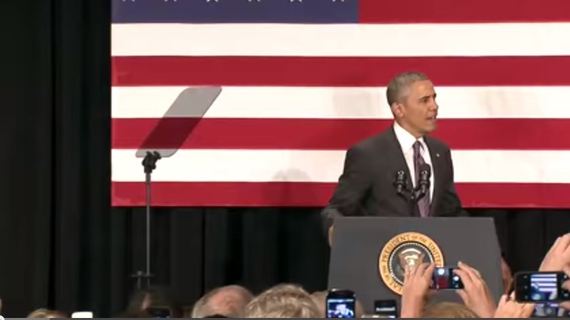 If there's one thing US President Barack Obama understands, it's the danger of sticker shock.

He was addressing the League of Conservation Voters, and he went on to warn that environmentalists who ignore those rising prices do so at their own peril:

"If we're blithe about saying [climate change] is the defining issue of our time, but we don't address people's legitimate economic concerns, then even if they are concerned about climate change, they may not support efforts to do something about it."

It's a point well-taken, and one that's addressed in one of the longest-running environmental successes in the country, which the President also defended on Wednesday: the Clean Water Act:

"We've got to dredge up that old tape of the Cuyahoga River on fire, and the Chicago River, and just remind people that this thing [the Clean Water Act] worked," he said.

He could have added that one reason "this thing worked" is that it doesn't just keep nasties out of our water. It also provides mechanisms that address exactly the concerns he warned about. Those mechanisms, paradoxically, let land developers disrupt environmentally significant swamps (or "wetlands") that filter water and regulate floods.

This great success works in part because it lets bad things happen.

But there's a catch: this degradation can only happen under very limited circumstances and only after a rigorous permitting process. More importantly, it can only happen if the developer compensates by either restoring, creating, or in some cases preserving an endangered wetland area of equal or greater environmental value than what is lost.

This ingenious mechanism, which dates back to the 1970s, has led to the creation of wetland mitigation banks, which are private conservation efforts that proactively restore degraded wetlands in the hope of selling credits to developers down the road. Because mitigation banks tend to be built on land adjacent to intact swamps, they often create more contiguous wetlands that deliver more ecosystem services - like filtering water - than do the isolated patches of degraded swamp that are destroyed.

This is one of the great unsung successes of the 1970s environmental boom, and it succeeds because it doesn't let the perfect become the enemy of the good. Something similar is happening under the Endangered Species Act, which allows for development on habitat under very limited circumstances and only if habitat of equal or greater value is restored, created, or preserved.

These things work, and they work so well that the European Union is incorporating similar mechanisms into its environmental strategy.

Similar things worked on acid rain in the 1990s, when the state of California implemented its Regional Clean Air Incentives Market (RECLAIM), which put a cap on the amount of sulphur and nitrogen oxides (SOx and NOx) that industry can pump into the air, then it let the private sector identify the most efficient way of meeting that cap by trading allowances.

Then as now, right wingers went apoplectic - predicting everything from rolling blackouts and soaring energy costs to the end of the coal sector and a nationwide recession. Left wingers had the opposite fear; they believed industry would just "buy its way out" of its clean air obligations, and likened the permits to indulgences.

Both sides were wrong. The program has helped cut acid rain in half since its inception, and at a cost of just $3 billion per year, which is more than 85% lower than industry projections. More importantly, it saved local communities more than $122 billion per year in reduced health costs and cleaner lakes and rivers, according to a study by the Journal of Environmental Management. That's $40 in savings for every $1 spent - although the EPA prefers the more conservative claim of $30 for every dollar spent.

And that brings us to something else the president touched on: education. When he alluded to "that old tape of the Cuyahoga River on fire", everyone above a certain age knew exactly what he was talking about. Back then, the general public was confronted with very tangible evidence of our environmental challenges. That's why we were able to implement mechanisms that work.

Climate change isn't as tangible as a burning river, but that hasn't stopped 70% of the public from understanding that it's a threat. The challenge now is to make sure people understand just how serious and immediate that threat is so that they can make intelligent and informed decisions about how to proceed - perhaps by pointing out that food is a more fundamental need than even gas and electricity.

That's because food is where rising temperatures are going to extract their highest toll. The US Climate Assessment made that point quite clearly a few months back, when it warned that that climate change is already disrupting global food supplies. That's why 16 retired US admirals and generals recently took the unprecedented step of warning that climate change threatens our national security.

And it doesn't stop with climate change. Our entire green infrastructure is at risk, but most people aren't even aware that such a thing even exists. They don't know that wetlands filter water and regulate flooding, or that mangroves protect our coasts and forests clean our air.

These are the functions that keep us alive, and they're why conservation isn't something we should do, like trimming the bushes, but rather it's something we must do - like putting food on the table or shoring up the foundation. That's literally what it's about, because when you get down to it, our economy depends on our ecology, since everything we buy, sell, eat, and produce is derived from nature.

This is the reality we must ultimately acknowledge, because although higher energy costs aren't a foregone conclusion in a carbon-constrained world, they are a distinct possibility. Environmental markets can reduce that likelihood, but they can't eliminate them.

This report was filed by Steve Zwick, the editor of Ecosystem Marketplace. The views expressed here are his alone and do not necessarily reflect those of Forest Trends or its affiliates. Follow him on Twitter.