President Barack Obama made some pit stops in the Bay Area as part of a whirlwind West Coast fundraising tour that kicked off this weekend.

He visited the Atherton home of Facebook Chief Operations Officer Sheryl Sandberg for a star-studded event that included a performance by musician Bruce Hornsby and an appearance by pop star Lady Gaga. Gaga, true to from, stole the show with a typically outlandish outfit that had the diva standing at a towering eight feet tall.

At the event, which took place under a tent in Sandberg’s yard, Gaga reportedly wore a black dress scalloped high plunge back and high heels. Her blond hair was upswept, with black flowers and black veil sweeping down back of hair.

According to a source present in the tent fundraiser, Gaga asked a question during the Q&A. She first thanked the president for what he’s accomplished, then read from what she said was a letter from a fan about the suicide of another fan who had been subjected to bullying.

That same evening, at the Woodside home of Democratic fundraiser and Symantec Board Chairman John Thompson, the President went on the offensive against his Republic opponents.

"I mean, has anybody been watching the debates lately?" he asked. Referring to Gov. Rick Perry of Texas, who has sought federal aid to fight wildfires caused by a prolonged drought, Mr. Obama said: "You’ve got a governor whose state is on fire denying climate change. It's true. You've got audiences cheering at the prospect of somebody dying because they don't have health care and booing a service member in Iraq because they're gay."

On Monday morning, Obama headed to the Computer History Museum in Mountain View for an online town hall hosted by social networking giant Linkedin to pitch his $447 billion jobs plan.

"The most important thing we can do right now is to jump-start the economy by passing this jobs bill," said Obama at the event. "The vast majority of economists say the Recovery Act, and cutting taxes, made a big difference. The jobs plan won't solve all our problems. We still have too many homes under water. As part of the act, we'll help people with refinancing, provide tax cuts to small businesses and middle-class families so they can spend money on products and services, which will help businesses hire more people.''

"It's all paid for," he added, "in part by building on some very painful cuts in waste, and we're proposing an additional half a trillion spending cuts over the next 10 years."

While Obama was visiting one social network, top Republican leaders were across town at the home base of another. House Majority Leader Eric Cantor appeared with other GOP leaders at Facebook headquarters for a town hall.

Before coming down to San Francisco, Obama spoke before 1,700 ticket holders at Seattle's Paramount Theater, each of whom paid between $100 and $7,500 attend.

Obama is heading down to Los Angeles for the final leg of his West Cost tour on Monday afternoon, where he will attend a fundraiser in West Hollywood.

The president expects to raise up to $5.5 million during his visit to the tech hub, which has consistently been one of his largest sources of campaign cash.

This is the president's second visit to the Bay Area in six months, and his sixth visit since taking office. He's here to take advantage of the generous fundraising support he receives: Contributors from the area's three major cities coughed up $35.5 million for his 2008 campaign, and at least about $2.2 million for his re-election as of June 30.

Take a look at photos from some of his stops below:

PHOTO GALLERY
obama by the bay
Download
Calling all HuffPost superfans!
Sign up for membership to become a founding member and help shape HuffPost's next chapter
Join HuffPost 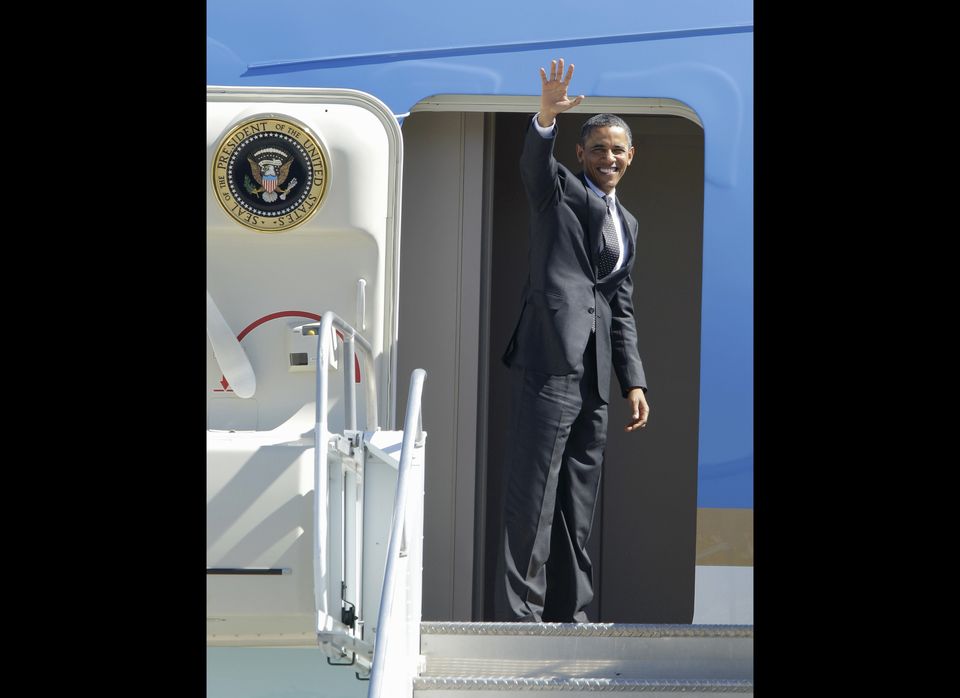