In the letter, which was published on the White House website, Obama wrote that "the accumulated toil and sacrifice of ordinary men and women" serve as the foundation of our nation, and the basis of the preservation of freedom.

Obama's letter is 272 words long -- the same length as the Gettysburg Address.

View a transcript and photo of the letter below:

In the evening, when Michelle and the girls have gone to bed, I sometimes walk down the hall to a room Abraham Lincoln used as his office. It contains an original copy of the Gettysburg Address, written in Lincoln's own hand.

I linger on these few words that have helped define our American experiment: "a new nation, conceived in liberty, and dedicated to the proposition that all men are created equal."

He understood as well that our humble efforts, our individual ambitions, are ultimately not what matter; rather, it is through the accumulated toil and sacrifice of ordinary men and women -- those like the soldiers who consecrated that battlefield -- that this country is built, and freedom preserved. This quintessentially self made man, fierce in his belief in honest work and the striving spirit at the heart of America, believed that it falls to each generation, collectively, to share in that toil and sacrifice.

Through cold war and world war, through industrial revolutions and technological transformations, through movements for civil rights and women's rights and workers rights and gay rights, we have. At times, social and economic change have strained our union. But Lincoln's words give us confidence that whatever trials avail us, this nation and the freedom we cherish can, and shall, prevail. 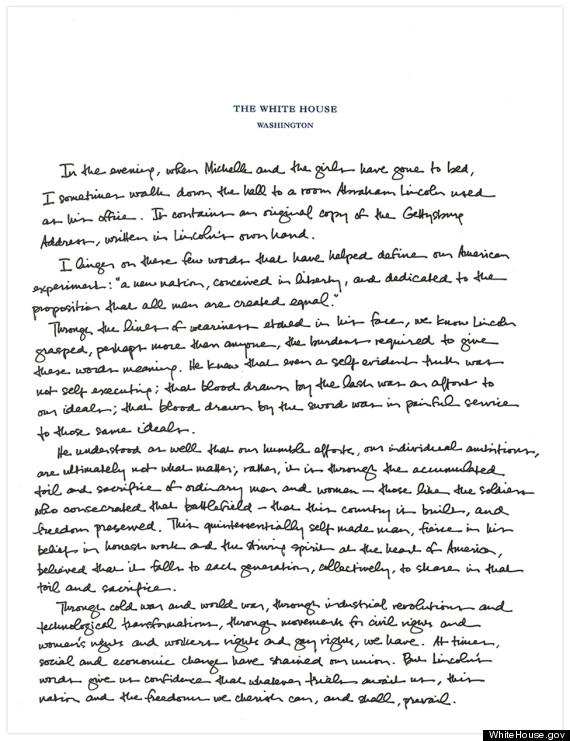