No matter what else he achieves or where he falls short, Barack Obama can lay claim to the title of King of Corporate Subsidies.

Using any of a variety of measures, the Obama administration has broken all records in the distribution of taxpayer dollars to American businesses, primarily banks, automobile manufacturers and insurance companies.

The tidal wave of dollar bills has stunned folks on all sides of the political spectrum.

David Arkush, director of Ralph Nader's Public Citizen's Congress Watch, told the Huffington Post, "In the form they have taken to date, the bailouts appear to be classic corporate welfare: As best we can tell, the government is giving astonishing amounts of money to private corporations and demanding far too little in return."

While conservative critics of traditional welfare payments to single mothers have bitterly complained about the flow of federal money to the "undeserving poor," the checks, loan guarantees and other subsidies flying out the door of the Treasury, Federal Reserve and Federal Deposit Insurance Corporation dwarf the Temporary Assistance for Needy Families (TANF) program -- a.k.a welfare for poor people -- which, by the standards of AIG and Citicorp, get chump change: $23.2 billion this year.

The administration is acutely aware of the political liabilities of its bailout policies. On April 14, in a speech at Georgetown University, Obama sought to provide a detailed defense of massive government expenditures to rescue failing American businesses. In that speech, the president addressed three of the most controversial issues in the bailout:

"The heart of this financial crisis is that too many banks and other financial institutions simply stopped lending money.... Now, I don't agree with some of the ways the TARP program was managed, but I do agree with the broader rationale that we must provide banks with the capital and the confidence necessary to start lending again. That is the purpose of the stress tests that will soon tell us how much additional capital will be needed to support lending at our largest banks. Ideally, these needs will be met by private investors. But where this is not possible, and banks require substantial additional resources from the government, we will hold accountable those responsible, force the necessary adjustments, provide the support to clean up their balance sheets, and assure the continuity of a strong, viable institution that can serve our people and our economy."

2. Why not let the overextended banks fail?

"[T]here are some who argue that the government should stand back and simply let these banks fail - especially since in many cases it was their bad decisions that helped create the crisis in the first place. But whether we like it or not, history has shown repeatedly that when nations do not take early and aggressive action to get credit flowing again, they have crises that last years and years instead of months and months -- years of low growth, years of low job creation, years of low investment, all of which cost these nations far more than a course of bold, upfront action."

3. Why not temporarily nationalize the banks?

"The reason we have not taken this step has nothing to do with any ideological or political judgment we've made about government involvement in banks. It's certainly not because of any concern we have for the management and shareholders whose actions helped to cause this mess. Rather, it's because we believe that preemptive government takeovers are likely to end up costing taxpayers even more in the end, and because it's more likely to undermine than create confidence. Governments should practice the same principle as doctors: First, do no harm."

The total amount of money going to prop up these banks, insurance firms and automobile companies vastly outstrips prior federal initiatives.

Estimates of current spending and liabilities run a broad gamut. ProPublica tracks only spending by the U.S. Treasury (not the Fed, FDIC, or other federal agencies), and arrives at a total figure of $1.1 trillion. CNBC calculates a much larger figure, $7.36 trillion, taking into account, a much broader "complicated cocktail of budgeted dollars, actual spending, guarantees, loans, swaps and other market mechanisms by the Federal Reserve, the Treasury and other offices of government." Bloomberg's tally is $12.8 trillion, leading the field with an accounting that covers every dollar "spent, lent or committed." Bloomberg.com put together the following table to show how it reached its conclusion (the total figure committed/spent/lent is at the top of the left column):

The following table details how the Fed and the government have committed the money on behalf of American taxpayers over the past 20 months, according to data compiled by Bloomberg. 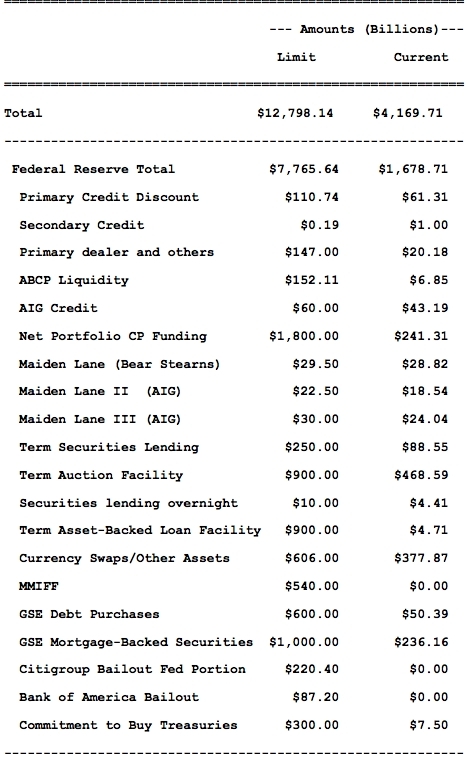 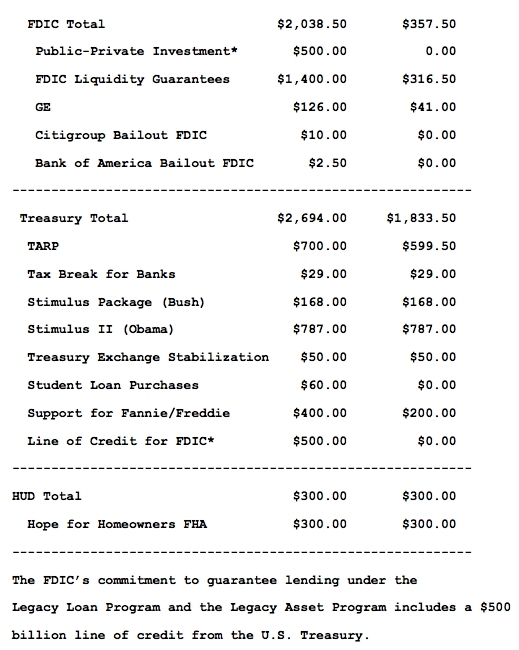 These huge sums have left journalists struggling to find ways to put them in perspective. To start with, a trillion is one thousand times one billion, which is 1, followed by 12 zeros, or 10 to the 12th power.

The administration's largess could, of course, pay off with a full-scale realignment to the Democratic Party of the nation's CEOs. Or perhaps the CEOs would like to go a step further and align with either the Socialist Party USA or the Democratic Socialists of America, where American business might feel most at home.