WASHINGTON (AP) -- Barack Obama performed an annual rite of presidents on Wednesday, pardoning a pair of turkeys on Thanksgiving eve and cracking jokes about the competition that brought them to his famous doorstep.

"For the record, let me say that it feels pretty good to stop at least one shellacking this November," Obama said in the White House Rose Garden, where he was flanked by daughters Malia and Sasha. A "shellacking" is how Obama described the beating Democrats suffered in elections earlier this month; the party lost control of the House and saw its Senate majority trimmed by six seats.

Apple and Cider, the two 45-pound turkeys who got a new lease on life, were selected from a group of 25 turkeys during a competition "that involved strutting their stuff before a panel of judges, with an eclectic mix of music playing in the background," Obama said.

He called it a "turkey version" of "Dancing with the Stars." The program crowned its newest winner Tuesday night.

"Except the stakes for the contestants was much higher," Obama said, laughing. "Only one pair would survive and win the big prize. Life."

The president wished America's families, including many buffeted by the economic slump, a safe and happy holiday. He also thanked the men and women of the U.S. military for serving "bravely and selflessly" in places far away from home.

Afterward, Apple and Cider were to be taken to the home of George Washington, the nation's first president, in nearby Mount Vernon, Va. For the past five years, the presidentially pardoned turkeys had been sent to Disneyland in California, which upset animal rights activists. 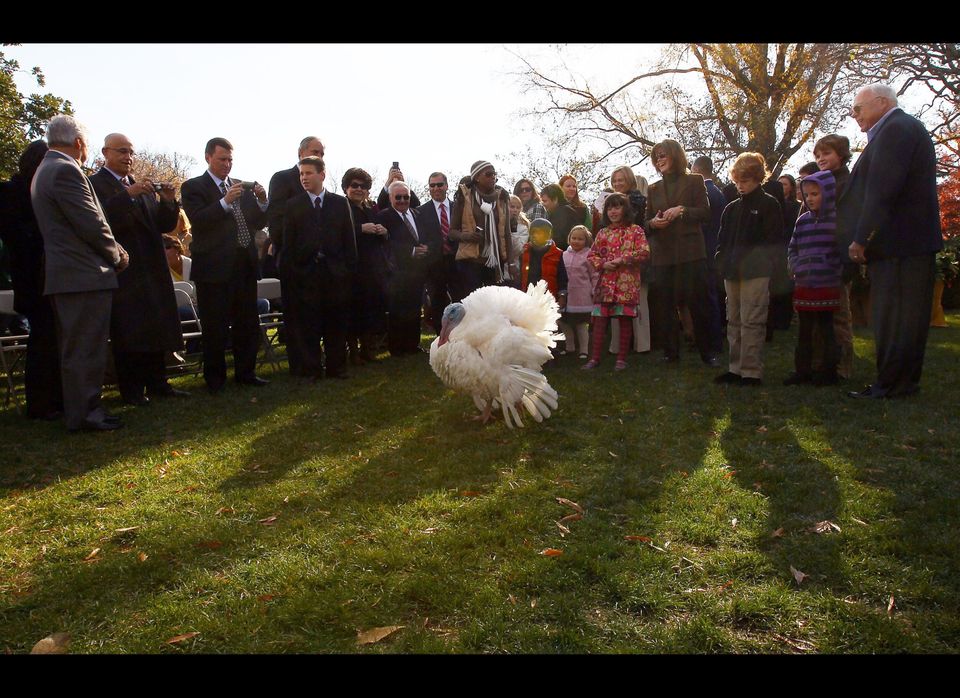 1 / 3
WASHINGTON - NOVEMBER 24: The National Thanksgiving Turkey, named Apple, participates in a ceremony where it was pardoned by U.S. President Barack Obama in the Rose Garden November 24, 2010 in Washington, DC. After the event, Apple will be taken to a new residence at George Washington's Mount Vernon Estate and Gardens. (Photo by Win McNamee/Getty Images)
Getty