WASHINGTON -- The 2012 election is shaping up as the election of big money power.

Super PACs, accepting unlimited contributions from billionaires, millionaires, and corporations, have become a serious topic of debate during the Republican primary season where billionaires have provided crucial support for Mitt Romney, Newt Gingrich and Rick Santorum."

But with the new system of unlimited money debuting this year, another fundraising development has been be overlooked: President Barack Obama's campaign is raising a higher percentage of its contributions from small donors than during the much-heralded small donor boom in the 2008 election.

According to an analysis by The Huffington Post, the Obama reelection campaign committee, Obama for America, pulled in at least 45 percent of its contributions from donors giving less than $200 during each of the fundraising quarters it was active in 2011.

In 2007-2008, there was only one quarter, from April through June 2008, during which the campaign pulled in more than 40 percent from these small donors. It never had a quarter or month where it raised 45 percent or more from small donors.

The Huffington Post's analysis examined contributions made directly to Obama for America and those transferred from the Obama Victory Fund, a fundraising vehicle that allows donors to give to both the presidential campaign committee and the Democratic National Committee's (DNC) campaign committee. The analysis did not cover the first quarter of 2011 or the years of 2009 or 2010 because the Obama reelection campaign launched in April 2011 and did little fundraising before then. 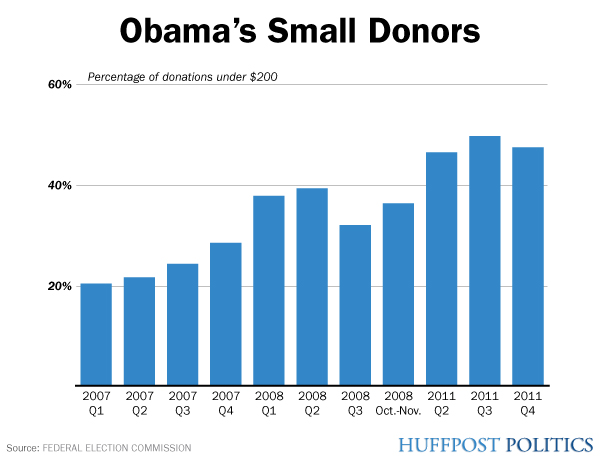 The influx of small donors is due in part to the 13 million-plus person supporter list built by the campaign in the 2008 election. This e-mail list has been used to pump small donations - as small as $3 at a time - from supporters using a variety of tactics including partisan appeals and contests to win time with the president. The common denominator of the appeals has been their personal nature.

Teddy Goff, the digital director for the Obama campaign, explained the key to small donor fundraising, which is largely done through the Internet. "The thing that helps us raise money is content that resonates with people that makes people feel connected to the campaign."

Goff told The Huffington Post the campaign team learned in 2007 and 2008 that donors giving $5 or $10 aren't looking for a transactional relationship. "These are people who feel emotionally invested in something bigger than themselves."

One of the campaign's most commented-on personal messages came with the subject line, "Hey." The message, which carried the president's name and signature, included a two-sentence request for small contributions before the end of the fundraising quarter, "About the deadline tonight: It matters. If you can, please give $3 or more today." The laid-back tone became the subject of mockery from political observers at the time, but it helped raise money.

The culmination of this effort has been the "Dinner with Barack" series of fundraising e-mails. Donors giving at least $3 were entered into an raffle to win a dinner with the president and the first lady. The winners were then cycled into the fundraising loop by sending a campaign e-mail telling other Obama supporters about their dinner and that they should enter the $3 donation contest.

Not all the solicitations came from personal appeals or contest announcements. Many also relied on the kind of partisan narratives that ordinarily drive small dollar donors. Recently, the campaign issued a fundraising appeal in response to a remark by Republican presidential candidate Mitt Romney after he won the Florida primary, "While we celebrate this victory, we must not forget what this election is really about: defeating Barack Obama." Romney turned his statement into a fundraising drive by calling on his supporters to help him reach a $1 million goal for his "One-Term Fund."

The Obama campaign issued a quick response calling on donors to give to a "Two-Term Fund."

Campaign manager Jim Messina wrote in an e-mail to supporters, "Last night Romney summed it up in one line -- for them, it's all about beating one man and sending his family packing from the White House. Everything else the Republicans say or do is just means to that end."

The Obama campaign raised $2.5 million within three days of its response to Romney's remarks and, as of Feb. 14, the "Two-Term Fund" had received donations from 66,079 people totaling $3.18 million.

The campaign stated when it hit the 1 million donor mark, that 98 percent of the donations received by the campaign came in increments of less than $250. This is somewhat misleading as it represents the amount given per donation, not per donor; some donors giving small amounts ultimately give more than $200 in the aggregate.

But if personal e-mails are the vehicles used to tap small donors, then the Obama Victory Fund is the key to reeling in the biggest checks. Donors can give up to $35,800 to the fund with $30,800 going to the DNC and $5,000 going to the Obama campaign. This has led to a big surge in donations above $10,000 to the DNC.

Comparing donations to both the president's campaign committee and the DNC in 2011 to 2008, however, is difficult. There was only one full quarter in 2008 where the president was raising money alongside the DNC. That quarter, July through September, coincided with the Democratic National Convention and boasted the biggest fundraising hauls for both the Obama campaign and the DNC. During this period, small donors accounted for 29 percent of all contributions to both committees combined.

The remaining crop of Republican primary candidates is a mixed bag when it comes to small dollar donors. The leading fundraiser, former Massachusetts Gov. Mitt Romney, raised 9 percent of his contributions from small donors in 2011. Texas Rep. Ron Paul raised the most from small donors, 52 percent, while former Speaker of the House Newt Gingrich pulled in 49 percent of his donations from people giving under $200.

Former Sen. Rick Santorum received about 30 percent of his contributions from small donors. Gingrich and Santorum have, however, seen their small donor numbers rise as both of their fundraising picked up in the months leading up to the Iowa caucus.