CHARLOTTE, N.C. -- There were no fireworks on Thursday night -- at least not of the literal variety. There were no Greek columns or open-air stadiums surrounded by majestic mountains. There were no calls for a new type of politics or for a turning of the page on the George W. Bush administration.

There was some glitz, some Hollywood stars and immaculate stagecraft. But the idea that a presidential candidate could himself become the embodiment of change was replaced with something less lofty but, perhaps, just as politically poignant. When President Barack Obama addressed the Democratic National Convention here at 10:25 p.m., both he and the crowd were animated by protectiveness for what's been accomplished so far in his presidency and hope to build on those achievements.

It was reflected not just in the tone of the week -- from a rousing and unexpected defense of the president's health care law on Tuesday night, to an invocation of the GOP-maligned clean energy subsidies, to a repeated reference to Vice President Joe Biden's favorite line "bin-Laden is dead and General Motors is alive" -- but in the arc of Obama's speech as well.

"I know what it means to send young Americans into battle, for I have held in my arms the mothers and fathers of those who didn’t return. I’ve shared the pain of families who’ve lost their homes, and the frustration of workers who’ve lost their jobs. If the critics are right that I’ve made all my decisions based on polls, then I must not be very good at reading them. And while I’m proud of what we’ve achieved together, I’m far more mindful of my own failings, knowing exactly what Lincoln meant when he said, 'I have been driven to my knees many times by the overwhelming conviction that I had no place else to go.'" "America," Obama offered at the conclusion of his speech, "I never said this journey would be easy, and I won't promise that now. Yes, our path is harder -- but it leads to a better place. Yes our road is longer -- but we travel it together. We don't turn back."

By the admission of the president's fans and critics, it has been a long four years since then-Sen. Obama addressed the convention crowd gathered at Mile High Stadium in Denver, Colo. And it has left the campaign with a difficult juggling act: how to tout an America that is progressing without offending those who feel left behind. The speakers leading up to the president attempted to help him thread that needle, repeatedly invoking the achievements that they didn't want undone while pledging to fulfill the "promise of America" that Obama laid out four years ago.

"Day after day, night after night, I sat beside him, as he made one gutsy decision after another -- to stop the slide and reverse it," said Vice President Joe Biden, in remarks that set the stage for the president's address. "I watched him stand up to intense pressure and stare down choices of enormous consequence. Most of all, I saw what drove him: His profound concern for the American people."

In one of the most rousing one-liners of the night, Sen. John Kerry (D-Mass.) reminded Americans of the president's top national security accomplishment while deftly skewering a top Republican talking point.

"Ask Osama bin Laden if he is better off now than he was four years ago," said the 2004 Democratic presidential nominee.

Obama himself didn't mention the economic stimulus he pushed early in office. But former President Bill Clinton made that defense the night before. On Thursday, meanwhile, veterans, auto workers, college students and gay rights advocates all appeared on stage to thank the president for what he's done. Former Michigan governor Jennifer Granholm credited Obama with making the "tough calls" that saved the American auto industry. Rep. Barney Frank (D-Mass.) was brought on stage to talk, in part, about the dangers of repealing financial regulatory reform, but he meandered hopelessly off-script and ended up lampooning Mitt Romney's record in Massachusetts instead.

At various points in his address, Obama reaffirmed his commitment to some of the principles that he campaigned so hard for in 2008, but came up short of addressing while in office. "Climate change is not a hoax," he pointedly declared at one point. At others, he gave sweeping declarations about his vision of the country as a collective unit. "[W]e also believe in something called citizenship -– a word at the very heart of our founding, at the very essence of our democracy; the idea that this country only works when we accept certain obligations to one another, and to future generations." he said. He repeatedly returned to the theme that now is not the time to undo the progress made.

"After all that we’ve been through, I don’t believe that rolling back regulations on Wall Street will help the small businesswoman expand, or the laid-off construction worker keep his home. We have been there, we’ve tried that, and we’re not going back," said Obama. "We are moving forward."

The comments concluded a three-day convention that was equal parts proudly unapologetic about the president's record and hostile to Mitt Romney's. There were mishaps: one self-inflicted (platform language over Jerusalem's status as the capital of Israel), the other a force of nature (concerns over thunderstorms forced the campaign to move the final night into the much more confined Time Warner Cable Arena). But by the count of most observers, including some Republicans, it was a bigger hit than the GOP conventions that preceded it.

The loyalty Obama continues to inspire among his supporters remains elusive for Romney. Both highly partisan affairs, the Republican National Convention nevertheless spent less time focusing on the record of its nominee. In contrast, the number of signs and T-shirts in Charlotte with Obama's visage, including one convention-goer's larger-than-life poster of nothing but Obama's face, dotted both the city and the convention floor. With that adoration comes a defensiveness of both the man and his policies.

"He's been knocked down one time after another, and his resilience is what has impressed me," said Johnnie Patton, a delegate from Jackson, Miss.

Whether political and personal resilience is enough to sell the country on a second term is unclear. But advisers to the president said they believe Obama's re-election hinges heavily on the country believing that progress, however, incremental, has been made under this watch. In that context, reminding voters what could be lost is a powerful motivator.

"Over the last four years, people have fought so hard for change in the toughest of circumstances," White House communications director Dan Pfeiffer told The Huffington Post. "The idea that the Republicans would make all of that blood, sweat and tears moot has a real impact on many people"

Sitting on the arena floor Thursday night, waiting for the president to speak, supporters offered personal testimonials echoing that sentiment. Peggy Whitworth of Cedar Rapids, Iowa, worked tirelessly for Obama in 2008 and was rewarded with a seat near House Minority Leader Nancy Pelosi during that year's convention. "It was a thrill beyond thrills," she said.

Four years later, the passion hasn't ebbed, but it's been channeled in different waves. Whitworth spends 20 to 30 hours a week making phone calls on behalf of the re-election campaign.

The campaign in 2008 "was the beginning of a relationship and now we are in a committed long term relationship," Whitworth said. "Some of the excitement and some of the heart fluttering, that's gone. But there is a deep, abiding connection."

As Stan Greenberg, the longtime Democratic pollster, described it: "They are coming together to affirm the scale of things they got done and they want to make sure he has the chance to do things that are aspirational for the country."

Obama, building upon the basic principles that animated him as a community organizer and helped him inspire millions during his meteoric rise through political office, urged the crowd on Thursday night to continue reaching for those aspirational goals.

"If you turn away now -- if you buy into the cynicism that the change we fought for isn't possible -- well, change will not happen," said Obama. "If you give up on the idea that your voice can make a difference, then other voices will fill the void: lobbyists and special interests; the people with the $10 million checks who are trying to buy this election and those who are making it harder for you to vote; Washington politicians who want to decide who you can marry, or control health care choices that women should be making for themselves. "Only you can make sure that doesn’t happen," he urged. "Only you have the power to move us forward." 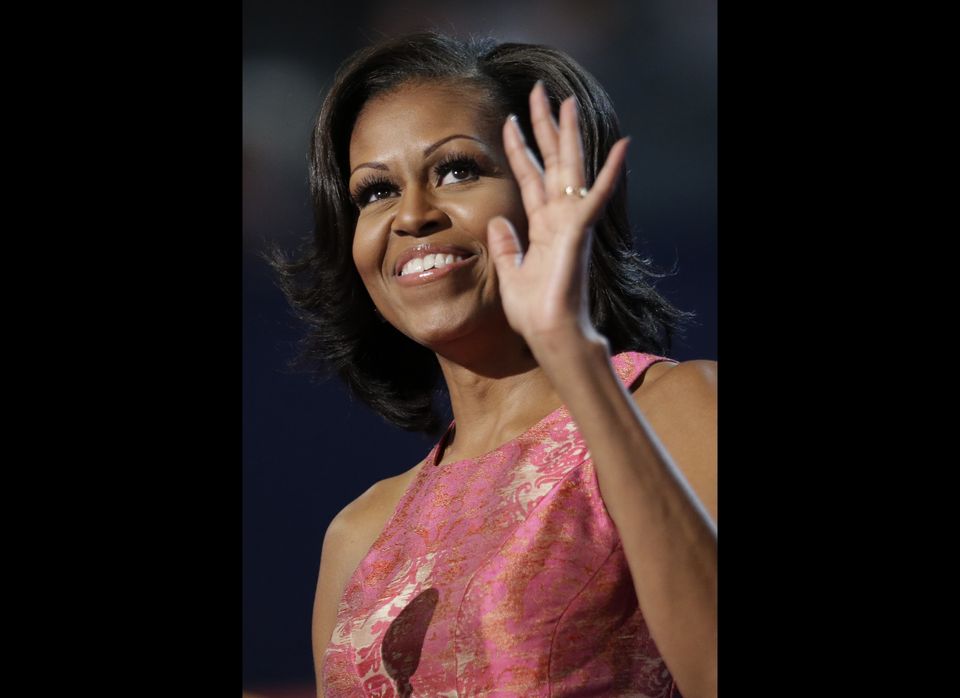