A lesbian teacher at a Catholic high school who was fired after telling her employer she is pregnant has found support from thousands of people, online and off.

Barb Webb, who has been with partner Kristin Lasecki for five years and worked at the all-girls Marian High School in Bloomfield Hills, Mich. for nine, taught honors chemistry and coached sports teams. She was fired in August. She told the Detroit Free Press she was not given a reason for her termination, but it came shortly after she notified the school she was pregnant, and she believes the public nature of her "nontraditional" pregnancy was the cause.

On Sunday, protesters stood outside Marian, carrying signs demonstrating for human rights and showing they "stand with Barb Webb."

One of Webb's supporters was Maureen Francis, who graduated from the school in 1983. She wrote Marian a letter informing them she would no longer be donating and didn't plan to send her daughter there. But she was still surprised when the 11-year-old asked to come with her to the protest. 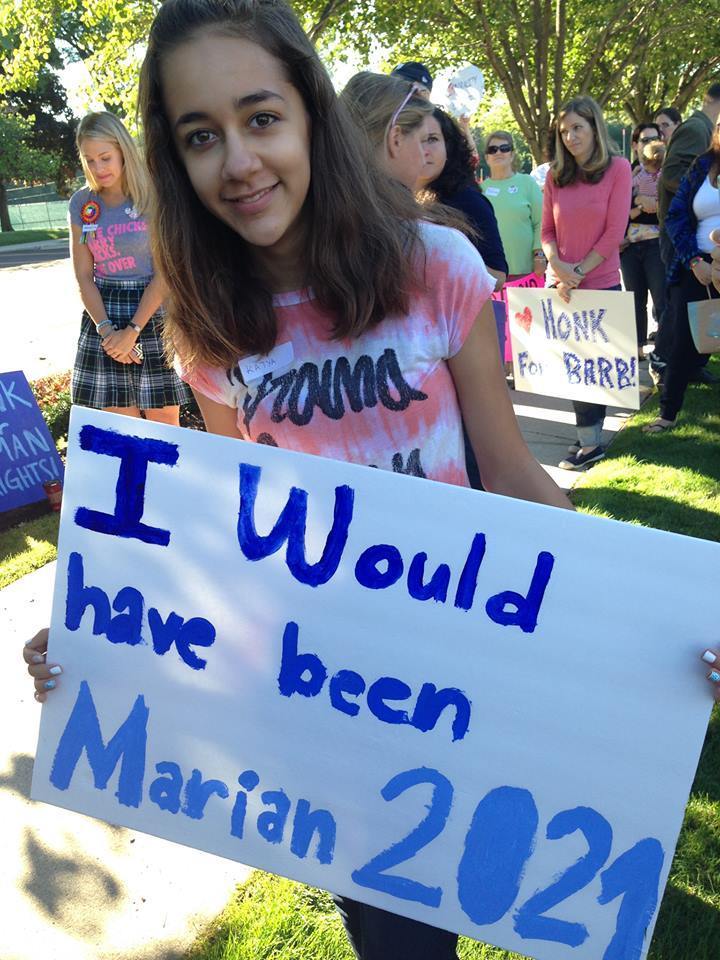 "She said, 'I want to go, are you kidding me? What they did was wrong,'" Francis told The Huffington Post. "I was so proud of her."

Alumnae like Francis, as well as current students, have led the charge to support Webb. A Facebook group was started by alumna Rachel Chapman Kopera; it has more than 3,000 members, and 700 people have signed a petition on Change.org. In a letter, alums stress that the decision to fire Webb conflicts with what they were taught as students and urge Marian to start a diversity club.

"I still wear my Marian High School ring (see my right hand) because I'm proud to be a part of a school that stands up for social justice and diversity," Kopera captioned a Facebook photo of herself holding a sign supporting Webb. "Let that be Marian's legacy." 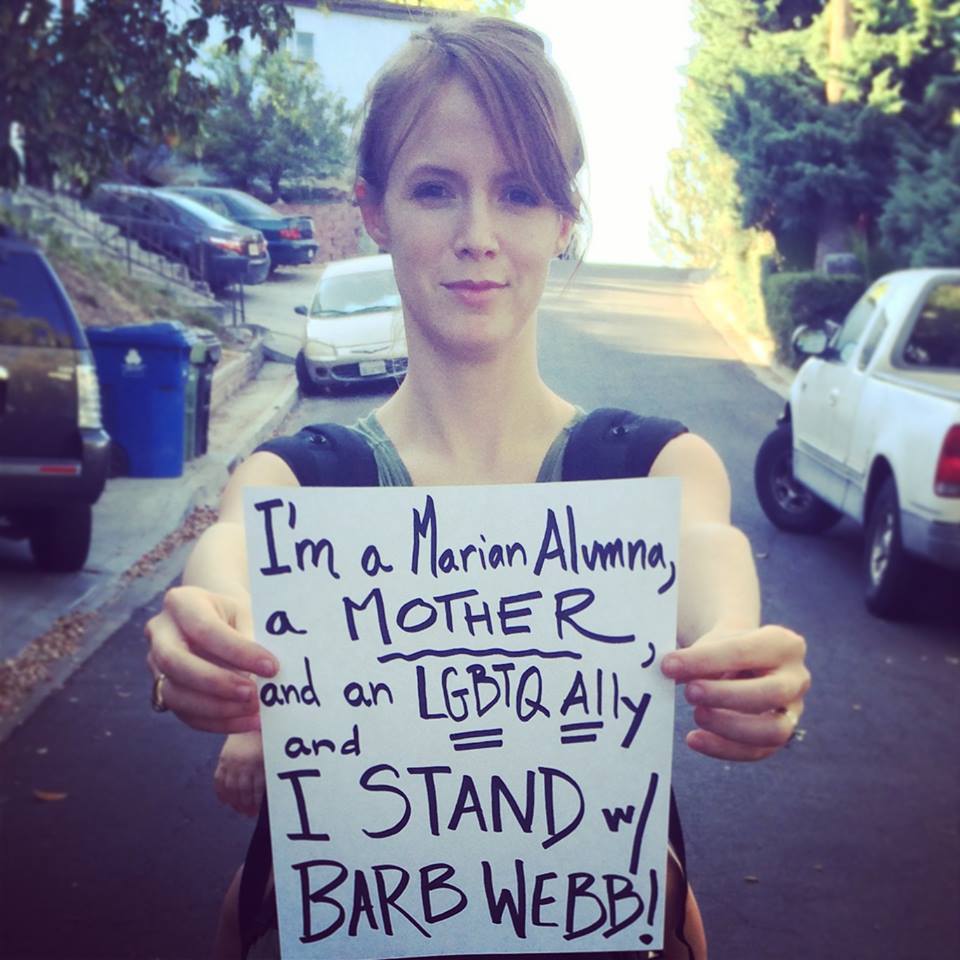 Marian has not publicly commented on Webb's termination.

According to the New Republic, the school has a morality clause that states teachers "will not publicly engage in actions, or endorse actions or beliefs contrary to the teachings and standards of the Roman Catholic faith and morality.” Concerns over Webb's adherence to the morality clause came up in previous conversations with the school, Webb told the Free Press.

Other Catholic schools have fired gay teachers who become pregnant. One woman won a $170,000 judgement against an Ohio archdiocese after filing a federal anti-discrimination lawsuit.

Michigan's Elliott-Larsen Civil Rights Act prohibits employers from discriminating based on "familial status," which includes pregnancy, though it does not include specific protections for LGBT individuals.

Fired Marian HS teacher Barb Webb and wife Kristen Lasecki at a rally in support of Webb this am pic.twitter.com/phMIMDuP2F

Webb was reportedly given the chance to resign with health benefits if she did not discuss the situation. In a Facebook post last week, she shared the news of her firing, saying she hoped it would be a catalyst for change.

It is part of Marian's mission to educate women about human diversity and in this have really missed out on a true life opportunity to set an example. Instead they are only perpetuating hate. Well I ask that those of you that are in a position to and feel a call to action in the face of injustice, stand up for change.

My job can't be saved but the torment that the poor LGBT students at Marian must be feeling (right let's be real they exist too) the other LGBT staff (again let's be real people) and those that are silenced by fear can be helped.

Speak out against hate wherever you see it. Whether it's writing a letter or calling Marian or setting a safe place in your own school or business. Don't be afraid to be the change that so many of us need you to be. It is only when the masses can stand up to injustice that we all may have a chance to fulfill our life dreams and ambitions.

Francis said the reaction from the community might spark change at Marian.

"If the school does something positive out of this [my daughter] may go there someday," she said.

Senior Shelter Dog 'Looks Forward' To Being Tucked In Every Night