Gay marriage has jumped out of the closet on to the front page. Everyone from the president of the U.S. to retired four star general Colin Powell is embracing the issue, now supported by most Americans. Still, a few people, like former First Lady Laura Bush appear to be conflicted. This week Mrs. Bush, who publicly supported gay marriage, now objects to appearing in an ad that carries her words of support. 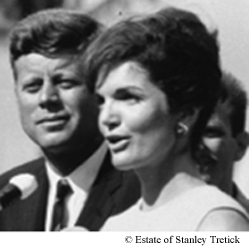 Presidents often disappoint, but first ladies rarely do. I became a student (and secret admirer) of first ladies after writing biographies of Jacqueline Kennedy Onassis (1978), Nancy Reagan (1991) and Barbara and Laura Bush (2004). Through years of research and reporting I've watched these unelected women enhance the presidencies of their spouses through deed and demeanor. They all seem to do it with style and grace and as a result they usually become even more popular than their beleaguered husbands (Lady Bird Johnson, Betty Ford and Michelle Obama).

These warrior goddesses stand stalwart in the face of their husbands' scandals (Pat Nixon and Watergate; Nancy Reagan and Iran Contra; Hillary Clinton and Monica Lewinsky). They protect their young (Jacqueline Kennedy); they beautify their environment (Lady Bird Johnson) and they do good for others, even after leaving the White House. (The Betty Ford Clinic provides treatment for alcoholism; the Barbara Bush Foundation raises money for literacy; Rosalynn Carter travels the world for the Carter Center to promote mental health, and at the age of 91 Nancy Reagan still campaigns for expanded stem cell research.)

As first ladies these women stay above the political fray, avoid divisive muck, and glide like swans across ponds of public good will. Most write commercially successful memoirs of their days in the White House, where they became beatified, and as the wives of former presidents they continue burnishing their husbands' legacies as well as their own. 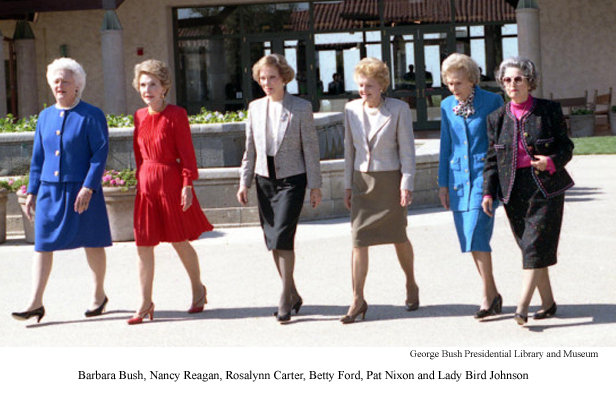 For the most part first ladies seldom falter, which is why it was disappointing to read about the wife of a self-described "compassionate conservative" former president fumble on an issue of equal rights.

A group known as Respect for Marriage Coalition had launched a $1 million multi-media campaign last week that featured President Obama, former Vice President Dick Cheney, former Secretary of State Colin Powell and Mrs. Bush in their own words expressing support for the marriage rights of all committed couples. The group had taken what Laura Bush had said on the subject to Larry King on television: "When couples are committed to each other and love each other, then they ought to have, I think, the same sort of rights that everyone has."

The former first lady's words had reassured many who recalled with dismay her husband's hard line on homosexuality. As Governor of Texas, George W. Bush said he supported the state's law against sodomy "as a symbolic gesture of traditional values." He opposed hate crimes legislation that would have protected gays. He also opposed gay adoption and gay marriage, and as president he proposed a constitutional amendment prohibiting same-sex unions. 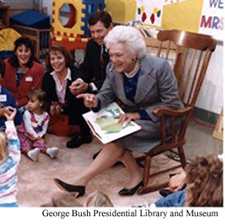 Granted, Laura Bush did not oppose her husband until after he had left the White House and would not have to pay the consequence of her words, but that seems to be in the tradition of Bush wives. Barbara Bush also waited until her husband, an ardent foe of abortion for 12 years, was no longer president before she declared publicly that abortion should be a "personal choice" and that she was pro-choice.

A year after Laura Bush's 2010 interview on CNN, her daughter, Barbara Bush, taped a video for the Human Rights Campaign, now a sponsor of the Marriage Coalition. To date the former first lady's daughter has not withdrawn her support for gay rights, but when Mrs. Bush saw her support in the Coalition's television ad last week she immediately directed her spokeswoman to contact the media to say that the former first lady "did not approve of her inclusion in this advertisement nor is she associated with the group that made the ad in any way."

The Coalition, comprised of 80 civil rights, family, health, labor, business, student, LGBT and women's organizations, withdrew the ad in deference to Mrs. Bush and issued a statement, explaining they had used public comments from American leaders of both political parties who had expressed their support for civil marriage. "We appreciate Mrs. Bush's previous comments but are sorry she didn't want to be included in an ad."

One can only wonder why the former first lady chose to backtrack on an issue that is supported by most Americans, who believe that marrying the person you love is a fundamental freedom and Constitutional right for everyone, including gays and lesbians. Polls show that a majority of the country believes that continuing to deny gays and lesbians the freedom to marry constitutes discrimination, and those who personally oppose marriage equality accept that it is likely to become a reality within the next decade. Even Congress has jumped on board. Bills were introduced in the Senate and the House this month to change the definition of "spouse" in the U.S. Code so that same-sex married service members can get equal benefits. 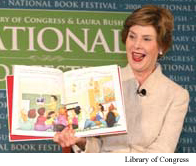 Surely Laura Bush, a former librarian, who as First Lady frequently posed for photographs reading to children, knows the folk tale of Chicken Little, who believes the sky is falling when an acorn drops on her head. Terrified, she decides she must tell the King and on her journey to the castle she meets a goose, a hen and a turkey -- Goosey Lucy, Henny Penny and Turkey Lurkey. Within moments they are cornered by a fox -- Foxy Loxy -- who threatens to eat them. In the happily-ever-after version only Goosey Lucy escapes. The morale, we are told, is not to be a chicken but to have the courage to stand up -- a quality found in most first ladies.