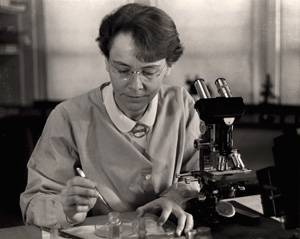 In his 2009 book, Wetware: A Computer in Every Living Cell, neurobiologist and bacterial behavior researcher Dennis Bray names Barbara McClintock the first biologist to ask, "What does a cell know about itself?" What lay behind this question, a question that may astonish some to come from the first woman to receive a solo Nobel Prize in Medicine or Physiology?

In fact, dispersed mobile genetic elements account for between 40 and 65 percent of our own DNA. They exceed protein-coding sequences by more than 25:1 (Lander, Linton et al. 2001; de Koning, Gu et al. 2011). We now recognize that many classes of mobile genetic elements can move from one place in the genome to a new location (Shapiro 1983; Craig 2002; Shapiro 2011). An earlier blog explained how these mobile elements played key roles in evolutionary innovation.

But McClintock was also the first person to document genome repair by living cells. That discovery lies behind Dennis Bray's striking reference. Yet this fundamental discovery does not appear in the introduction to the Wikipedia biography highlighting her major achievements. Let us correct the omission and review this part of McClintock's more than 70-year scientific career. I'd like to focus on the lessons she drew from her observations on genome repair.

"X-ray mutagenesis" was discovered in the 1920s by Herman J. Muller (Muller, 1927). X-rays were the first of many external agents that induce mutations, and thus hereditary changes, in living organisms. It is not very well known that these X-rays triggered cell repair functions and sophisticated chromosome rearrangements, not simple "gene mutations."

McClintock set out in 1931 to analyze the X-ray mutants Louis Stadler had isolated from maize plants at the University of Missouri. She was the right person to do this. As a Cornell graduate student in the 1920s, she personally developed the microscopic methods that allow scientists to visualize the 10 maize chromosomes.

Some X-ray mutants were unstable and "variegated" in their inherited properties. We can see similar variegating instabilities in spotted or striped kernels on ears of Indian corn. Based on her understanding of chromosome behavior, McClintock was able to explain the "variegating" mutants.

She proposed that variegating plants carried ring chromosomes. These rings were formed by the fusion of two broken ends of a previously linear chromosome. Such ring chromosomes would sometimes get lost during cell divisions as the plant grew, thus producing the variegated patterns.

Although colleagues scoffed at McClintock's idea, she went on to identify the predicted ring chromosomes in the variegating mutants (McClintock 1932). Other mutants induced by X-ray treatment also carried chromosome rearrangements. Sections of chromosomes were deleted, translocated, inverted, and duplicated.

All of these could be explained as the result of breaking one or more chromosomes at two sites, then rejoining of the broken ends to build brand new chromosome structures. These were quite different from the "gene mutations" imagined by Muller and his colleagues. McClintock had started down a novel path of thinking.

McClintock realized that the X-rays broke chromosomes wherever they happened to strike. Breakage alone, however, was insufficient to generate a mutant chromosome. Broken chromosomes would get lost. The cell's ability to repair the damage by fusing broken ends was essential. In other words, X-ray mutagenesis provoked cell action. This was not simply a passive consequence of physical damage induced by radiation.

This realization had profound implications. As McClintock wrote in her Nobel lecture:

The conclusion seems inescapable that cells are able to sense the presence in their nuclei of ruptured ends of chromosomes and then to activate a mechanism that will bring together and then unite these ends, one with another ... The ability of a cell to sense these broken ends, to direct them toward each other, and then to unite them so that the union of the two DNA strands is correctly oriented, is a particularly revealing example of the sensitivity of cells to all that is going on within them. [McClintock 1984]

Broken chromosome repair was thus an example of action by what McClintock came to call "smart cells." Dennis Bray's comment may well have been inspired by the following quote where McClintock generalized from her experience:

There must be numerous homeostatic adjustments required of cells. The sensing devices and the signals that initiate these adjustments are beyond our present ability to fathom. A goal for the future would be to determine the extent of knowledge the cell has of itself and how it utilizes this knowledge in a "thoughtful" manner when challenged. [McClintock 1984]

In raising the idea of cells operating in a "thoughtful manner," McClintock was trying to point biological research in a revolutionary new direction. We will return to her views on the future of biology at another time.

Let me simply note that 1) it is always wise to pay close attention to the thoughts of scientists as far-seeing as Barbara McClintock proved to be, multiple times in her unprecedented career, and 2) molecular technology is leading to an upheaval in biological thinking that will ultimately carry us to the place McClintock found over seven decades ago.

Professor of Microbiology at the University of Chicago