I wasn't expecting to be in the audience when ABC News gathered to dedicate its building to Barbara Walters on Monday. I hadn't found out I would be going until just a few hours before. But when I got there, there were five chairs in the front row of the "stage" area and one was reserved for me. I sat down and stared at the empty podium where Walters would soon receive her dedication.

I wasn't expecting to talk to her that day either. If I had left after the ceremony along with most people, I definitely wouldn't have gotten to. But I chose to stick around with just a few others, and nabbed an interview with one of my inspirations.

And I also wasn't expecting the ceremony to feel like it was so much about me -- or, rather, people like me: young, female journalists who are at the very start of their career.

I sat quietly and stared around the room at the familiar faces from ABC News around me. I stared up at the wall behind the empty podium. It was lined with photographs of Walters and some of her most iconic interviews, including every president and first lady since President Nixon. Wow, I thought. What a life! 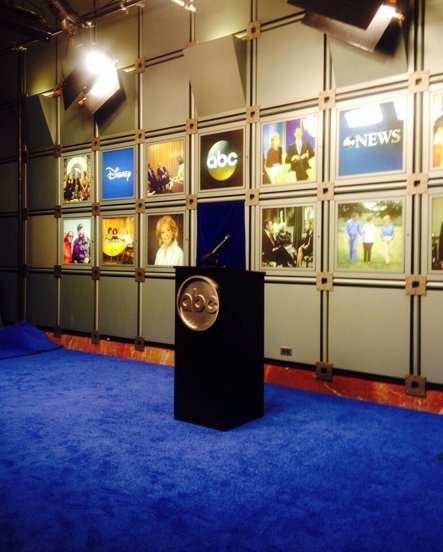 The empty stage just minutes before the dedication ceremony began.

The soft chatter that filled the room suddenly went silent and the sound of applause swept through as Walters made her way down the escalator and into the lobby.

As she spoke, Walters took a moment or two to thank her colleagues and staffers at ABC News, addressing her utmost feeling of honor. But as she stood there in front of pictures of her interviews with President Barack Obama, dictators and figures from pop culture, she made it clear that her honor was not due to the building or the plaque she stood in front of with her name on it.

Her sense of achievement wasn't about the faces on the wall at all.

"People ask me very often, 'what is your legacy,' and it's not the interviews with presidents, nor heads of state, nor celebrities, nor even the Sterlings," she said. "If I have a legacy -- and I've said this before and I mean it so sincerely -- I hope that I played a small role in paving the way for so many of you fabulous women who are here tonight."

I looked over at Robin Roberts, Diane Sawyer and Lara Spencer.

"I can't tell you how much pleasure it gives me when some smaller, young woman comes up to me and tells me of her achievements," Walters paused. "That's my legacy." 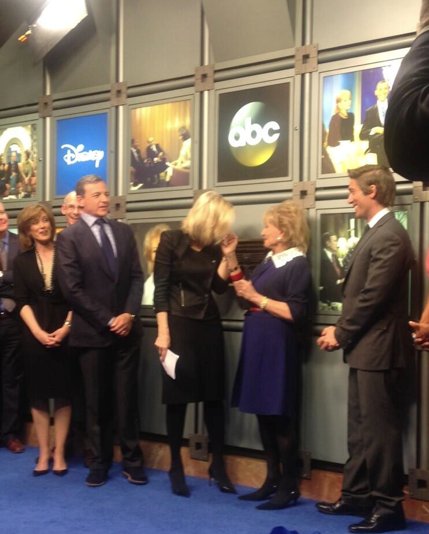 After the dedication, Diane Sawyer kisses Barbara Walter's hand and they share a tearful embrace.

But some fifteen minutes later, I suppose I was that "smaller, young woman" approaching Walters for an interview and telling her what an inspiration she has been. She was tired of standing, I could tell, so we sat down facing toward one another and I introduced myself.

I had not expected to be there that day so I had nothing prepared. There I was, sitting with one of the most famous interviewers of all time, and I was interview-less. I felt pretty certain, in that moment, that I had failed.

But the exchange that resulted was nothing I could have prepared for with notes. It was nothing that I would have wanted to replace with generic questions about her retirement anyway.

I told her that I was a media editor at the Huffington Post. She told me that she likes to think women like me are "her legacy." I quickly put together some questions in my mind about the ceremony -- how she felt and what the days ahead of retirement were like.

But then she turned to glance at the wall with all the pictures of her and the former presidents. Suddenly, I felt like Walters wasn't really thinking about the ceremony at all.

All the achievement, all the success, all the praise -- and in that moment her mind still wandered back to one day, decades ago, before any of it began. To a time when she too believed she had failed.

"You know, I've interviewed every living president -- every president since president Nixon," she told me. "But I want to tell you something. When I first started at ABC News, I was a failure. And then one day, I got a telegram from John Wayne -- and do you know what it said? It said 'don't let the bastards get you down.' And that changed everything. So when I look back, that is what I remember."

Barbara Walters had a building named after her, but that's not her legacy. Barbara Walters interviewed every president since Nixon, but it's the smaller moments she remembers most. And it's this small moment on this unexpected day in May that I probably will too.