Fame is a powerful commodity, yet how many celebrities parlay this fame into something that will make a real difference in the world? And beyond that, how many actually go beyond writing a check or lending their endorsement to actually turning their commitment into full-time work?

Shane and Sia Barbi, the blonde bombshell models known as the Barbi Twins, jokingly refer to themselves as "famous for nothing." Although they are certainly known to millions who bought their calendars, posters, and bestselling Playboy issues in the 1990s (among the dorm rooms their posters graced was that of Prince William), there are equally as many in the animal rights world who only know of the Barbis for their current animal activist work -- defying not only Fitzgerald's "no second acts" rule about American lives but seriously stretching what Shane and Sia call their respective "7.5 minutes" of fame allotment.

These identical twins, vegans and dedicated animal activists since the late '80s, have not merely used their fame to endorse awareness but have rolled up their sleeves, put feet to the ground, and now work 24/7 to promote meaningful action for "those who have no voice." This is not mere lip service: They are passionate, knowledgeable, and take no prisoners when it comes to animal rights -- about as far from Kardashian-variety fame as you can get. 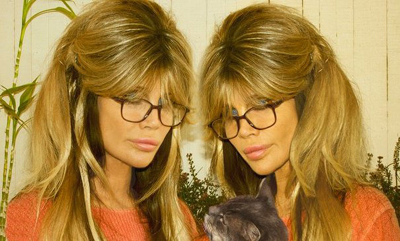 Before I spoke with Shane and Sia, I had taken note of their previous encounters with broadcast and online media, where descriptives like "elusive" and "enigmatic" were often used. As it turns out, the reality is quite the opposite. In true twin form, they complete each other's sentences and are sometimes impossible to distinguish -- Shane says her husband, actor Ken Wahl, calls their communication style "Barbinese." But the real surprise is that they are down to earth and witty, projecting a mutually self-deprecating humor while making some very hard-hitting points about how our society must seriously reform attitudes and practices toward animals.

Their ardent love for animals goes back to childhood. Growing up on a ranch, they befriended and gave names to all of the farm animals and describe their dismay when Jerry, Sara, or Tom found their way to their dinner plates, leading to their first act of activism: writing their own heartfelt manifesto, "Civil Rights for Animals." ("Our father thought we were nuts," says Shane.) They tie their decision to become vegetarians, and eventually strict vegans, back to their childhood ethos. "The older I became the more I related to how I felt as a kid," says Sia, adding, "If slaughterhouses were made of glass, everyone would be vegetarian or vegan." (Their 2010 book, The Eco Anti-Diet, promotes a raw vegan diet; all proceeds from its sale go to animal charities.) 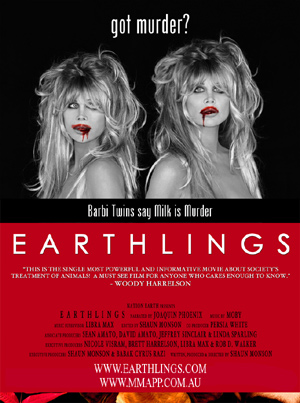 Shane and Sia Barbi's activism covers the animal rights map, from appearances and production stints in movies (such as Your Mommy Kills Animals, Skin Trade, and an upcoming feature-length "dogumentary" on breed discrimination called I Have a Dream, inspired by the case of Lennox) to protests and lobbying for such legislation as the Animal Crush Video Prohibition Act, but I was interested in what they consider top animal issues that are currently under-reported.

They begin by expressing frustration that Americans tend to get very fired up by animal cruelty issues in other countries, such as Japan or Korea, yet seem blind to the treatment of animals in our own country. In particular, they cite the treatment of horses, such as wild horses who are rounded up by business ranchers under government subsidized funding and sent to slaughter in Mexico or Canada, and even the U.S., now that President Obama has lifted the ban on horse slaughter in this country. "This is America's dirty little secret," says Sia, "80 percent of Americans don't want to eat horses ... plus horses helped build this country, yet we've allowed the business ranchers to team up with the Bureau of Land Management to profit off their eradication." The Barbis credit the Animal Welfare Institute (AWI) as being the main organizational heroes in the fight against horse slaughter.

And it's not only wild horses. "Many of the horses sent off to slaughter are healthy, former racehorses, and they are inhumanely packed into trailers and sent off to the cruelest death," says Shane. They say that horse slaughter is a particularly gruesome process, involving drills to the head, which take multiple attempts since their brains are so small.

Another issue that the Barbis believe most Americans turn a blind eye to is the plight of shelter animals. Shane and Sia say that a high percentage of animals taken into shelters are killed, and yet many Americans have simply gotten used to the status quo that "killing is saving." Staunch advocates of the no-kill shelter movement as well as Trap, Neuter, Release (TNR) programs for feral cats, they say spray and neuter programs cost far less than killing unwanted pets. Instead of the current high-kill shelters, which they claim are operated mostly by unionized government employees who often have little interest in the animals' welfare, they describe a viable business model for a no-kill shelter system, whereby veterinary students care for and spay/neuter shelter animals. Furthermore, they believe that increasing availability for adoptions from shelters is the way to eradicate puppy mills. By removing demand for their "product," the puppy mills will lose their profit motive and eventually cease to exist.

Shane says that if average people knew exactly how animals at shelters die, not to mention how unlikely these animals are to find adoptive homes, they would neither be so quick to abandon their pets like "an out-of-style designer purse." They do both believe, though, that a ray of hope for shelter animals comes from the advent of social media. Death row animals are now routinely publicized across Facebook and Twitter, and seeing the very real faces of these animals makes the idea of adoption tangible to those who might otherwise make a trip to the mall for a puppy or kitten. In fact, one of their own many rescues was spurred by a social media post: They learned of a blind Siamese cat who had been re-surrendered to a shelter after adoption and who was one hour from euthanization. "We got in the car and broke every speed limit," relates Shane. When they arrived in the nick of time, "She was scared and shaking, and when I picked her up, she just hugged for dear life... she knew she'd been saved."

Speaking of cats, no article on the Barbi Twins would be complete without mentioning Luka Magnotta. What's the connection? Well, long before he allegedly killed and dismembered student Lin Jun on video this year, Magnotta was on Sia Barbi's radar. Somebody had been posting videos of kitten torture online beginning in 2010, and Sia was determined to find and bring this person to justice. "My sister was crying every night over this," relates Shane. When a talented group of young people on Facebook, spearheaded by former military man Ryan Boyle, allegedly IDed the "kitten vacuum killer" as aspiring porn actor Luka Magnotta, Sia, along with animal activist groups Rescue Ink and Last Chance for Animals, mobilized in an attempt to get the FBI and Canadian police to take action. (Sia even recruited former porn star Ron Jeremy into a plan to lure Magnotta to the U.S. with a promise of a film role, though she says Jeremy got cold feet when she warned him that such an individual was highly likely to progress to violence against humans.) Shane and Sia say that a case such as Magnotta's underlines the importance of taking animal abusers seriously, and of having a central registry, just as there is for sex offenders.

What advice do Shane and Sia have for regular people who want to help animals without making a Barbi-esque time commitment? Support small grassroots animal groups that you've researched (instead of blindly giving to the big groups), go vegan for a meal or a day, help local shelters by donating supplies or offering to walk animals, or even hiring a walker to cut down on cage stress, and be active in calling legislators about issues like horse slaughter. Getting personally involved even in small ways can make a huge difference in the lives of animals.