Barcelona started its La Liga title defense in stunning fashion as it recorded a 7-0 win over Levante.

The Catalan side took less than three minutes to open the scoring through Alexis Sanchez and before half an hour had been played Lionel Messi, Dani Alves and Pedro were all on the scoresheet too.

By halftime Messi had bagged a double from the penalty spot and Xavi had struck, too. Barca eased off in the second period, with Pedro completing the scoring midway through the period.

Manager Gerardo Martino's first competitive Barcelona team selection included no new signings, as Neymar started on the bench, but Adriano was preferred to Jordi Alba at left back and Sanchez featured on the right flank.

It took the hosts just three minutes to carve open their visitors' backline. Pedro slipped a clever reverse pass into the area for Cesc Fabregas, who in turn squared to Sanchez for the easiest of finishes from close range.

Barcelona was in complete control and extended the lead in the 12th minute. Fabregas diverted a long ball into Messi's path with his chest, allowing the Argentine to play Pedro into the area before tapping in the wideman's low cross from the left.

Levante could hardly register a touch and found itself 3-0 down before the 30-minute mark. After robbing possession from David Navarro, Messi slid a pass into the area for Fabregas and despite Costa Rican goalkeeper Keilor Navas' best attempts to cut out his squared pass, Alves was on hand to stroke into an empty goal.

Pedro added his name to the scoresheet a few moments later as he latched on to Adriano's scooped pass before caressing a shot into the bottom-far corner after coming in from the left.

Barcelona added two more just before the break as Messi buried a penalty after Pedro Lopez's clumsy tackle on Adriano, and then Xavi poked the ball through Navas' legs after Messi's lobbed pass.

Martino's men started the second half in a more relaxed fashion, but that did not stop them from creating chances, as Messi almost beat Navas to a chipped pass and Gerard Pique had two attempts within close proximity of the goal area.

With just more than an hour on the clock, the moment that Barcelona fans had been waiting for arrived as offseason acquisition Neymar came off the bench to replace Sanchez, and the Brazilian was celebrating with his teammates 10 minutes later as Pedro dispatched a loose ball after Navas challenged Fabregas near the penalty spot.

The final period of the match resembled something similar to a training exercise for Barcelona. Neymar went close following a smart off-the-ball run into the area, but the championship side slowed the pace of the game and coasted over the line to collect the three points in a comfortable manner. 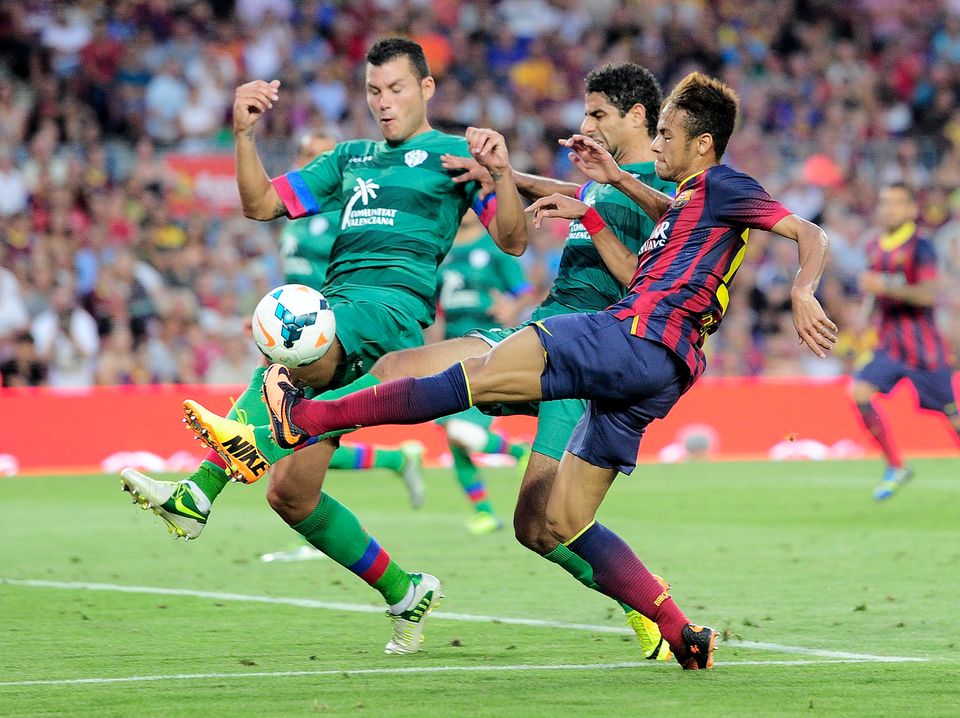