San Francisco Opera's revival of designer Jun Kaneko's The Magic Flute is simply the best show in town. Now through November 20, it's all about Art - what can be done with a square and compass, digital technology, a magnificent company of musicians, and Mozart. With an English libretto by General Director David Gockley, the translation tweaks the imagination, flatters the singer, and makes the Totally Other totally available.

Tuesday's opening night performance came with a huge surprise from the gods. As the house lights dimmed, Mr. Gockley stepped out to say that lightning had just struck - twice! Two of the cast members had taken ill. As "The Queen of the Night", soprano Albina Shagimuratova (from the 2012 premiere) would be replaced by Kathryn Bowden and that first-year Adler Fellow Julie Adams would replace Jacqueline Piccolino as "The First Lady". The air was charged. Last week, I spoke with baritone EfraÍn SolÍs who learned at the end of August that he would be on for the entire run as "Papageno". 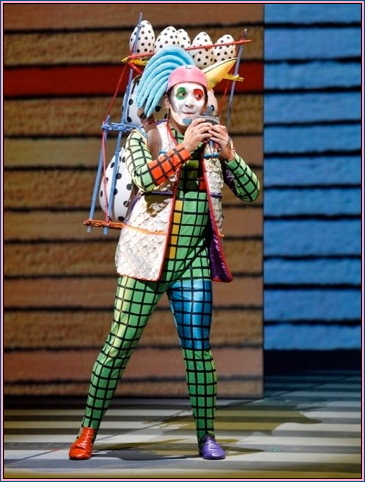 "I'd never learned the role completely," said Efraín, "but I did learn the arias in German. I actually didn't start using Papageno for auditions until this spring. I do sing a lot of Mozart. I've done Don Giovanni, Guglielmo, and covered Figaro last summer. I love Mozart. It's very important for young singers. I can feel how my voice is changing, how I'm adjusting certain things. At my auditions, I always knew that if I started with Mozart I could sing anything else after that. If you're in New York? And you're trying to warm-up on the train and you're late? If I walked in and suggested that I'd like to start with the Mozart - I know it would put me in a good place. I sang a lot of Aprite un po'quegli occhi [Le Nozze di Figaro] and Fin ch'han dal vino [Don Giovanni]. This year I started putting on Papageno, really thinking about the character. His second act aria is very frantic."

Last season at SF Opera, Efraín took on the role of "Dandini" in the Jean-Pierre Ponnelle production of Donizetti's La Cenerentola. In his Act I aria, Come un'ape ne' giorni d'aprile, Efraín was absolutely riveting as he delivered the rapid-fire text and crisp fioritura. When it was announced that he would replace Philippe Sly as Papageno, the energy of his comic interpretation and vocal agility popped immediately into view.

"Rossini's Cinderella is not done as often as people might think. Dandini and Papageno have a lot of similarity. You have to search within yourself and be true to the characters - because they are so honest, so open. They're not putting on anything. That's why it's so funny seeing a character like Dandini putting on a show and then, in the second half of hia aria, giving you a completely different side of who he is. He talks to the audience, 'Let's go on a fun ride and see how this ends!'" 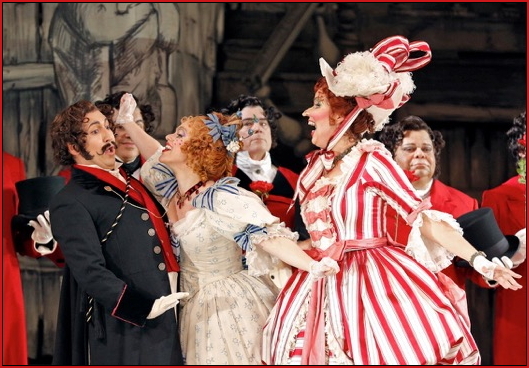 "Comedy is really all about timing. One of my favorite dialogues is in the beginning with Tamino. I never expected to hear 'Drag Queen' in The Magic Flute. The Queen of the Night is compared to something out of a drag show - which is not far off in San Francisco. What's different between the two composers is that Rossini makes the switches very clear to the audience. Mozart takes a little more time. All of Papageno's arias are to the audience. You go from little tidbits out to the house to now having three or four minutes to present another side of you - and still hold everyone's attention. Especially with songs that have repetitive verses, you have to find the differences - not just in the words and music - but in the character and what makes him sing the next verse. What turns him on? What makes verse one different from verse three? How does one verse lead to the other until you finally get to the point of what he's trying to say?" 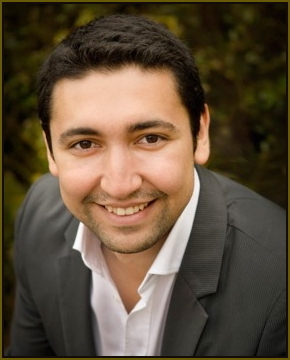 EFRAÍN SOLÍS. Courtesy of the artist

Efraín is from Santa Ana, California, which he describes as a small town and one in which a lot of his friends have preferred to stay. As a high school freshman he caught the opera bug from an upper classmate and was encouraged by a couple of astute teachers to get out of his comfort zone and explore.

"I had really good professors who supported what I did. My music teacher really went above and beyond. She would call up Opera Pacific every year to make sure we had tickets to their final dress rehearsals. She would take us to the Orange County Performing Arts Center [now the Segerstrom Center for the Arts] to see a play or musical. My English teacher would also take us out of school to see Shakespeare at the playhouse down in Orange County. The musical in my senior year was Les Miz. My AP English Lit teacher gave me a copy of Victor Hugo's Les Misérables and then gave me the SparkNotes. She said to read the novel when I had time, but to go through the SparkNotes to find a character."

The stage director for Magic Flute, Harry Silverstein, is acclaimed for his command and finesse with the Mozart repertoire. His work at San Francisco Opera goes back to the 1989 summer presentation of Satyagraha by Philip Glass and, most recently, Rigoletto and La Bohème. Given the complex movement patterns of various sized screen panels upon which Kaneko's magnanimous digital artwork is projected - along with his whimsical/supernatural creations (especially, the "Chinese-influenced" two-headed dragon and the mystical episodes within Sarastro's Temple of Wisdom) - Silverstein holds onto the straightforwardness of the characters and the true simplicity of Mozart's elegant "vaudeville". 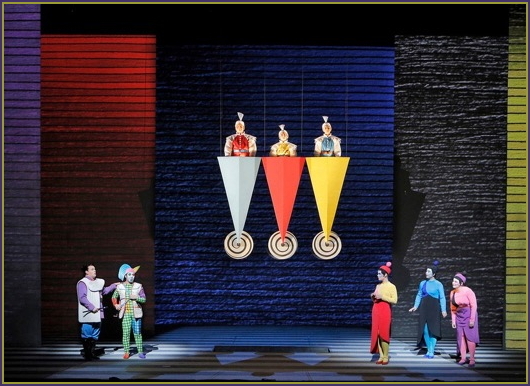 "Harry was really wonderful. He took me aside the first week after one of the rehearsals and said, 'I know a lot of people have ideas about what Papageno should be since it's a role that everyone knows. Don't play Papageno like you've been singing it for twenty years! You are Papageno's age. You have to find Papageno in you and be true to that. In twenty years you'll play him completely differently. Your outlook on the role and life will have really changed by that point.' Lately, that has been my biggest challenge. At school, especially with all the recordings and so much out there - as young singers we're so worried about doing things right. We don't want to disappoint or to let people down. So, I've made it a point to not listen to recordings or to watch any videos. The maestro, Lawrence Foster, has been wonderful in letting me play with different ideas and to discover Papageno for myself."