By Danny O. Snow for IndieReader:

Back in 1998, we all rooted for the charming little bookshop around the corner, struggling to survive the opening of a megalithic “big box” chain store, in the hit film "You’ve Got Mail." Alas, our lovable little David succumbed to the bookselling Goliath in the movie… as (at the time) did countless indie bookshops, facing ruthless competition from Borders and Barnes & Noble.

Flash forward to 2008: In one day, Borders stock plummeted from around $16 to less than $4 in one day. A few months later, Borders was gone. As the surviving megachain, the stock of Barnes & Noble (NYSE: BKS) was trading around $27 per share by 2009. At that point, many held bright expectations for the future of B&N. Yet by 21 November 2013, its stock closed below $16, with continued speculation of a breakup.

What’s going on? And why might B&N’s current struggles spell good news for those who still love indie booksellers?

The CEO of B&N, William Lynch, resigned in July 2013, as Amazon continued to outpace its brick and mortar rival. This was especially true in the world of e-books and tablet computers, where the Kindle and iPad left B&N’s Nook far behind, in spite of its April launch of Nook Press, a do-it-yourself e-book publishing site for indie writers, which has subsequently fallen short of early expectations.

According to Examiner.com, “This new holiday ad campaign appears to be a ‘Hail Mary’ pass for the brick and mortar bookseller, which has been squeezed by online retailers and failed to gain significant traction in the digital books market. The company continues to struggle in hopes of avoiding the same fate as other major retailers of physical media, such as Borders and Blockbuster, which have closed their doors for good in recent months.”

Yet if B&N faces the same gloomy fate, there might be a sunny side for indie bookshops, and readers who love them. 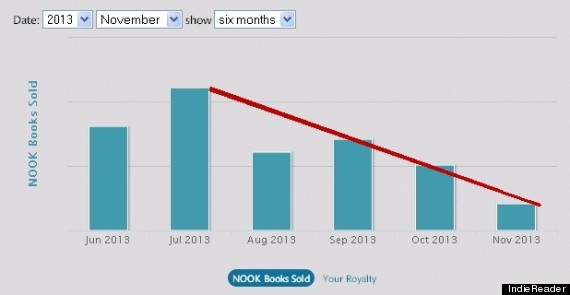 Anecdotal reports suggest that Nook e-book sales have fallen steadily in recent months as Barnes & Noble has struggled. This graph does NOT represent Nook e-book sales overall, but rather only a single publisher’s royalties from 50 +/- titles since June 2013. Of note is the starting point of the decline after July 2013 when B&N’s CEO resigned. If in fact the same pattern applies to publishers generally, it may reflect a growing discomfort by consumers to buy products from a bookseller whose future is uncertain. Whether B&N can turn things around this holiday season is a question that remains open.

According to a 2011 report in the New Orleans Times-Picayune, “The last two years we have certainly seen an increase in our membership, which is one way we can gauge the strength of the independent bookstores,” said Meg Zelickson Smith, a spokeswoman for the American Booksellers Association. “Until [2010] the association’s membership [had] declined for 10 to 15 years,” she said. By 2011, ABA membership had grown to 1,512 member companies in 1,823 locations. In 2013, the number has grown to 1,632 companies in 1,971 locations.

Completing the circle, in 2014 it may be that the tables have turned from the plot of "You’ve Got Mail." As brick and mortar megachains appear to be fading from the landscape of the book world, indie booksellers are enjoying renewed patronage from readers who prefer to shop locally, want a sense of community often absent in the “big box” world, or simply enjoy reading material more eclectic than typical mass-market fare.

While the question of whether their current momentum is enough to shield indie bookshops from the juggernaut of online bookselling giants remains open, there is every indication that the “little shop around the corner” could enjoy a banner holiday season in 2013, and start the new year ahead with a bright outlook.