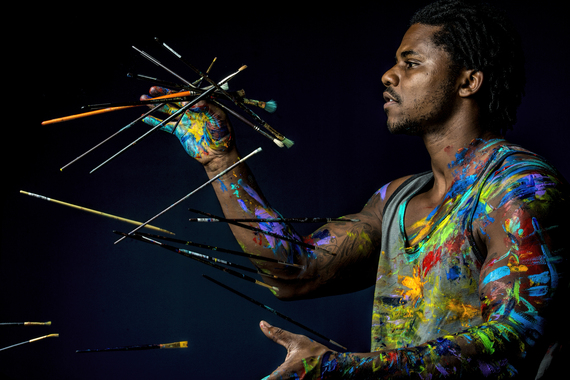 An artist must be free to choose what he does, certainly, but he must also never be afraid to do what he might choose. - Langston Hughes

Football chose him until he chose art. Football was a dream realized, art a dream deferred.

Baron Batch is in third grade. Kids are bustling, loud and chaotic, in the backpack-strewn cafeteria before school as empty buses drive away outside the glass doors. A teacher attempts to quiet the noise, unaware of the power and influence she wields. So she asks, "What do you want to be when you grow up?"

Baron doesn't think twice. He wants to be an artist.

The teacher follows up with a cursory and curt "What else?" Being an artist is not enough in her world.

The teacher's response is incredulous enough-- "Ha! seriously? An artist and a football player?" she thought, and maybe even said aloud-- that by the time she asks the other kids about their career plans, they've figured out that her expectation is something average, something universally attainable, something ordinary. Baron, an observer of human nature even as a child, watches as his classmates' dreams are censored and squelched.

By seventh grade, Baron has joined a football team. And he's good. Very good. Football becomes his Siren, an inescapable calling. It leads him to Texas Tech where he is a standout running back, and then to the NFL in 2011 where he is drafted in the final round. During training camp that year he is the man. There's buzz that he'll be the next seventh-round standout, the kind of talent all fans and coaches dare to hope is lurking in a late round, though it is rarely found there.

Baron tells me about a time he's doing drills opposite James Harrison: "I told myself, 'I'm going to knock the sh-t out of him.'" The moment arrives. Before him stands a man who inspires fear in competitors across the league, a player Baron should be relieved to have a teammate, not an opponent. But this is training camp. And there he is. In a split second Baron has to make a choice. Harrison staring him down, Baron tells himself, "Do what you said you'd do." And he does. And then he does it again. And again.

"The whistle blows. In that moment I was either going to do what I said or not," he said. "Nobody would have known or thought anything of it if I hadn't. I was a seventh-round rookie." But Baron isn't your average seventh-round rookie. He knows that, and now his teammates see it. The media notices him too. Fans start to get excited about this late-round prospect with preternatural tenacity and drive.

Baron is living the NFL life. He remembers walking around Pittsburgh with a group of teammates, all wearing their Steelers jerseys. They are recognized, and another player says, "They love us." Then, Baron has an epiphany: "They don't even know us. How can they love us?" He wants to be more than a cog in the machine.

Then, a shocking and ostensibly devastating turn of events that he unexpectedly describes as "the most glorious thing that has ever happened to me." Instead of playing in his first NFL game after a tremendously promising performance at training camp, he tears his ACL on the last play of the last practice before the real deal. He's out for a year and then is finally strong enough to return to the field, but by now he has seen a glimpse of a world beyond football.

The injury is a reminder that until now he has only had the illusion of control over his life. Autonomy has been only as real as ignis fatuus, a chimera. A quiet rebel, Baron is tormented by his powerlessness. He plays a season after his knee heals, but the feeling of being little more than a pawn on the field does not jibe with the essence of Baron Batch. "I obey my own rules," he tells me. Football does not allow for that.

Like the voice of a Siren, the allure of football has not led him home in anything more than a geographic sense. The compliance and submission required to be a good player is eating away at his soul, and the realization is sinking in that football chose him. He did not choose football. His physical gifts, not his true purpose in life, have been determining his fate. Wearing a uniform is a reminder he is wearing a mask, playing a part. Once he's gone, someone else will wear that number, run that play. He's expendable. A puppet. At least, that how it feels.

In Homer's Odyssey the enchantress Circe warns, "You will come to the Sirens who beguile all men that approach them. Whoever encounters them unawares and listens to their voices will never joy at reaching them. Instead the Sirens tempt him with their limpid song, as they sit there in the meadow with a vast heap of moldering corpses, bones on which hangs the shriveled skin."

What happens to a dream deferred? Does it dry up like a raisin in the sun? - Langston Hughes

Baron is cut at the end of the 2013 season, but instead of feeling disappointed, he views it as a gift. His life is no longer scripted, and he is free. "I was an entertainer as a football player," he tells me. "I was inside of a box. Then I was out of the box. Then I realized that there is no box." The Sirens that brought him to the NFL do not leave him shriveled in a heap of moldering corpses, nor does his dream shrivel like a raisin in the sun. Far from it.

He shares, "There is freedom with being at peace with who you are. I don't know why people are afraid of being something awesome."

Most people would consider being a professional football player overwhelmingly and insuperably awesome. For Baron, though, there is something more awesome. Without football determining his fate, Baron is free to pursue his passion and original dream: art.

"I had to make a bold move. I realized I had to be brave enough to begin to unlock myself. Football happened by accident. It was something I was good at. That's the danger. It is so easy to be good at something and feel like that is something you should do," he tells me.

Baron now self-identifies as an artist. Not a former football player, nor a former Steeler. He self-identifies as what he always wanted to be, and who he was destined to become. With this metamorphosis complete, Baron now sees a greater significance in being drafted by the Steelers. It turns out it wasn't to become a star on the field; it was to become, in his words, "the person I chose, not just the person I was based on where I happened to be in the moment." He explains, "It was getting closer to some sort of destiny for me. This is where I always wanted to be."

As an artist, his life's work transcends a moment in time and has a lasting impact on those who experience it. "This will last when I'm not around," he shares. "When I was on the football field, everything I did in that split second was the final outcome. There is always someone else who will play running back. Everything I do now is one of a kind."

The Texas native embraces Pittsburgh as home, in a sense that goes well beyond the location of his physical address: "Pittsburgh is one of the most important cities in the history of the world. All of the steel was produced here that built the rest of America. It is the best feeling ever to be a part of this city. Pittsburgh companies are different than regular companies. They are titans of industry."

While Baron is an artist, he is also a man of industry and an entrepreneur. Studio AM is his hub, the space for creating momentum, presence, brilliance and change. While Batch is the artist, former Steelers offensive lineman John Malecki is also involved with the studio as the builder, crafting custom pieces of furniture. From his hub, Baron works on making better art, building better relationships, and becoming a better business man.

Currently on display at the Pittsburgh International Airport is an installation called Don't Forget to Write which Batch painted live, accompanied by the Three Rivers Young People Orchestra, DJ Bamboo, and Beauty Slap. The project is also interactive and includes the words of the travelers and locals that reveal their love for Pittsburgh. Baron discloses the uniqueness of the project: "It's a collaborative project that involves an entire region and an entire culture at a specific period of time."

In addition to strengthening and building a community, Baron is affirming the permanence of art--and words. The Internet is permanent, yet paradoxically, since the advent of the Internet, words have become more ephemeral and less intentional. Baron hopes to capture the moment and engender an appreciation of the "now" by creating something that will last forever.

Baron Batch's ability as a football player determined the course of his life until 2013 when he was released by the Steelers and had the chance to live his life in a purposeful way-- as an artist. "This is on the other side of the spectrum," he says. "As a football player, everything I put out there ended in the moment."

Baron is mindful of his impact both in the present and in perpetuity. "I didn't want to exist, and then die. That will never be acceptable for me." Though football is no longer his life, he appreciates his time with the Steelers: "To be part of the Steelers history was pretty cool. It wasn't just football. It was legacy. There was an expectation and a standard."

Being released from the Steelers has made him the master of his destiny. Free, he is choosing what he does, and doing what he chooses.

Because of these choices, Baron Batch's imprint on the community and culture will endure, even after he is gone.

A version of this article first appeared on Behind the Steel Curtain. Reprinted with permission.