Barry Blitt is the artist behind this week's very controversial New Yorker cover of Barack and Michelle Obama. Via email, I asked him to respond to those who feel that his work was offensive, and to explain his own personal feelings about the Obamas. Here's what he wrote:

I think the idea that the Obamas are branded as unpatriotic [let alone as terrorists] in certain sectors is preposterous. It seemed to me that depicting the concept would show it as the fear-mongering ridiculousness that it is.

And in retrospect, given the outcry, is he glad he made the art?

"Retrospect? Outcry?" he wrote. "The magazine just came out ten minutes ago, at least give me a few days to decide whether to regret it or not..."

Rachel Sklar has much more.

Update: Three of Blitt's previous cover pieces are below. Note the Ahmadinejad bathroom shot, probably the most provocative recent New Yorker cover prior to the current one. 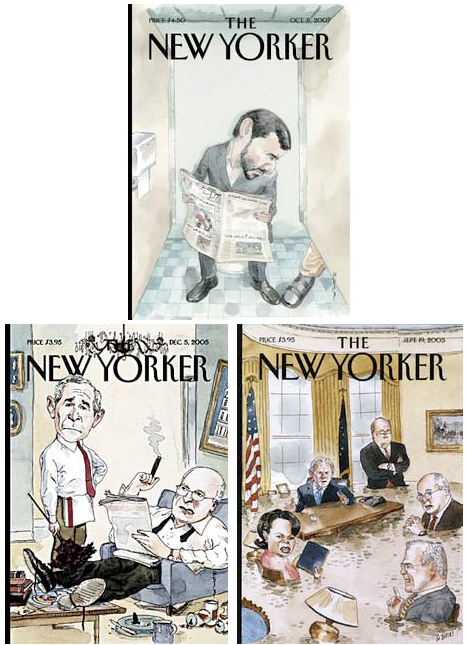