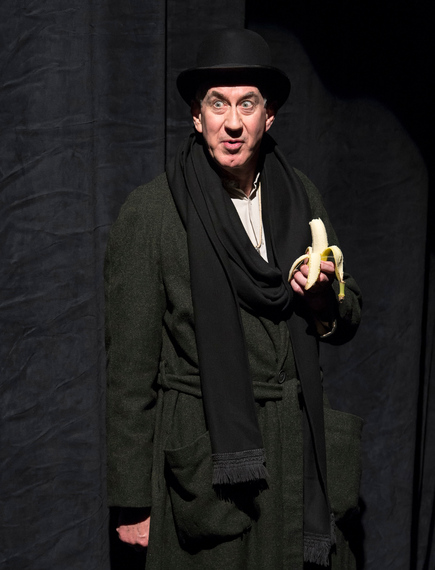 Prominent Irish actor Barry McGovern, who is considered one of the leading interpreters of the work of Samuel Beckett, performs texts selected from three of Beckett's novels, Molloy, Malone Dies and The Unnamable. While Beckett is best known for his stage works, the novels reflect the bleakness of Beckett's world view and his obsession with language.

Skillfully selected by McGovern and his collaborator, Gerry Dukes, the texts for this performance, entitled I'll Go On, highlight both the dramatic elements of the novels and their rich language. They also powerfully convey the character of each of the novels' protagonists - Molloy, Malone and the Unnamable. Whether it is Molloy wandering the countryside searching for a way home and inquiring about the meaning of everyday events, or Malone withdrawing into aimless meditation or the Unnamable, a sort of linguistic Delphic oracle, McGovern draws out the emotion and passion from the torrent of the characters' thoughts and words.

Few actors could pull this off with the kind of power and authenticity that McGovern brings to the stage. His rhythms and cadence seem to be saturated with Beckett's voice - even when uttering words that were meant for the page rather than the stage. McGovern's facial expressions and physical gestures convey every bit as much as Beckett's words, communicating the hopelessness and desperation of the human condition.

This is not to suggest that all is bleakness and despair in this rendition of Beckett's vision. Quite the contrary. McGovern squeezes mounds of earthy humor from the text, tweaking Beckett's view of humanity in all its absurdity. Like the playwright himself, Beckett's characters have a jaundiced, cynical view of human beings, which is surprisingly contemporary in its comedic tone. For those in search of a dynamic, funny and powerfully truthful rendition of Samuel Beckett, look no farther than the extraordinary performance by Barry McGovern.

I'll Go On plays through February 9th at the Kirk Douglas Theatre in Los Angeles.