SAN FRANCISCO -- More than three dozen protesters were arrested Monday during a chaotic run through downtown San Francisco that snarled traffic and train service during the evening commute.

The demonstrations started small at about 5 p.m. in the Bay Area Rapid Transit agency's Civic Center platform, where two dozen protesters gathered to vent their frustration over BART's shutting wireless service in its downtown San Francisco stations Aug. 11 to quell a brewing protest that day.

BART police arrested four demonstrators on the platform for trespassing on transit property, closed the station and forced the remaining protesters above ground onto the city's busy Market Street.

The Civic Center and nearby Powell Street stations remained closed during most of the three-hour protest, angering commuters unable to catch trains home and competing for scarce cabs that were stuck in a massive traffic jam caused by demonstrators blocking streets.

From the Civic Center station, the protesters grew to more than 100 and marched up and down Market Street for the next three hours, with occasional splinter groups breaking off down side streets. Along the way, they tipped over trash cans, threw firecrackers and shouted at police. Police asked an upscale mall to briefly close as the demonstration passed by and one man was arrested for attempting to start a fire at a nearby corner.

Most of the protesters were arrested in a police "encirclement" after they refused orders to disburse near Civic Center Plaza at about 8:30 p.m.

The demonstration was the second in seven days in protest of BART's cutting wireless service on Aug. 11 in a successful bid to disrupt a protest that day over transit police shooting and killing a transient on July 3.

The protest Aug. 15 was larger and prompted the brief closure of four downtown stations as more than 300 protesters marched through downtown San Francisco.

Monday's protest lasted longer as protesters kept San Francisco and BART police busy keeping them from blocking traffic and approaching subway stations. Small groups splintered from the main marchers, making it difficult for police to monitor them all.

"I don't care about the cellphone stuff," said Tony Wallace, a homeless man standing in front of the payday loans store watching the protesters after BART police closed the station below and forced everybody onto the streets. "I do care about them shooting people. They are out of control, for sure."

Despite the smaller turnout, transit police showed less tolerance and patience than the previous demonstration.

"This has been an ongoing process," BART Deputy Chief Daniel O. Hartwig said of the decision to make arrest protesters on the subway platform for the first time.

Hartwig said the four will be charged with trespassing on rail transit property. BART prohibits demonstrations on its platforms, citing safety concerns.

The social activist group Anonymous called for the protests Monday and last week in response to BART shutting wireless service at four of its stations Aug. 11.

The transit agency cut wireless service that day after learning organizers of a protest of the transient's shooting death were planning on issuing last-minute instructions through social networks and text messaging designed to disrupt the rush-hour commute.

The Aug. 11 protest failed to materialize after the BART tactic was implemented, and the commute went smoothly. But the transit agency drew worldwide criticism and is now at the center of a heated debate over free speech, social networks and public safety.

"I don't even own a cellphone, but what BART did was wrong," said David Kubrin, 72, of San Francisco. "We are seeing elements of a police state more and more every day."

The nine-member BART board of directors has scheduled a special meeting Wednesday to discuss the policy. BART police kept the wireless service on during the last two protests.

Take a look at images from Monday's protest below: 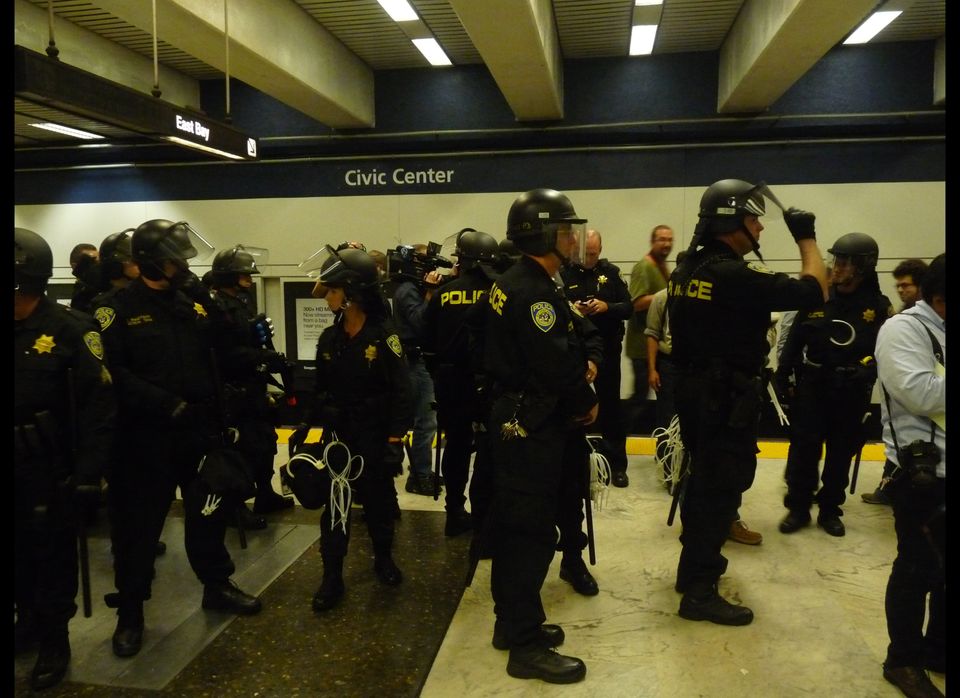