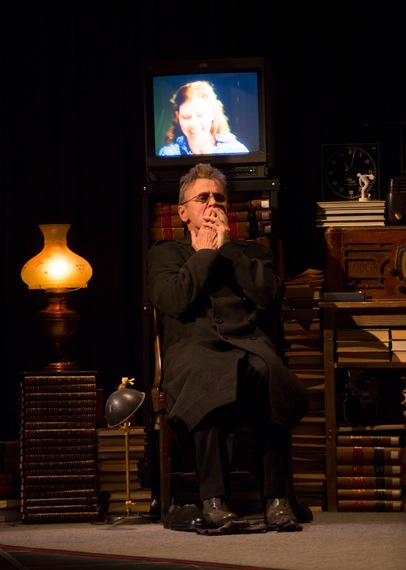 Even in this subdued and somber rendering of a pair of Chekhov stories, Mikhail Baryshnikov and his creative partners from the Big Dance Theater display a magical grace and style that transcends the bleakness of Chekhov's tales. Big Dance Theater directors Annie-B Parson and Paul Lazar, who also adapted the Chekhov stories, fuse techniques from theater, dance, music and video into a mélange performance. They employ live and surveillance video, folk dance, contemporary hunting references and lots of other odds and ends to capture a contemporary snapshot of Chekhov's worldview.

The stories are simple but powerful tales of love. The hero of Man in A Case is a schoolteacher, encased in his own lonely and regimented existence, who falls in love but discovers it can never be fulfilled. About Love is about a man who fails to act on his passion for a married woman, and is filled with regret.

While the production employs many familiar devices from avant-garde theater pioneers like Richard Foreman, it manages to create a tapestry that is arresting and complex. The ensemble is made of gifted actor/dancers, who don't get much chance to display their talents, but are able to convey a sense of style and movement to the piece. Particularly notable are Tymberly Canale, who plays the love interest in both parts, as well as Chris Giarmo and Aaron Mattocks, whose extraordinary vocal talents add much to the lovely musical score.

But it is Baryshnikov who is the heart and soul of the production. His movements - though largely restricted to his acting performance and simple choreography - are performed with such grace and precision that we are reminded of the power of movement in the hands of a genius of dance. It was once said of Mickey Mantle, Willie Mays and a few other great athletes that "they float six inches above the ground." The same can be said of Baryshnikov, where every gesture, even down to the smallest movement of the hands, is virtually transcendent. The experience alone of watching Baryshnikov move about the stage makes this production invaluable.