The National Pastime might seem out of synch with the high-end art world. Clean well-lit indoor galleries that serve free wine to an elite client base seems to be the polar opposite of an outdoor stadium overcharging for watered-down beer sold to the masses.

But like many a muse, baseball captures the imaginations of plenty of artists and, as some art galleries in Los Angeles are finding out, wealthy art collectors as well. But as with all things in the postmodern art world of today, the presentation has to defeat some form of predictability or it isn't really considered art.

At the Known Gallery in Los Angeles, "Out of Left Field" presents the work of two Los Angeles artists obsessed with baseball and with tweaking the conventions of the sport to suit their own idiosyncratic visions. 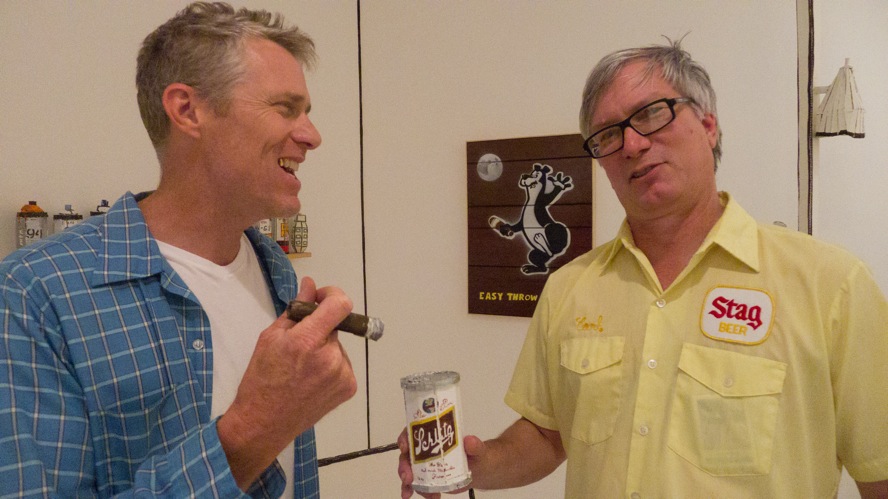 Artists Pat Riot and Bill Barminksi at "Out of Left Field" at the KNOWN Gallery in Los Angeles Thru June 8.

This two person exhibition features Pat Riot and L.A. legend Bill Barminski. Who knew that an icon of the L.A. art world, Barminski, was a lifelong Cincinnati Reds fan and still considers Pete Rose his favorite baseball player?! The love of sport can reveal more about a man than any exterior pose he might ever take.

Pat Riot veers from slick conceptualist to sarcastic pop collage master in Known Gallery's main room. His portion of the exhibition has large portraits of basball players that appeared at first to be pointillist paintings. But this is no Seurat. We're talking Reggie! 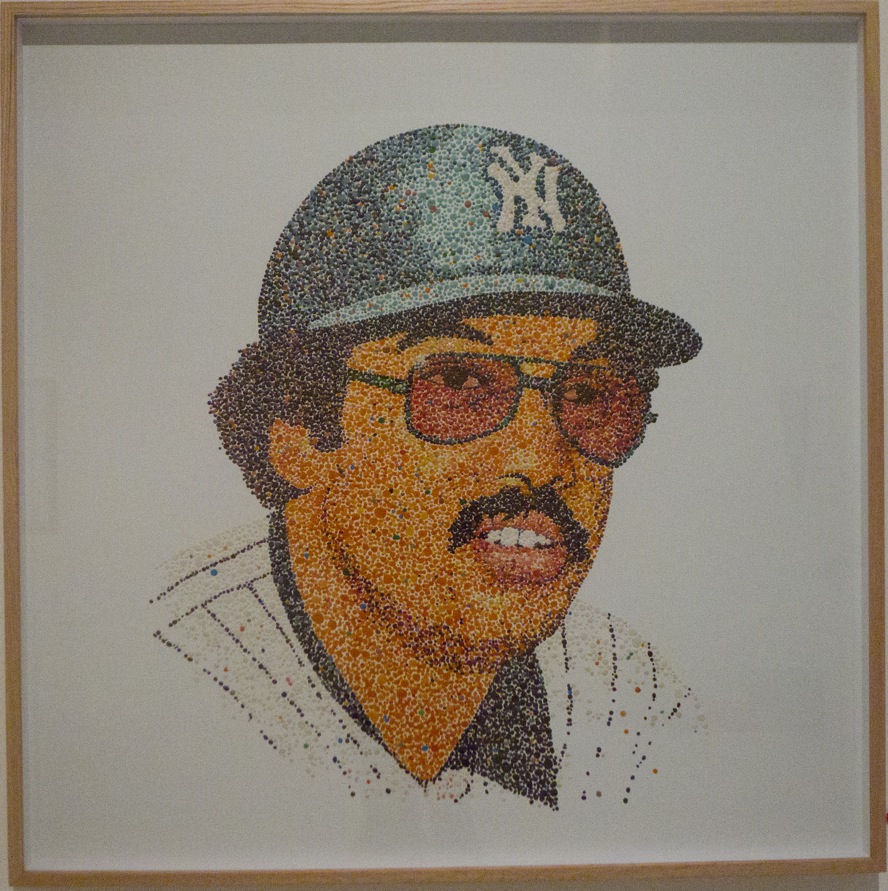 Reggie Jackson as a color-blind test made out of chewing gum.

The points in these pictures are not paint. They are made with chewed bubblegum. As every baseball fan knows, just about every player in the game chews tobacco, sunflower seeds or bubblegum during the game (this explains to the uninitiated why players are always spitting). Be it a timing mechanism or superstition, bubblegum is integrally linked to baseball. 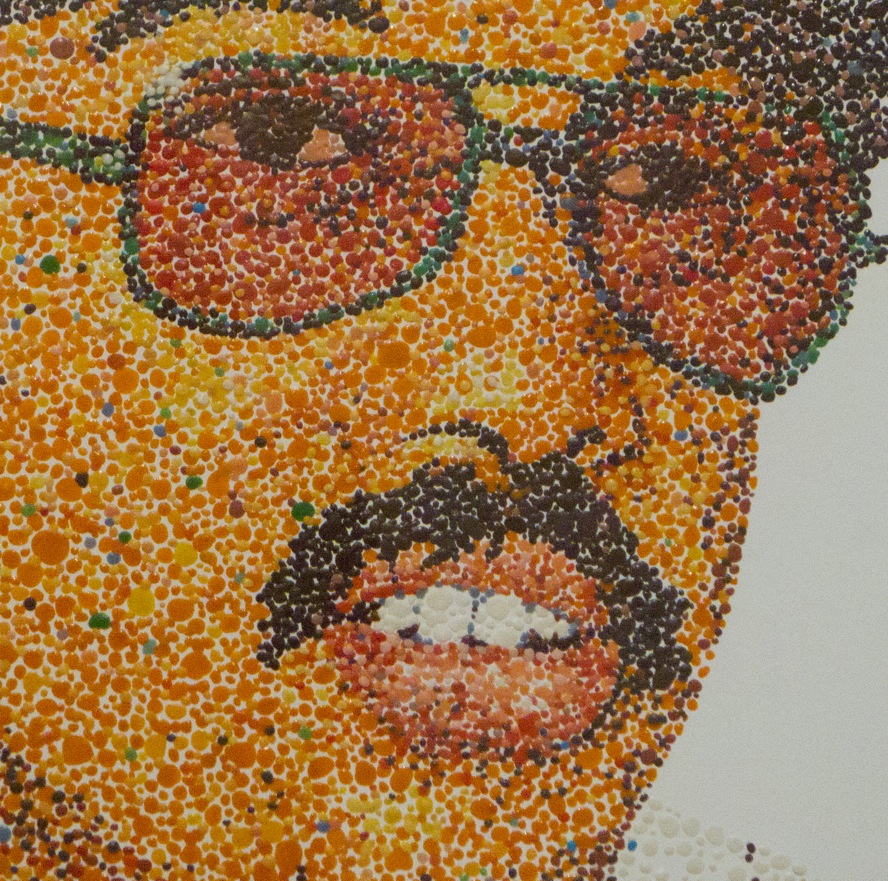 Closeup of "The Straw That Stirs The Drink"

But there are many ways to paint a pointillist portrait, even with chewed gum. Each of his large portraits is a uniform 48 inches square aluminum panel with a flawless white background. The composition of Riot's bubblegum portraits mimics that of an opthamologist's color-blind test. 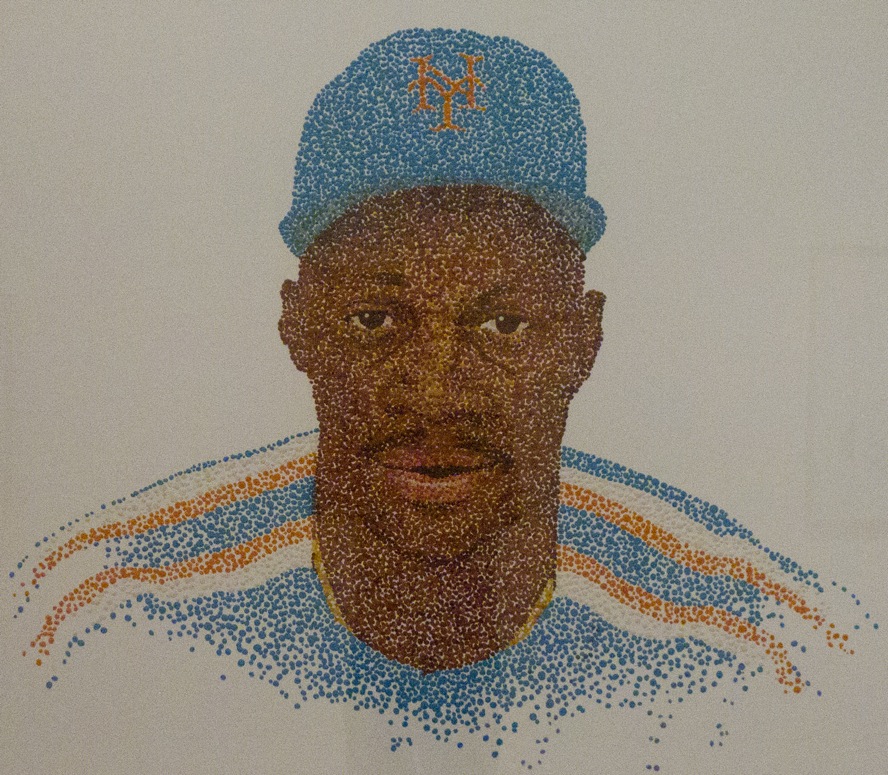 That the patterns of the dots in his paintings mimic the the structure of color-blind tests delivers the "ahhhh" moment when one realizes that all of Riot's portraits are of African American players. Hank Aaron, Dave Winfield, Daryl Strawberry, Reggie Jackson, Matt Kemp and Eddie Murray line the long side walls of this pristine Fairfax-district temple of aesthetics. And at the far wall hovering over the entire show is the portrait of Jackie Robinson. 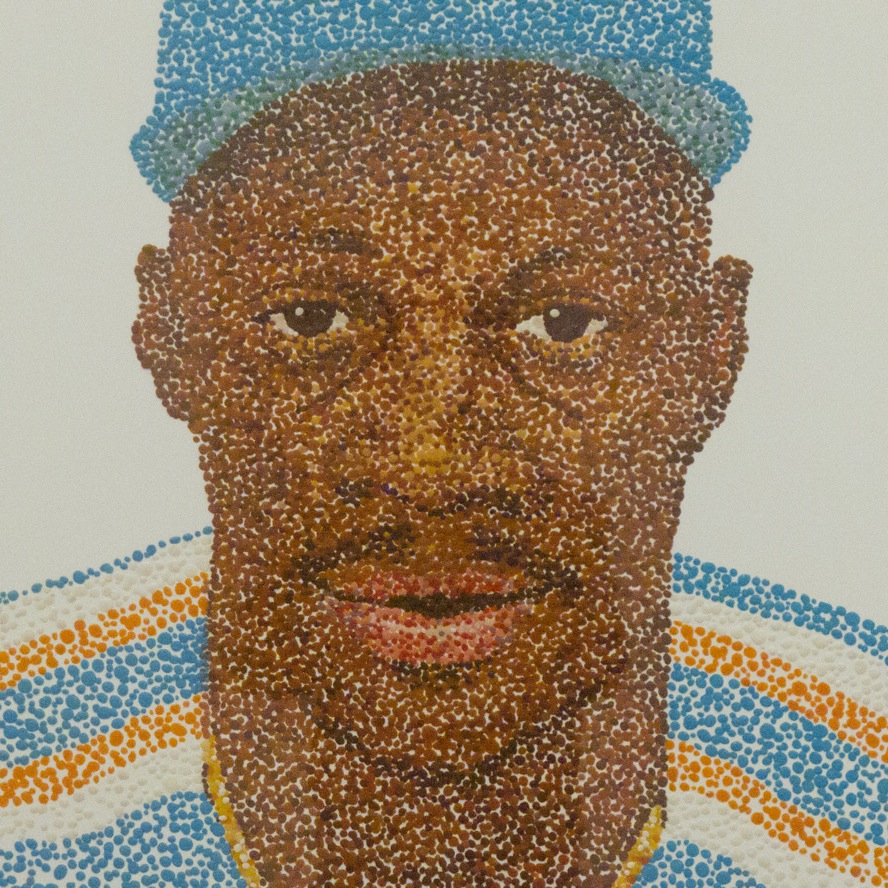 Closeup of "The Straw"

Baseball became "color blind" when Robinson joined the bigs in 1947. The conceptual layers are there for the sophisticated viewer to enjoy underneath the surface of Riot's masterful pictures. Perhaps Curt Flood, the black man who stood up to baseball's owners and fomented free agency would have been a more thoughtful inclusion, or Dave Parker in his years with the Reds when we were reminded that racism wasn't magically cured with Robinson, as was revealed when the team's owner, Marge Schott, referred to Parker as "My Million-Dollar Nigger" in 1990. But maybe I am just being a baseball nerd with these quibbles. The presentation of the portraits is conceptually and sensually stupendous, tackling a serious subject within the layers of all the possibilities that art presents. 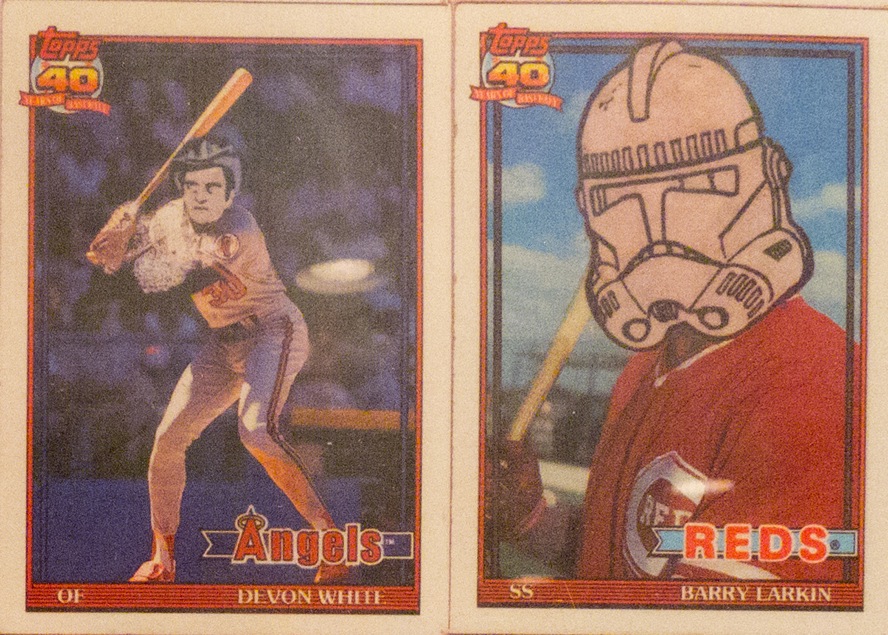 In between each of Riot's portraits is a large framed collage. Using a sheet of vintage Topps baseball cards, Riot collages cartoon heads from comic books and other print media onto each player. I asked him how he chose the subject matter for these thousands of images and he was clear that he almost always chose the comic head for how it fit over the player. These precisely cut comic heads were almost never a reference to the player himself. 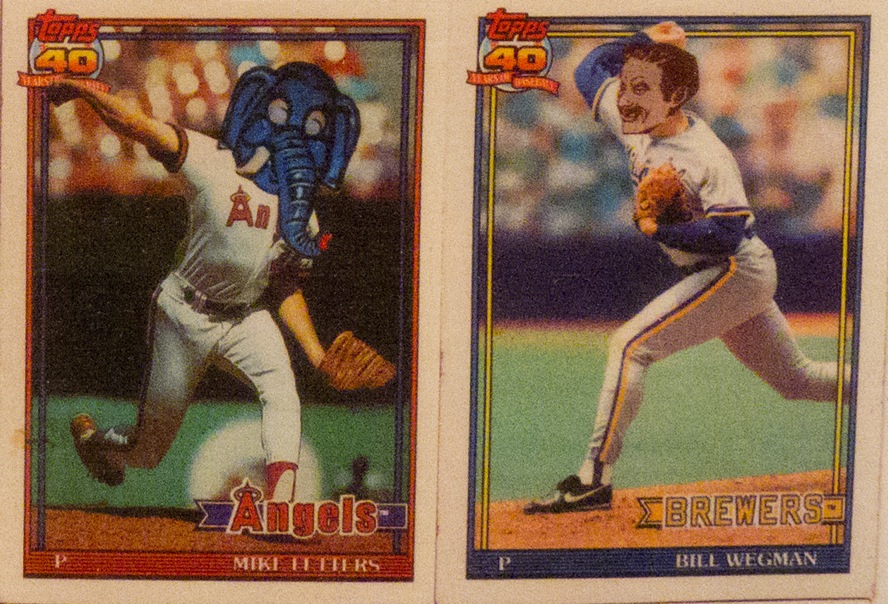 The uncut card sheets from the Topps printing press, long collectibles in their own right, are collaged and framed. They hang in Riot's show between each color-blind portrait, functioning almost as stained glass windows in this contemplative chapel of baseball lore. Upon closer inspection they provide wonderful comic relief. 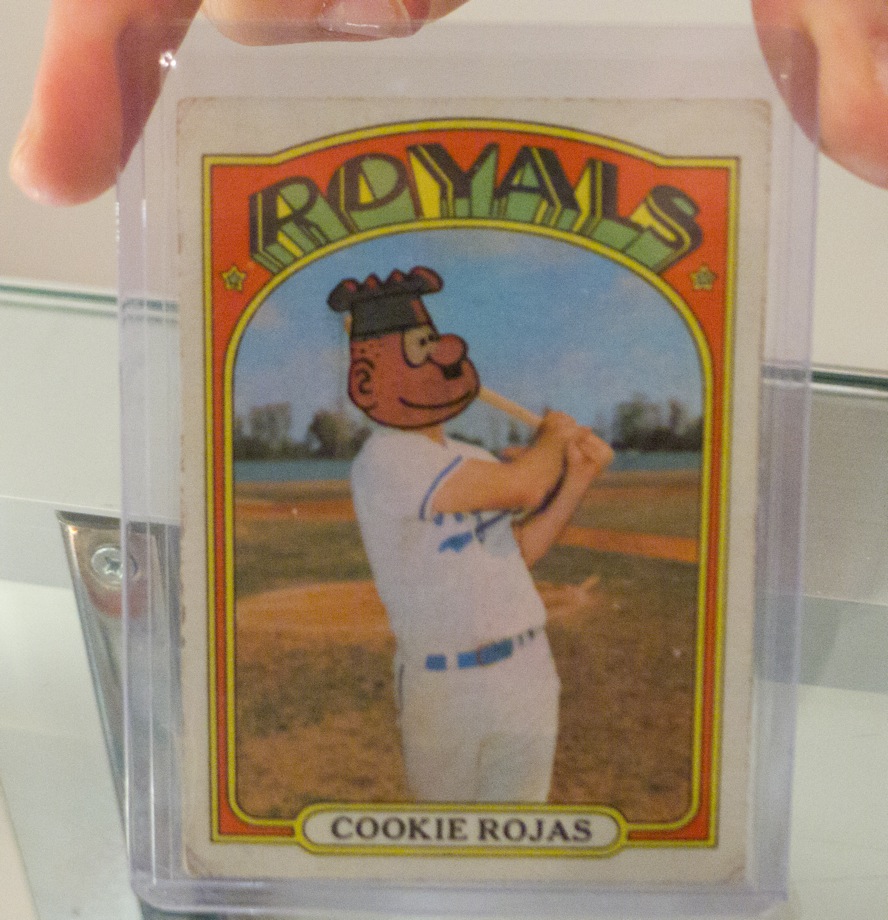 Cookie Rojas transformed into the Sargent from Beetle Bailey

The ultimate Post-Modern trope of juxtaposing two unrelated images and expecting the viewer to make an association is alive in these pop culture collage conflations. The need to make associations is inevitable. The more informed a baseball fan you are, the more rewarding the search for reason in a sea of chaotic images becomes.

Take for example the head of the Sargent from the "Beetle Bailey" cartoon superimposed over a 1972 Topps card of Kansas City Royals infielder Cookie Rojas. The artist has merely chosen this combination for the matching proportions of the player on the card and those of the cartoon head. But a baseball fan can make a connection -- later in life, after his playing days, Rojas managed the hapless 1988 Angels for most of the season and I immediately imagined the caricature of military authority overseeing 25 hapless Beetle Baileys with bats and gloves. Post-Modernism's privileging of the viewer's own associations is alive and well at the old ball game. 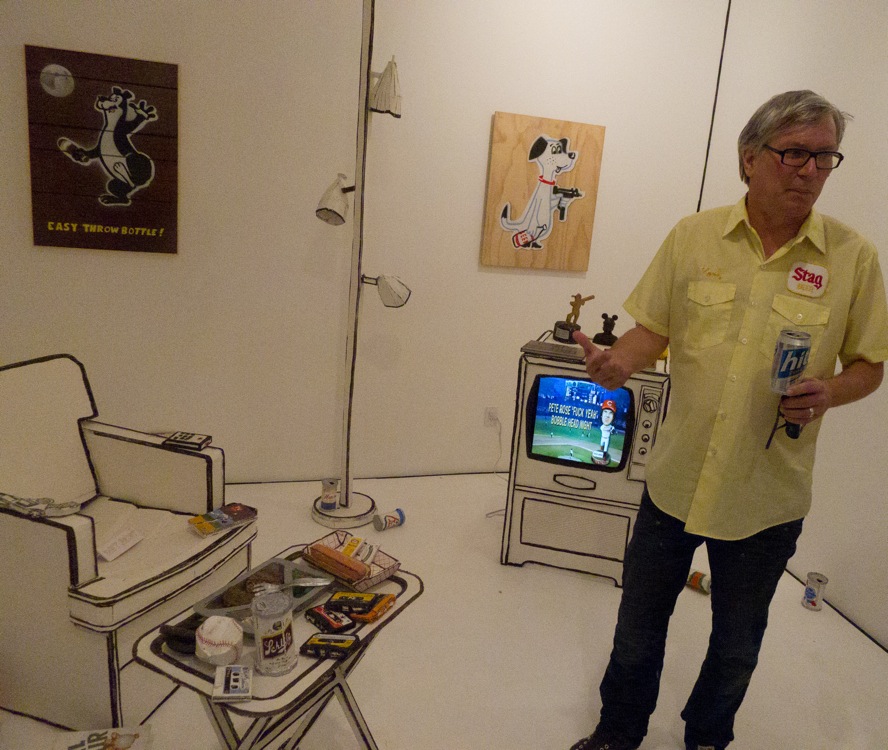 Accompanying Pat Riot's exhibition in the Known Gallery's Project Space is an installation by Bill Barminski that celebrates offbeat moments in baseball history and revels in the ordinary fan's experience of the game on television at home.

Barminski has recreated by hand a painted cardboard rendition of his Uncle's circa-1970 sports mancave. A mancave is an almost sacred space of the hardcore sports fan, usually adorned with memorabilia from his favorite teams and centered around the big screen television. But the origin of the mancave of today's luxury bachelor pads is much more proletariat. As Barminski constructs here, old television sets were hardly the high-definition wonders of today. Boxy and functional, Barminski has vintage game footage running with interruptions of some of his more anarchic art videos.

The cardboard furniture, floor lamp and TV dinner reek of early 1970s middle class squalor. On the wall are Barminski's mock beer posters. Forty years ago, baseball broadcasts were awash in commercial sponsorship for bland beer brands that make even today's watered down Coors and Budweiser seem like Craft Brews. The artist pokes fun at a sub-genre known not just to baseball fans but a subset of fans that are old enough to recall the broadcast culture of yesteryear, 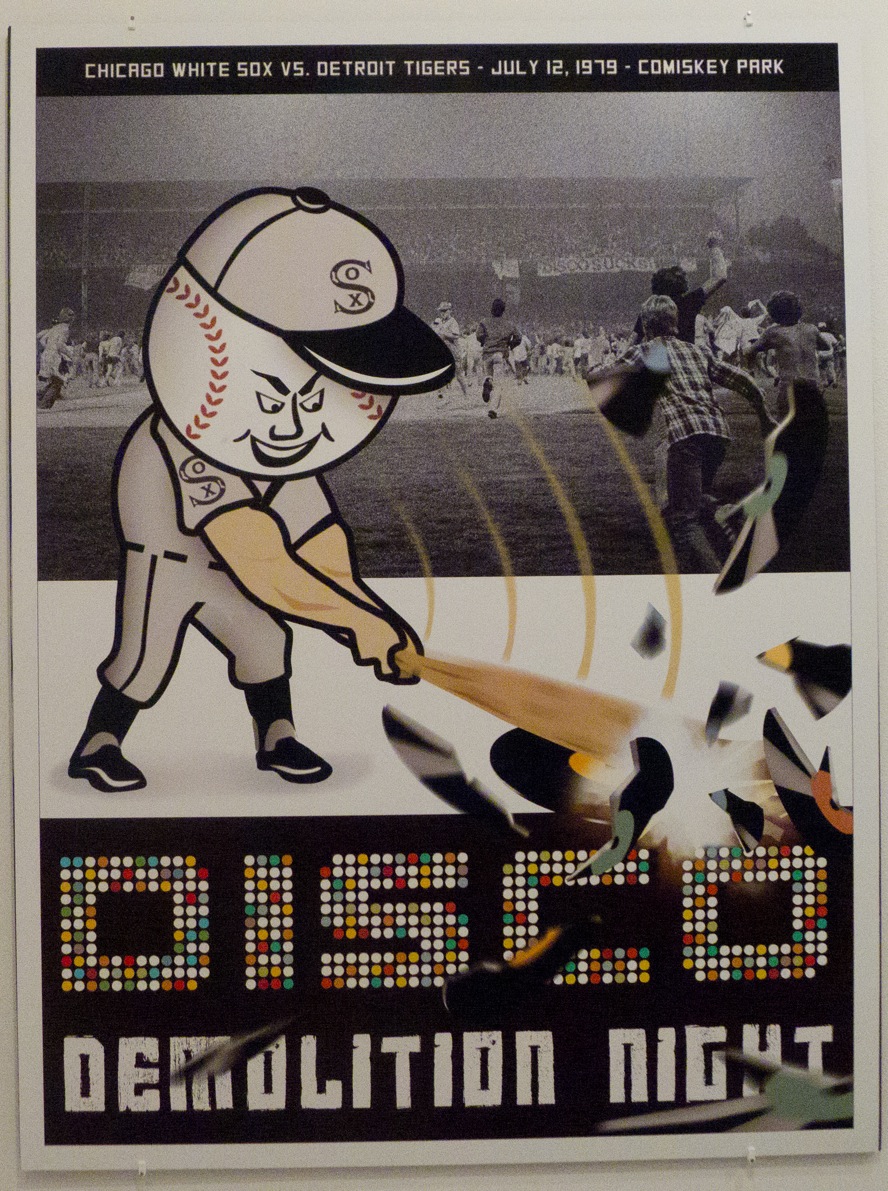 Also in Barminski's exhibit is a series of large digital print posters mock-commemorating baseball lore. While official baseball channels like the Hall of Fame in Cooperstown, New York celebrate lifetime achievements and historic events, Barminski celebrates events that baseball's bosses would rather forget but are nonetheless deeply etched within fan culture.

In 1979, the Chicago White Sox hosted "Disco Demolition Night" which resulted in the stadium's field being so trashed by fans that it was deemed unfit to play on and the home team was forced to forfeit the second game of a doubleheader. While an embarrassment such as this is ignored by baseball in favor of marketable memories, Barminski creates a visual tribute to an indelible moment of anarchy in a game known for its privileging of symmetrical perfection. 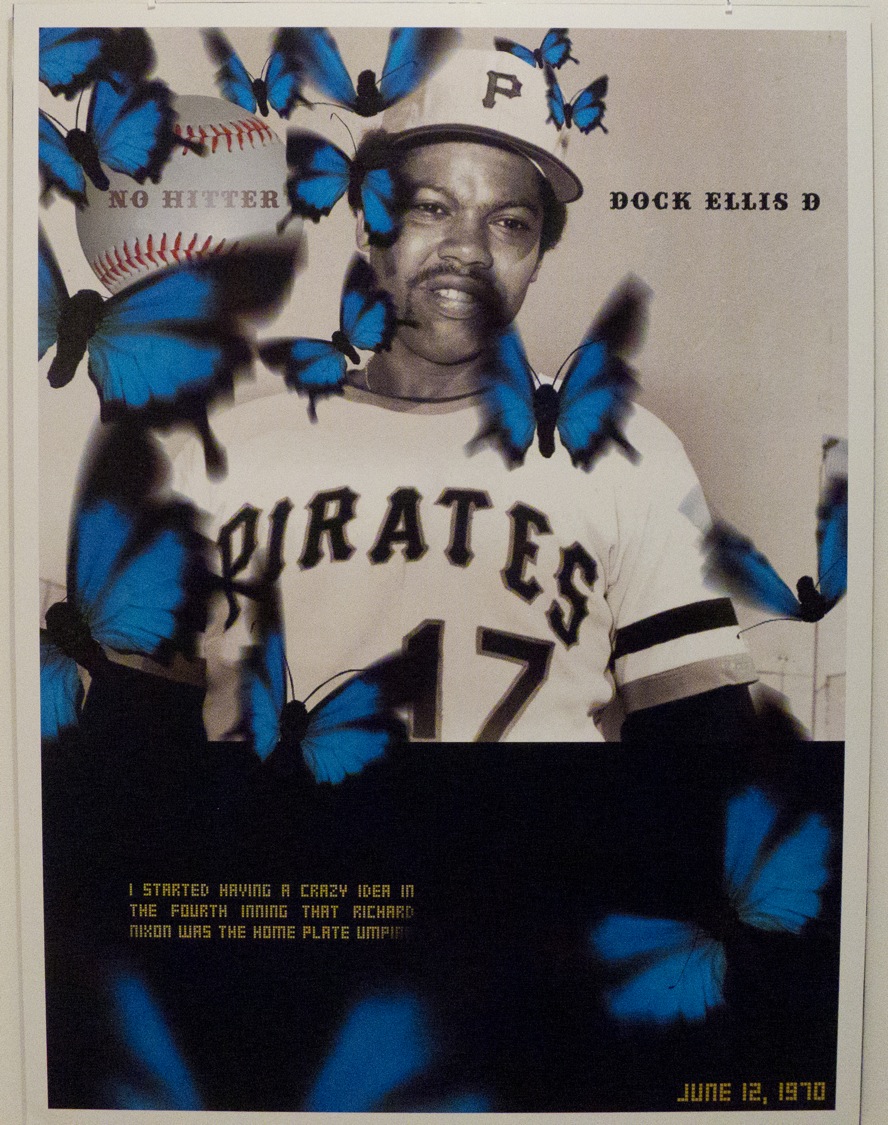 Doc Ellis pitched a No-Hitter under the influence of LSD

Equally infamous was the June 1970 no-hitter pitched by Doc Ellis under the influence of LSD. The admission of this came years later and is ignored by the powers that be but remains a celebrated touchstone among fans of the game that understand how truly reflecting of its times this monumental achievement was. Barminski adds digital hallucinatory butterflies unleashed about the pitcher. Usually these metaphoric beasts are locked in a nervous pitcher's stomach, but here Doc's tab of good acid is illustrated as letting them out! 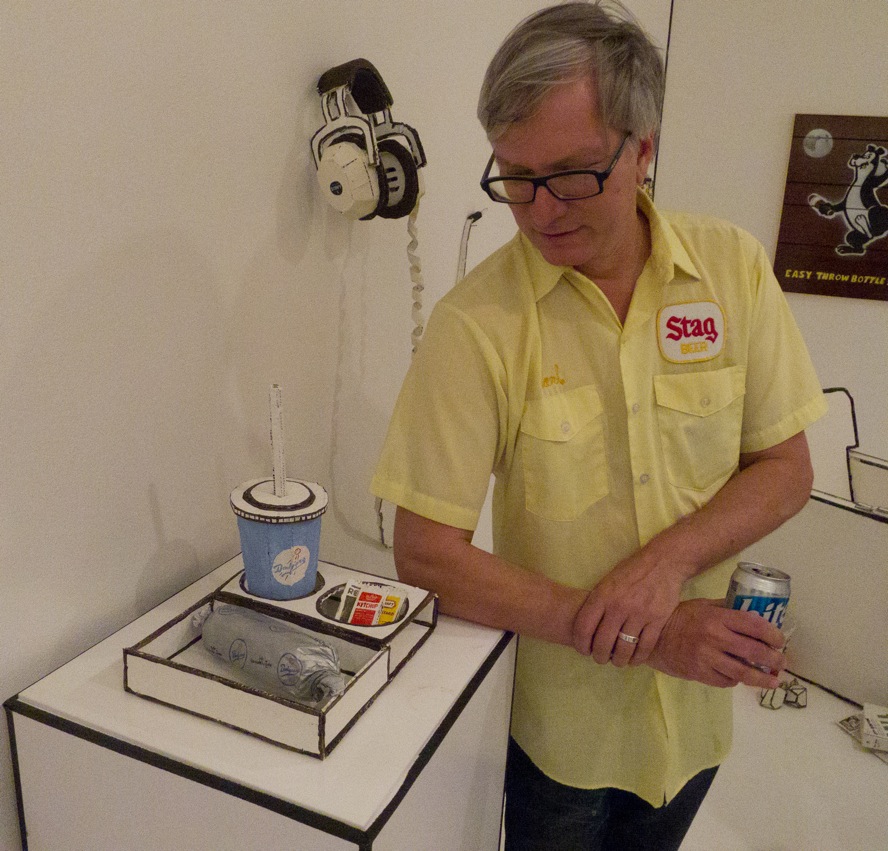 For all of its massive marketing presence in America, baseball has a surprising tin ear to fan culture as it exists outside of official channels. "Out of Left Field" reveals what happens when fans are allowed complete freedom to create a hierarchy of what is most important to them about he national pastime.

A tenet of Post-Modernism has been the steadfast assertion that simulations and copies carry the value of the original. The fine art world has struggled with this idea of a post-masterpiece world. One painter seems to have found a solution to live up to Warhol's dictum of wanting to be a machine and yet still make handmade mini-masterpieces of the most widely-collected baseball keepsake of them all -- the baseball card. 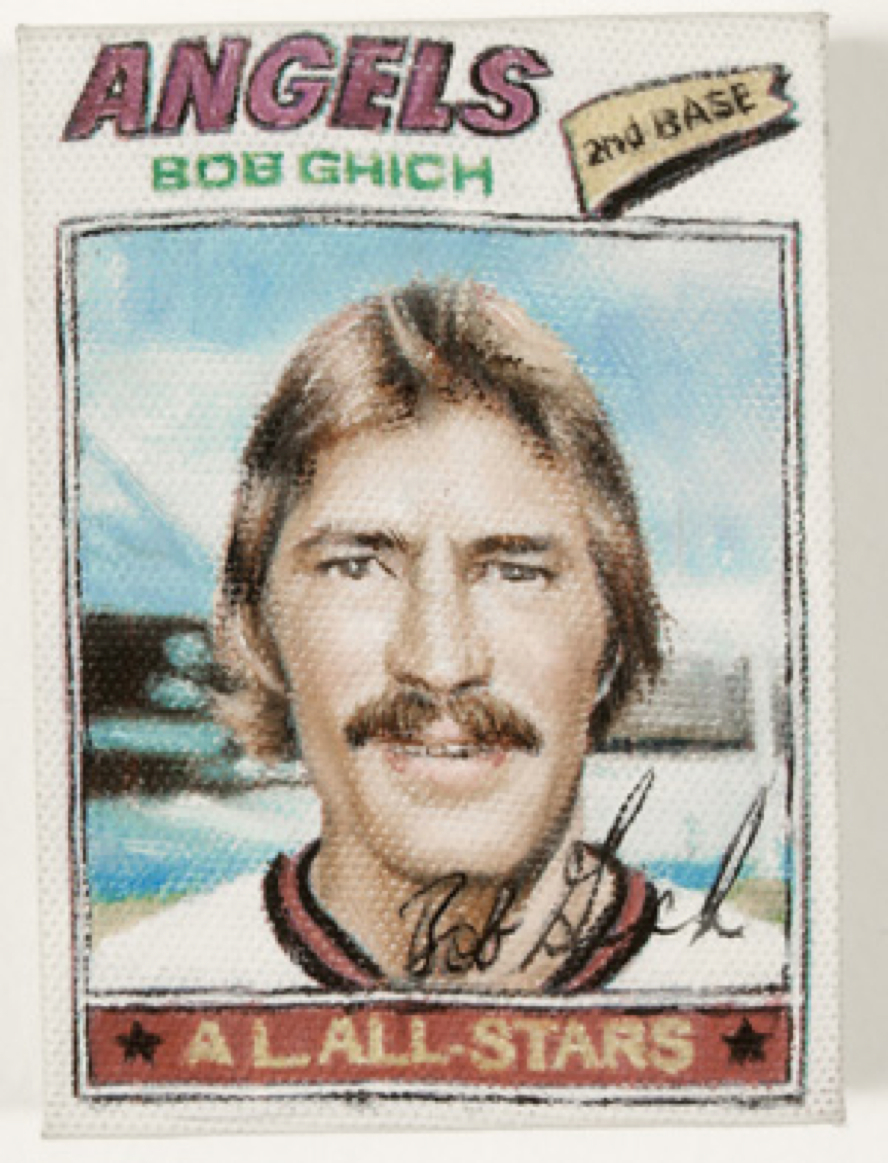 In his recent show 1977 at Charlie James Gallery in Los Angeles, canvasses that were stretched 3 1/2 inches tall by 2 3/4 inches wide lined the gallery walls. Each was a faithful reproduction of a 1977 Topps baseball card. United by a common year, the target audience is obviously men over 35 with money to drop a few hundred bucks on near-perfect hand-painted renditions of the icons of their lost boyhood. 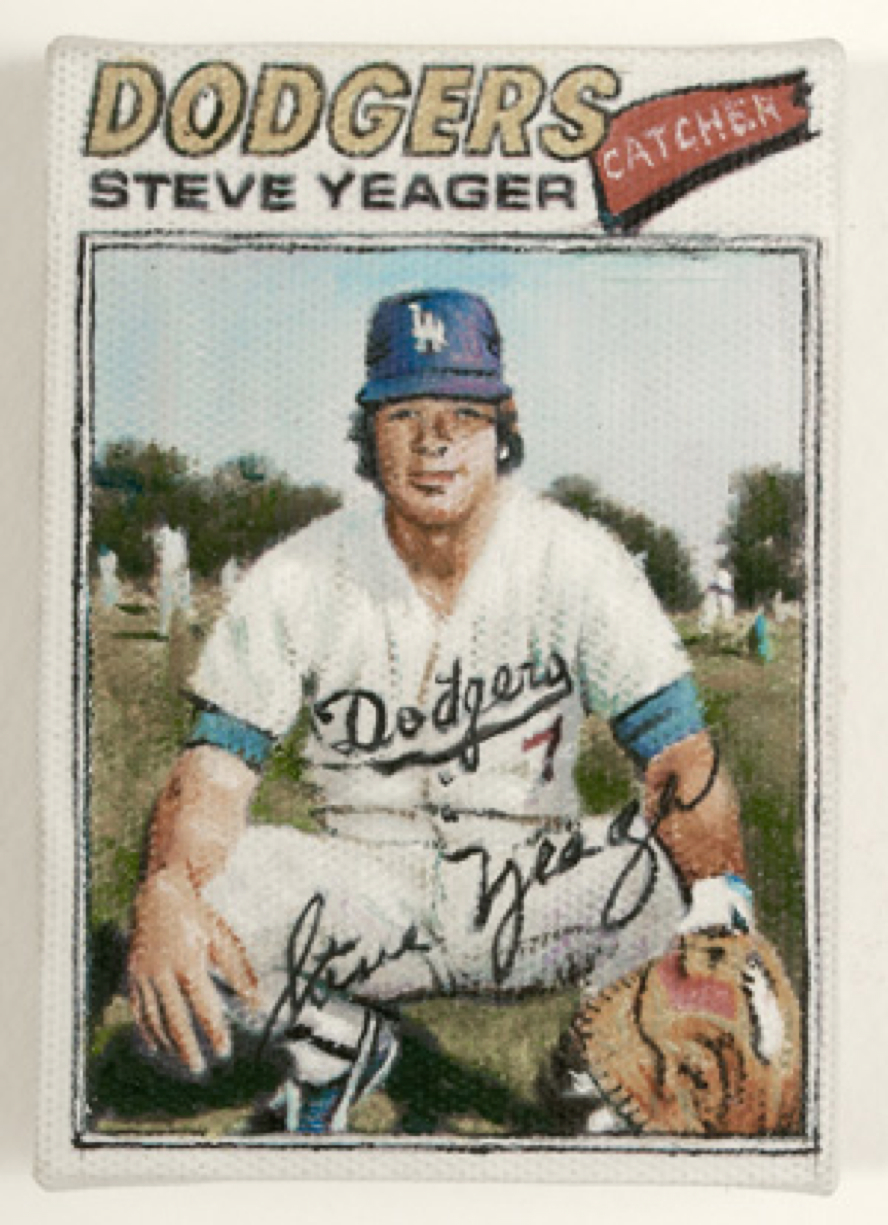 The same cards would be $1 plus shipping on eBay. Why not just hang one in your house instead of one of these pictures (which start at $350)? The seductive nature of a Jim Thompson painting lies in its Postmodern nature. A baseball card is a keepsake of a player. A Thompson is a rendition of that keepsake, not the player. While many a fan has purchased Thompson paintings because of the player who is rendered therein, any old painting of that player will not do. The rendition of the baseball card itself -- its lettering, its scale -- delivers the sentimental attachment that all great fans seek with the past.

Thompson's skillful, exacting and delicate paint application is rigorously aimed at copying, but the choice of subject could not be further from cold machinery. A man's relationship to his boyhood sports idols is akin to his relationship with his god, perhaps even in a more idealized form. Thompson arrives at the manufacturing of religious icons by treading down the basepaths of America's most sentimental sport. 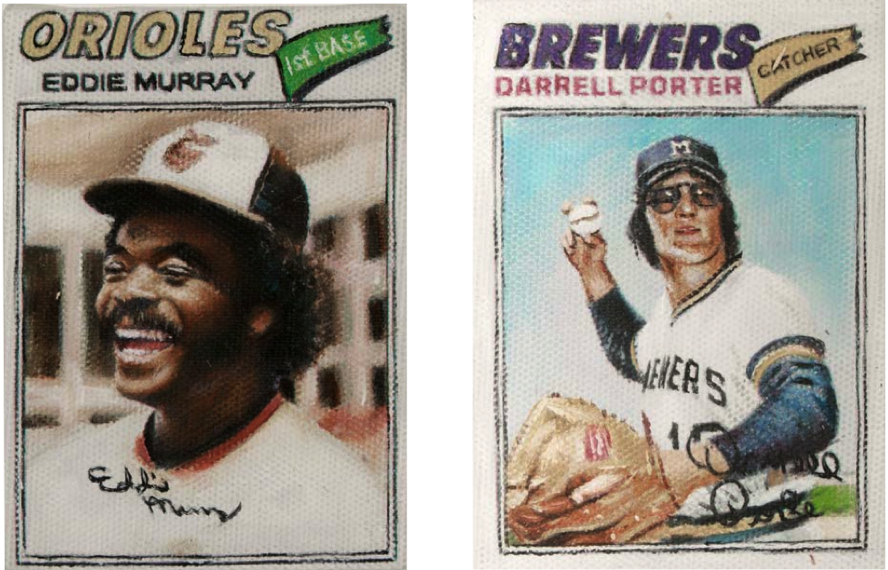 These artists share a love of a common subject and create rigorous art around this thing about which they are so passionate. So many artists today, especially coming out of art schools, have a strong theoretical disposition but have no passion with which to communicate their vision. The bland art in many galleries is a result. Artists with the intellect to understand truths about our times are wise to address these things in a subject close to their heart. Pat Riot, Bill Barminski and Jim Thompson do exactly this to great results.

"Out of Left Field" continues at the Known Gallery thru June 8. More information is at the gallery's website (LINK). "1977" closed in early May but is documented on the Charlie James Gallery website (LINK).