"This will not stand." President George H. W. Bush

Yesterday was already a bad day for baseball. Ken Griffey, Jr., whose sweet swing, acrobatic catches and low maintenance persona had lit up baseball for over 20 years, announced his retirement.

Our spirits brightened when we heard that Armando Galarraga was pitching a perfect game. Thanks to MLB.com, we crowded around the computer screen. Three perfect games in a month after only eighteen in over a century? This is what baseball fans live for.

All seemed lost when the lead-off batter in the Ninth, Mark Grudzielanek, launched a drive into the left-center field gap. However, Tigers centerfielder Austin Jackson made an exceptional Willie Mays style catch. It seemed like destiny had Galarraga's back.

With one out to go, Indian Jason Donald hit a ball that Tigers first baseman Miguel Cabrera had to field. Galarraga rushed over and caught Cabrera's throw with Donald still a full stride from the bag.

Galarraga had his perfect game. His face lit up, but soon turned to bemusement when he saw that umpire Jim Joyce had wrongly called Donald safe. Joy turned to despondency. Before Galarraga quickly retired Trevor Crowe to end the game, everyone watching on television, computers or cell phones knew that Joyce's call had been egregiously wrong. "I've never been so unhappy after a Tiger win," the Detroit announcer said. 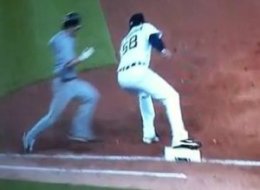 It is incredible that in 2010, when I could see the replay in my San Francisco office, no one in the Detroit ballpark could look at the recording and make things right.

The reasons given against instant replay are nonsense.

Too many stoppages? Are you kidding? This is baseball, where they take a minute for the batter to scratch his nuts. A well managed program, where each manager had limited challenges or even just at the umpire's discretion, would not appreciably slow the game and would add immeasurably to its integrity. Knowing baseball, they would sell an extra commercial to pass the time.

This morning, Jon Miller offered the old reason that television coverage is different in each ball park. First of all, not really. Most games are telecast nowadays (even in Oakland) and that means several cameras. Anyway, if there is not clear evidence to overturn a call, then it stands. I am not saying all bad calls will be eliminated, just many of them.

Fortunately, baseball has landed jelly side up. It can make this right by reversing the call and declaring this to be a perfect game, as it was. If the correct call had been made, the game would have been over. The call did not change the result, only a few statistics. Donald would lose his bogus hit and Crowe's out would also go. Cleveland would still lose the game, as usual.

There is no good reason not to do this. Sure, it has not been done before. So what? Get this right now and then put in a sensible replay system.

No more Galarragas being cheated. No more Joyces living their lives like Ralph Branca. Welcome to the twenty first century.