At my first doctor appointment, my OBGYN brought up the topic and initially, my husband and I thought it was a no-brainer. However, as time progressed, I became curious and slightly skeptical. I think this is because such informative content is not readily available for consumers to read. Either the information is difficult to sift through from studies or has a bias potential because it comes from private banking entities. I thought it sounded like a gimmick, or worse, a process where the doctor gets a "kick back" by recommending a service. Thankfully, this was not the case with respect to my doctor, but it sparked my interest on the topic generally. I realized I didn't even know the basic facts about cord blood banking, so I decided to conduct further research.

• The component of the umbilical cord blood that is preserved are the stem cells. Stem cells are unspecialized cells that form all the tissue and organ cells of the body. They can actually be used to replace other cells in the body that are abnormal or that have been destroyed by disease.

Private banks charge an initial fee for collection, a fee for processing and a yearly maintenance fee to preserve the cord blood for use by the specific donee.

Public banks do not charge for collection, but they also do not reserve the blood collected for any specific donor. This means the donations are available to the general public.

Direct-donation banks collect cord blood without charging fees as well. Usually, they accept family-specific donations to reserve for the family, which is important for when for a family whose infant has a sibling with a disease that may be treated with umbilical cord blood stem cells.

• Once cord blood is saved, it is usually accessible for use pretty quickly (~ couple weeks).

• The typical volume of cord blood collected is 50-100mL and that amount should provide dose for a child or small adult.

• If you bank cord blood from one child, it could potentially be used for any of that child's siblings (assuming there is a positive genetic match).

• Leukemia, Lymphoma and Myeloma are three diseases that are commonly treated with stem cells, however stem cells have also been used to treat blood disorders, congenital metabolic disorders, and immunodeficiencies.

• Cord blood collection is a low risk procedure for both mother and child and there is little risk for transmission of infection.

Despite the advantages, cord blood banking also has some drawbacks to consider:

• Cord blood collection includes limited cell doses (due to the small volume of cord blood) and quality control (issues due to the required storage).

Also, through my research, I found that I was not the first person to worry that cord blood banking was being "sold" to me. In a Journal of Perinatal Education review by Renece Waller-Wise, the author notes that "[t]he information available for nurses and childbirth educators often comes from private cord blood banks or their employees, thus introducing the chance of bias."

Despite the drawbacks, however, the benefits could obviously outweigh the burdens if your child or even family member ends up benefitting from cord blood. 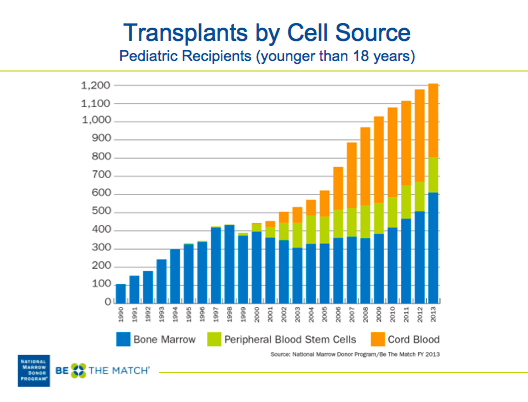 As noted in a WebMD article, "Waiting until about two minutes after birth to clamp the umbilical cord allows more blood to pass from the mother's placenta to the baby, which lowers the risk of iron deficiency during infancy, previous research has found." The article addresses that by waiting to clamp the umbilical cord, there is a potential benefit to the baby with respect to iron deficiency. The parents would delay the cord clamping and then could proceed with banking the the cord blood and/or placenta blood.

So what does this all really mean?

Dr. Anthony Rossi, a dermatologist affiliated with Memorial Sloan Kettering Cancer Center, suggests that unless there is a sibling with an illness mentioned above or a strong family history of various blood cancers, there may not be a necessity for the family to bank the cord blood--though it really is a personal choice. However, given that Leukemia is the most common type of cancer in children and adolescents younger than 20 years, (~ 26.7 percent of all cases) banking the blood could save lives. While the option to private bank does cost upwards of $10,000 for the initial collection and at least 25 years storage maintenance, the option to public bank is strictly altruistic, wouldn't cost you anything to donate and could help save another child's life.

Additional Research
So far, LifeBankUSA is the only company that offers parents the option to bank cord blood and placental blood. Placental blood is not used alone, but rather in conjunction with cord blood, as a supplement during a transplant in case there's isn't enough volume of cord blood. In addition, they also provide an option of tissue banking -- from the placenta. While the effectiveness of the mesenchymal cells is in early research stages, at this time there are no approved uses for stem cells obtained from placenta tissue.

After reviewing all the facts, we plan to bank the cord blood and the placental blood primarily because the blood could be used for a sibling or other familial relatives. So yes, it could save my sister's life or my brother's life down the line and you just never know.

More:
placentaresearchorgan transplantleukemiablood cancer
Newsletter Sign Up
Raise the kind of person you'd like to know
Subscribe to our parenting newsletter.
Successfully Subscribed!
Realness delivered to your inbox

I am a Registered Dietitian, Certified Fitness Professional, and a Prenatal/ Postnatal Exercise Specialist