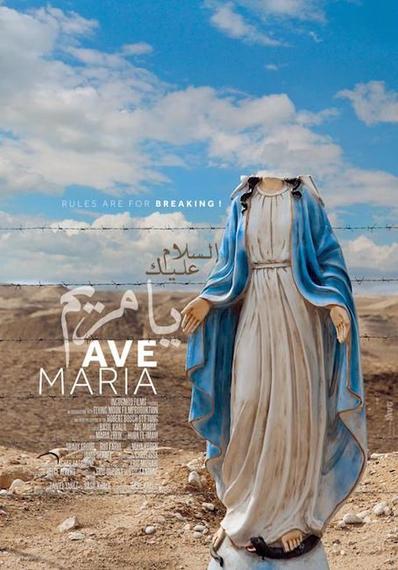 What would happen if the Israelis and Palestinians really needed each other? How would that change the world?

Well, I'm cheating a bit here, those are not really the questions that Basil Khalil asks through his charming, funny, beautifully made short film Ave Maria. A short film with a hefty presence in Cannes this year, where it premiered in Competition.

Khalil's film doesn't deal with the Netanyahu and Hamas of the conflict, instead choosing the human side of the struggle. When a very small group of Palestinian Carmelite nuns and a family of Jewish settlers "collide" together through a car crash outside the convent, they then need each others' cooperation to get away from one another as soon as possible. That's the premise of a film that -- along with the best poster in Cannes, designed by Maher Diab -- definitely conquered my heart.

This weekend, Ave Maria screens on June 21st at the Palm Springs International Shortfest in California, and on July 7th at the Festival du film court en plein air de Grenoble, while awaiting confirmation of an Italian screening later in the summer.

I caught up with Khalil in Cannes and his wit, charm and intelligence are the stuff my interview dreams are made of.

How did you come up with the idea for your film, was there a lightbulb moment?

Basil Khalil: The idea was, I come from Nazareth and there is a convent there of Carmelite nuns who live in a massive fortress with nine-meter-high walls. There are only five nuns in a building that fits two hundred. And they don't talk, only for one hour a day, and each year they vote for one nun to do their shopping, the only one who can exit the building. That struck my imagination, what do they do behind closed doors, what do they talk about when they can talk, what are these rules that they chose, to stay silent? And on the other hand you have the Israelis who are loud, squabbling with each other and they have their rules of Sabbath. And the rules are conflicting. They help each other not because they've become friends but because they can't stand each other. And the only way they can get rid of each other is by helping the other. The nuns want to go back to their silence and the Israelis to their Kosher home.

Can we make your film a little bit political, by adding another layer to it? Like the Palestinians and the Israelis, can they help each other by finding a way to avoid each other?

They are not equal these people so it's hard to say if they can cooperate. There is no cooperation when you're under occupation and one is the occupier. You don't meet on the same level.

My film is also about the rules and the settlers believe that the rules of God gave them this land and it's their duty to occupy it. Because God is on their side. Even though the Bible was written 3,000 years ago by another human channeling that message. So question your rules. People in the Middle East, particularly in Israel and Palestine, they are born into a religion, they don't choose. You're instantly given sides, but what you do choose is the level of extremism of that side. So when do you realize that you've not chosen who you are, but only the extreme? If we are born Israeli or Palestinian that doesn't make us enemies. But if you chose to adopt a doctrine that you have a right to take this land and take it, by hook and by crook, that's a decision you should question. The same about the life of silence of the nuns, how is that really going to help the world?

Is cinema a way to create a discussion? 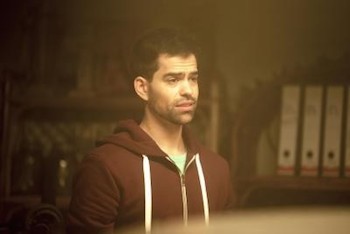 Khalil: Absolutely, because when people live in a bubble they don't get a chance to see the other side. People see the world through the news, which in turn have their own agenda. And unfortunately extremism sells. Bland, normal, friendly people don't sell advertising space. Cinema is the only outlet where people, I wouldn't say without an agenda, but filmmakers whose only agenda is to get their truth out and are dying to tell their stories, can show for example Palestinians as human beings, with all their faults.

When you show this film what do you hope people will walk away with from it?

Khalil: So many messages I want people to walk away with, where do we start?! I want them to know there are Palestinian Christians, there are Palestinian nuns and they are as quirky and weird and boring as anyone else. My first message of the film is "question the rules you've chosen." My world view may not be right if it's infringing on some else's rights. Religion, if you believe in it, and you believe it's good for you, go for it. But don't believe at the expense of someone else.

What is your own background?

Khalil: My Dad is Palestinian, my Mum's English, I was brought up in Nazareth and studied in Scotland. And then I worked in television in London for five years. I also worked on Jamie Oliver's show. He used to feed us on set, such a great guy! I moved to Italy then Spain to work on my script. It's difficult to live in London without working constantly to pay the rent.

Are you a spiritual person?

What is the first film you remember watching?

Khalil: We weren't allowed to watch films as kids. We read books and my mom read us Winnie the Pooh, doing all the voices. Once in a while, we'd watch a film like Lawrence of Arabia or The Ten Commandments or Mary Poppins and The Sound of Music.

And finally, three words that describe you?

Khalil: It's difficult! Punctual, organized, you know, the good side of OCD.

Images courtesy of the filmmaker and Mad Solutions.