After nearly a full season, a star basketball player finally got to be who he really is: Guilherme Carbagiale Fuck.

Medicine Hat College in Alberta, Canada, gave the go-ahead to local media to include the player's four-letter last name for this month's Canadian Collegiate Athletic Association tournament. Before that he was just called Guilherme Carbagiale.

"I don't know if it was ever an issue for he or I," Medicine Hat coach Craig Price told The Huffington Post. "It was more for the school and its image. ... For us it's just a shoulder shrug."

But the player told the CBC that he had enough of hiding his surname, which he said is German in origin. "I'm proud of it," he said. "Doesn't matter if it means something bad."

According to the news service, the 6-foot-6 Brazilian player pronounces it "Foo-key."

Give all the newspaper awards to @MedicineHatNews for this. pic.twitter.com/VoW97Zp2lU

The basketball player competed two years at Northwest College in Powell, Wyoming, with the web press guide listing him only by his first and middle name. He returned to Brazil to teach for a year and landed at Medicine Hat, Price said.

By any measure, the player is making a name for himself. He averaged a team-leading 18.3 points and 10.1 rebounds a game. He earned all-Canadian status, and the team finished seventh in the Canadian tournament.

And now moving forward people will know who he is.

"I would always rather use my last-last name," he told the Medicine Hat News.

Here he is (No. 14) with his Rattlers teammates: 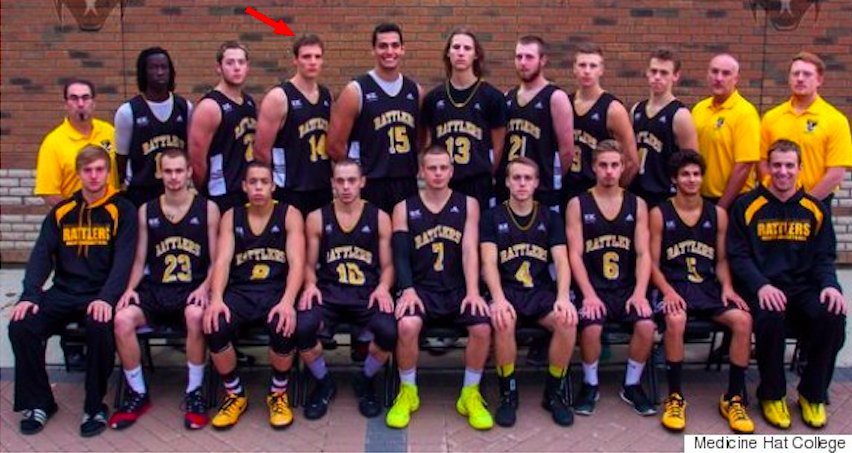 Basketball Player's Name Is Spelled Like The F-Word, And He's Proud Of It
Amazing Sports Photos

1 / 175
Brazil WCup Top Five Highlights
FILE - In this June 13, 2014 file photo, Netherlands' Robin van Persie heads the ball to score during the group B World Cup soccer match between Spain and the Netherlands at the Arena Ponte Nova in Salvador, Brazil. Robin van Persieâs diving header that foretold the demise of reigning world champion Spain was spectacular. Like Flipper catching fish, he launched himself horizontally into the air to get his head to a long pass from left back Daley Blind, sending the ball arching over stranded Spain goalkeeper and captain, Iker Casillas.(AP Photo/Christophe Ena, File)
ASSOCIATED PRESS