Allow me to introduce one of the greatest ball handlers of all time. His name is God. God Shammgod (say it in your James Bond voice). Shammgod grew up in Harlem, New York, and attended La Salle Academy. He was one of McDonald's All-American players in 1995 and attended Providence College in Rhode Island. The rest is history. We will let Shammgod himself tell the story. 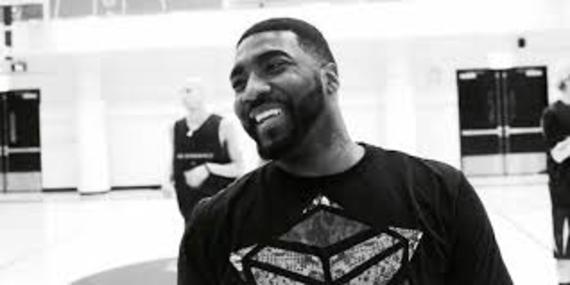 Karim Orange: To this day, NBA luminaries say that you had one of the best handlers they've ever seen. When did you first unleash your signature move "The Shammgod"?

God Shammgod: The first time people saw me do it was in college against Arizona during the NCAA tournament. I did not personally name the move 'The Shammgod'. It was just something I did. It wasn't until I started hearing other people call it that, that I realized 'oh wow, this is a thing'. After a few years, the move took on a life of its own.

K.O: After a long run playing basketball overseas, you decided to go back to Providence and get your degree. What prompted that decision?

G.S: I sustained an injury while playing in China and the Friars athletic director Bob Driscoll encouraged me to rehabilitate in Rhode Island and take classes. Getting my degree was something I promised my mother I would do, so the timing was perfect.

K.O: You were also an undergraduate assistant coach for the men's basketball team and worked a lot with Providence superstars like Kris Dunn and Bryce Cotton. What was your crossover to the coaching experience like?

G.S: It was not necessarily a crossover but more of a progression. I've always been involved with teaching, coaching, and sharing my dribbling techniques. From kids in my neighborhood or through basketball camps etc. When Kobe Bryant and I were in the ABCD summer camp together, I showed him dribbling techniques. It's just who I am.

K.O: It looks like the progression has continued. Congratulations on your position with the Dallas Mavericks as a player development coach. How are you enjoying this?

G.S: Again for me it's all about progression, and I feel very blessed to be here. If the next stage of this progression is a head coach someplace, that's great. I just put 100 percent effort and focus on the job and task at hand, which right now is the Dallas Mavericks. As long as I can continue to give back to a sport I love so much, I am humble.

K.O: The streets are buzzing right now, talking about the incredible 'Shammgod' move that Russell Westbrook pulled against the Phoenix Suns a few weeks back. You now have a whole new generation that knows what 'The Shammgod' is. How does this make you feel?
G.S: I think it's amazing that the move has transcended generations. Russell Westbrook is such a quintessential player right now, so I'm very honored to see him crushing it. That move against the Suns was legendary. I was honored to, in some way, be a part of that. Much respect.

K.O: I know everyone does 'The Shammgod' move differently and to their own advantage. Who, in your opinion, is representing it best right now?

G.S: Kyrie Irving from the Cleveland Cavaliers and Chris Paul of the Los Angeles Clippers.

K.O That's easier said than done, but when you watch it, it's very orchestrated. Please see the video .

K.O: So what are some of your off-the-court endeavors in the off season for 2017?
G.S: I would like to focus on training camps, teaching my dribbling technique 'The Shammgod.' I love to teach on all levels. This year, I'm expanding my teaching to include trainers and coaches worldwide, especially in countries I've played in such as China, Kuwait, and Saudi Arabia. So all of you trainers and coaches, holler at me.

K:O: I also heard that you are transitioning into a more plant-based diet. Please elaborate on this.

G.S: I think it's basically a healthier lifestyle, especially as we age. After hearing John Salley talk about the lifestyle, I became intrigued. He's always speaking about how switching his diet made him more effective on and off the court. We put some much pressure on our bodies as athletes. It's important that we have an understanding of what we are putting into it. Even Mike Tyson has embraced a plant-based diet. Once I saw the movie Forks Over Knives, I knew I was ready to make a change. I'm taking it slow, and am very comfortable in the process. Right now, I'm focusing on education and making sure my body gets all the nutrients it needs. I also like food that tastes good, so I'm experimenting with products and food combining.

K.O: Sounds like the next article is a trip to your kitchen to see what your cooking (lol).
G.S: Sound good. (laughs)

K.O: In closing, I would like to share my favorite Twitter comment about you. It was "If you do a 'Shammgod', you're immediately in the hall of fame." yours?
G.S: Mine was: "Ten years ago, we had Bob Hope, Johnny Cash, Steve Jobs and God Shammgod. Now we have no hope, no cash, no jobs, but God's not dead."