Usually ice cream novelties on a mainstream scale come from those two guys in Vermont, Ben and Jerry. However, long-time ice cream retailer Baskin Robbins is in the game now, not with a 32nd flavor, but with a new way to eat a frozen treat. Their new Waffle Chip Dippers have been promoted to be "like nachos, only cooler," and they've been creating quite the buzz from people who obviously like both ice cream and the action of dunking chips into a dip. Here's how it rates:

The Claims: Baskin Robbins' Waffle Chip Dippers consist of a plastic bowl filled with four waffle and brownie chips, and a portion of soft serve vanilla ice cream, topped with chocolate sauce, M&Ms and crumbled Snickers. It's available through the end of the month for $2.99. Calories: 500. 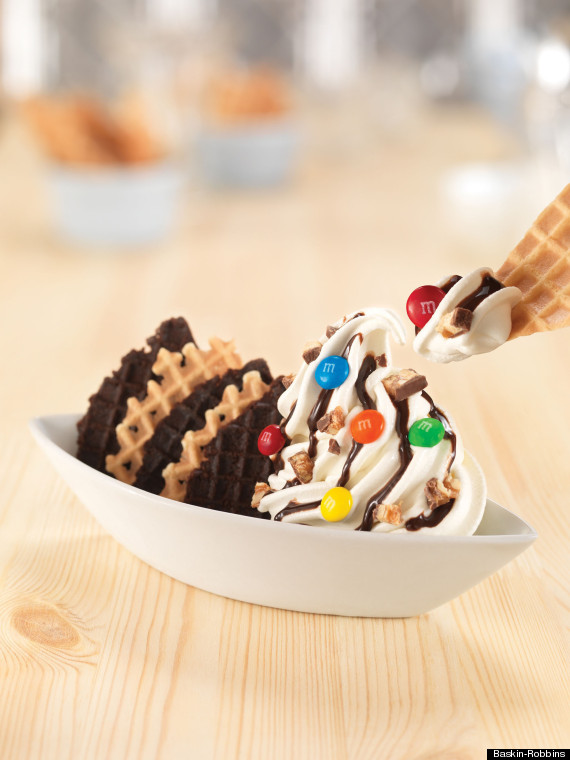 The Verdict: D. If you've seen the promotional image of the Waffle Chip Dippers, you'll see that this dish has everything going for it. It's a waffle cone -- already broken down into convenient triangular-shaped chips -- next to a perfect serving of vanilla soft serve, topped with chocolate and candy. The photo shows off quite a feat; if you've ever dispensed your own soft serve, you know that getting the perfectly-shaped serving is no easy task, with the extrusion of ice cream pouring down into the dish like it has a mind of its own.

The reality of Baskin Robbins' new novelty treat is that it's nothing like the picture on the poster, just like so many items in the fast food world (see photos below). They must have shot it really quick, or in a freezer room, because soft serve melts really fast at room temperature. Within just a few minutes, the ice cream melts down in a goopy mess, and you have a pool of creaminess with candy floating around. With that said, the Waffle Chip Dippers are sort of like getting nachos from 7-Eleven: you have a plastic container, filled with chips, and on the side, there's something creamy to dip them in. The difference, other than the obvious ones, is that at least the 7-Eleven nachos were meant to be eaten that way.

With 31 flavors to choose from, it's a shame that Baskin Robbins only serves this dish with just one standard vanilla flavor. Perhaps if they served the dipping chips with something more substantial -- i.e. with your choice of one of their many hard flavors -- they'd have something that wouldn't melt into mediocrity in a few minutes. If you're still keen on trying it yourself, make sure you eat it fast -- or get yourself inside a freezer room.