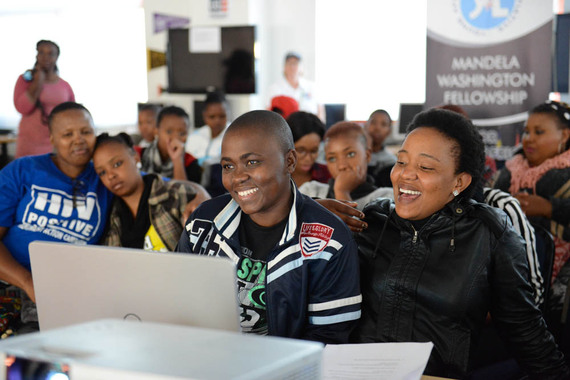 I am sitting in a room in the State Library in Maseru, Lesotho, with about 30 other young people. We are Skyping with acclaimed South African photographer Zanele Muholi, who is jet-lagged and speaking to us from Paris. She is more than 13,000 miles away, but it feels as if she is right here, with us in the room. She is making us all laugh as she tells us about her most recent exhibition at the Brooklyn Museum in New York.

"For the first time in history, they have images of black lesbians and trans-people on their walls. Never before have they had a black lesbian disorganising their space like that! My work is to mainstream our issues, to give visibility to black lesbians in South Africa."

It is Saturday 23 May. Our conversation with Muholi is part of an all-day event organised by Matrix Support Group, the only organisation in Lesotho working to promote the rights of LGBTI people in the country. Founded in 2008, Matrix has in just a few years made significant headway in promoting an awareness of LGBTI issues in a country that is still largely conservative. Last weekend, the organisation successfully held the third pride march in Lesotho's history.

Today's event is being supported by the U.S. Embassy in Maseru, in conjunction with the Young African Leaders Initiative (YALI). The majority of the people in the room are members of Matrix, and in some way identify as part of the LGBTI spectrum. Several form part of Matrix's core leadership team.

The aim of the event is to provide insights into the work that is being done by LGBTI activists in countries around the world. Six Skype calls have been arranged and, during the course of the day, a number of interesting themes and ideas emerge, as well as vital words of encouragement and support.

Muholi is not the only speaker to highlight the importance of visibility. Our first Skype call was with another South African activist, Germaine de Larch, who also uses photography as a means of documenting the lives of transgender people in South Africa.

"We're not seen as human or as real, which makes it easier to discriminate against us. Through my photos, I show that we exist, we have lives, we're not going anywhere."

De Larch's most powerful statement about visibility is one is that is echoed several times today: "simply being who you are, existing as an LGBTI person, is a form of activism."

Later, we talk to Jamaican gay rights activist Maurice Tomlinson, who Skypes us from an airport in Barbados. The occasional boarding call announcement interrupts our conversation. Tomlinson is involved in a wide variety of LGBTI activism in the Caribbean, including sensitivity training with policemen, the establishment of a shelter for homeless LGBTI youth, and the challenging of anti-gay legislation, most notably Jamaica's anti-sodomy law.

Tomlinson's work and experiences resonate strongly with the people in the room. Lesotho also has anti-sodomy legislation, an import of British colonialism. In our case, however, in contrast to Jamaica, the law has never been used to prosecute consensual male same-sex sexual activity. Nonetheless, Matrix's long-term goal is to pressure the government of Lesotho to revise the law. But how to change a country's law when the majority of its citizens hold homophobic views?

"Changing the law won't change the hearts of the people," says Tomlinson, "but you can work on both at the same time. One doesn't have to follow the other."

Tomlinson's work with religious groups is also very relevant to our situation. Lesotho is largely Christian, and homophobic views and attitudes often stem from religious conservatism. Tomlinson's husband, Tom Decker, is an Anglican priest, and works with him to deliver workshops and trainings.

"As a priest, my husband can tell people: 'the greatest commandment is love.' You have to embarrass them into remembering that fact. Find influential, tolerant religious voices in your churches, and amplify them."

Aija Salo, general secretary of Seta, Finland's biggest LGBTI rights organisation, reminds us that any kind of change takes time. 20,000 people attended Helsinki's 2014 pride march. Fifteen years ago, only 300 attended, a number not so different from our recent march here in Maseru.

"Change is possible, it's not so long ago that we were struggling. Recently, we established a support group for LGBTI family members in Rovaniemi, in the north of the country. Only two parents showed up to the first meeting, but it was a start. Don't get discouraged. These things take time."

Tiffany Kagure Mugo, co-founder of the website HOLAAfrica, offers similar encouragement, as well as some solid words of advice for those who do activism work.

"If you're having a bad day, know that it will get better. And be sure to never take yourself too seriously. If you do, you will focus only on the shine and the accolades, and will lose contact with the work you do."

Our final Skype call is with North Carolina-based activist and musician Laila Nur, whose charm and good looks make her an instant hit with the female members of the audience. "There is so much fucked up in the world," she says simply. "As long as you are able to do something about it, you should."

The energy in the room at the end of the day is buoyant. People are smiling and laughing. Several linger behind to discuss the incredible conversations that we have had. We have spent the day in a small room in a landlocked country in Southern Africa, but it feels as if we have just taken a trip around the globe. Many of today's speakers have promised to come and visit and to offer training and support in various ways. We have been reminded that we are truly not alone. As Maurice Tomlinson said to us earlier today: "We are on a liberation train for LGBTI rights, and although there will be some stops and some jerks and some speed humps, we are moving forward."