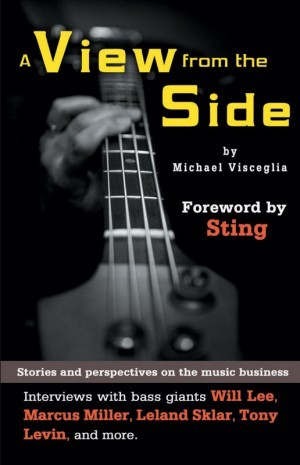 "You ask the average person what a bass is, or what a bass sounds like, and most of the time, they don't know. But remove the bass from any piece of music and suddenly it becomes the largest missing piece in the world! Whoa, fifty percent of the music just went away with one instrument! It is an instrument that is much more conspicuous by its absence than by its presence..."

A few weeks ago I interviewed Rock 'n' Roll Hall of Famer Dennis Dunaway upon the release of his memoire Snakes! Guillotines! Electric Chairs! My Adventures in the Alice Cooper Group - and among the many profound statements he imparted to me was "rock 'n' roll ...if it doesn't kill ya, it will keep you forever young." Which brings me directly to Michael Visceglia, an ageless cat who has plied his oft anonymous yet essential craft on recorded works and concert performances with such artists as Suzanne Vega, John Cale, Jackson Browne, Bruce Springsteen, Bette Midler, Phoebe Snow, and Christopher Cross, to reference a very few.

Shortly following his latest performance from the orchestra pit of Cyndi Lauper and Harvey Fierstein's Tony Award Winning Broadway musical Kinky Boots on a warm spring evening, Mr. Visceglia is sitting across the table from me in one of those Italian restaurants that Billy Joel once portrayed in song to discuss his new book, which, as the most mesmeric works often are, is borne of "a labor of love...it was a completely non- commercial idea at first!"

As for the play, which was cited for Best Musical and Best Original Score, Mike's grooves are worth the price of admission alone - but go see the production anyway. "For a Tuesday night" he enthuses, "this was a fantastic gig...the audience was really into it...everything clicked."

In short, Visceglia's terrific tome A View From the Side, negotiates many themes which may appear disparate at first, but they all resolve in the end - much like an effective bass-line that grabs an audience - even if they cannot fathom the source of the rhythm, harmony, and rumble by no fault of their own. His chronicles of tours with Suzanne Vega, Velvet Underground icon John Cale, the story of the mysterious Miss M as exposed in "The Fan," and his paean to a friend and mentor entitled "The Many Lives of Jan Arnet," are the stuff of Hitchcock films. And that's just the first few chapters.

"The idea came from my experiences on the road..." exclaims Michael, "hey if this happened to me, there's got to be a lot of other musicians who have really interesting things to say...but I kept it in the bass world, because I'm a bass player." True that, but few scribes can capture the range of emotions that a bass player experiences given the tangible power of the instrument and the role these dedicated yet mostly unknown practitioners play in the music that touches the lives of millions.

"But, you don't have to be a muso or a bass player to appreciate it..." emphasizes the bassist. "I want it to be for anybody who has an interest in the music business and beyond. There is value in these human interest stories. I stayed away from the usual topics of what amplifier or what instrument someone used on a record or a tour. I delved into the thought process, the creative process, how these players keep going in this ever changing business. How do they traverse all the different styles? It's something everyone can relate to."

Aside from the sometimes torrid yet always touching tales of his personal experiences, Michael's candid conversations with bassists Will Lee (Late Show with David Letterman), Tony Levin (Peter Gabriel, King Crimson, John Lennon), Marcus Miller, Colin Moulding (XTC), and the late studio legend Duck Dunn, among others, makes known much about the character of a bass player which will enlighten fans and aspiring musicians alike.

Visceglia's in-depth exchange with James Taylor bassist Leland Sklar, another studio giant, emerges as a pop music history lesson hitherto untold- warts and all. "My goal was to get players from different parts of the country, from different genres...with Lee Sklar, you get a look through the window of how you can be with someone for such a long time and build a career for a star, and you think you are creating an everlasting bond with someone...but you're really not. And I've found that out a few times myself."

Visceglia also shares his expertise on the currently unhinged state of the music business, offering insightful analysis on the death of the record industry; the American Idol-ization of the pop music spectrum, along with practical advice on how to forge a career as a working musician regardless of the seismic shifts in how music is delivered, consumed, and valued by the masses. However unlike many veteran players who have seen it all and continue to pine for days past, Michael waxes wise and most positive.

"One thing that an audience always relates to, more than anything else in the world, is authenticity. Of course, there are a lot of fabricated stars out there...that's fine. And it's nothing new. But that doesn't mean that every artist out there is defined by that. To experience the connection that happens between musicians, a song, a voice, an instrument, and an audience...all the people who are in it for the right reasons, and are committed to the art - we will always find an outlet for it. The other stuff, well, that's just white noise in the background..."

With a Fender bass fawning forward by former teacher Gordon Sumner, better known by his stage name Sting - and moving tributes to his late father, without whom Michael would have never picked up a bass to embark on his incredible life journey, A View From the Side is among the most realistic, accurate and useful collection of essays for bass players, musicians, and fans that I've come across in many years. I'm not at all surprised that it was written by a bass player.

"The nature of the bass is supportive. It's the only instrument that exists in three worlds - the rhythmic, the harmonic, and melodic worlds. In order to have longevity in this business, from my own experiences and from everybody I talked with, you have to be highly committed, highly flexible - you cannot have a rigid outlook on your life and the way you think things are supposed to be...because the script isn't written that way!"

Michael Visceglia's A View From the Side, published by Wizdom Media LLC and distributed by Alfred Music is out now. 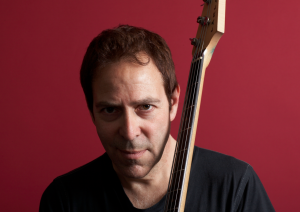