NEW YORK -- A projected image of baby bats swaddled in blankets earned a collective "awww" from the audience. It apparently came as a welcome reprieve from videos that featured bats being butchered for food and defecating into a popular drink, and stories of how bats may spread lethal disease.

"Bats get a bad rap," said Dr. Jon Epstein, a wildlife veterinarian at EcoHealth Alliance, during the organization's event Wednesday night in Manhattan.

Many of us don't think of bats as cute. The creatures' dark and jagged silhouettes against the night sky may rather trigger gasps and dashes indoors. But as Epstein and his colleagues highlighted, human misconceptions of bats and neglect for the animal's health and habitats may be resulting in serious consequences for our own well-being -- from increased use of toxic pesticides to greater floods to rising risks of pandemic disease.

With more than 1,200 different species, bats make up about a quarter of all the Earth's mammals. Their numbers, however, are declining due to threats that include deforestation, disease and hunting. Meanwhile, many people are actually seeing more bats as changes in land use, agriculture, food industry practices, climate change and human population growth actually bring the remaining animals -- and their viruses -- closer to us.

"They live everywhere we do," said Epstein. "So we end up bumping up against bats quite a lot."

He shared a video during his presentation of a woman in a southern Chinese market slaughtering a bat, bagging it for a customer and then wiping her hands on a dirty rag. He also showed footage of a bat urinating and defecating over a sap collection pot in Bangladesh. The sweet liquid is a local delicacy.

"It's very easy to see how pathogens can jump from animals to humans," said Epstein, whose research sends him around the world on the hunt for the next potentially pandemic-producing virus in wildlife before it jumps to humans.

At the end of the film "Contagion," a short sequence of clips portrays a scenario that launches a relatively realistic Hollywood pandemic: A bulldozer clears a patch of trees for a new piggery, into which a displaced and diseased bat drops a chunk of banana, which is gobbled by a pig that later lands in the hands of a chef. The chef fails to wash his hands before shaking hands with Gwyneth Paltrow's character -- who dies a few days later after having shared the bat-borne virus with others.

"These viruses don't seek out humans," David Quammen, author of the book Spillover, noted during Wednesday's event. "If they don't have opportunity, they don't get into humans."

All of these situations, Epstein added, are manmade. He offered some manmade solutions.

Creating a buffer between livestock and orchards, a magnet for fruit-loving and increasingly displaced bats, can fend off disease. Epstein also described his work in communities to install bamboo skirts over sap collections, along with his efforts to build local awareness of the disease dangers and urge simple preventative tools such as hand-washing.

An average of about five new infectious diseases emerge every year, according to a study based on data from 1940 to 2004. Experts say roughly 75 percent of newly emerging infectious diseases originate in animals. They also say spillovers usually occur in developing countries, where wildlife comes into increasing contact with growing populations.

Bats are consistently a leading suspect, already blamed for spawning Ebola, Nipah and Hendra viruses. Turns out, bats often carry these viruses without consequence to themselves. Yet the same viruses can prove deadly to another species, including humans. 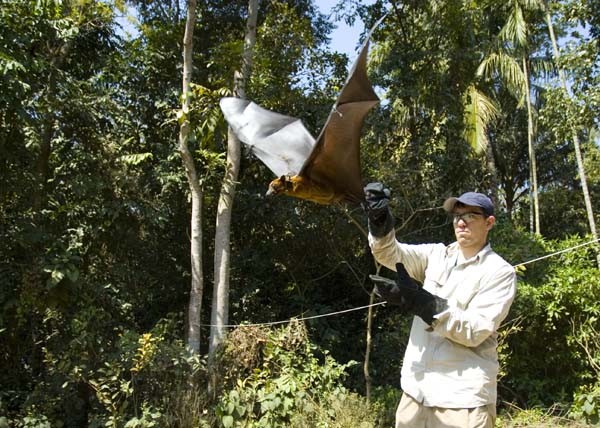 Epstein noted that researchers are finding evidence of ancient lineages of influenza in bats. "And we know they have a load of coronaviruses," said Epstein. Through the U.S. Agency for International Development's Emerging Pandemic Threats Program, as well as a global bat viral diversity project funded by the National Institutes of Health, Epstein's team has discovered more than 250 novel coronaviruses several species of bats in several countries, including Mexico and Thailand.

A new strain of avian flu, H7N9, is taking lives across Asia. A new coronavirus, Middle East Respiratory Syndrome, or MERS, has killed 31 of the 55 people it has reportedly infected. Margaret Chan, director-general of the World Health Organization, last month warned that MERS is a "threat to the entire world."

Neither virus' origin is clear, although the odds are in favor of wildlife being responsible for MERS, William Karesh, vice president for health and policy at EcoHealth Alliance, noted in a blog at The Huffington Post on Wednesday. SARS, a close cousin of MERS, is believed to have emerged from bats.

"Roughly a billion people are infected with some type of zoonotic disease every year," Karesh wrote. He urged experts in animal science and ecology to join human health scientists working to understand and prevent the diseases.

Recognizing "One Health,"connections between the health of the environment, animals and humans, was the subject of The Huffington Post series, The Infection Loop.

While many viruses bats host don't sicken them, one fungus has arisen as a major threat to their survival: white nose syndrome can wipe out 90 percent of bats in a cave. It continues to spread and infect bat caves across the U.S. Scientists are still on the hunt for the source of the powdery white fungus that often coats the muzzles of its victims.

During his talk on Wednesday night, Karesh emphasized the importance of bat conservation.

More than 300 species of fruit also depend on bats for pollination, including mangoes, bananas and guavas. In some parts of the world, bats pollinate half of the forests.

Karesh noted the obvious risks posed by deforestation, but said that bat loss adds a more "subtle way" the planet is losing trees and biodiversity.

"We'll lose animals that are out in the daytime that we love," he added.

The potential ramifications don't end there. With less tree cover, temperature increases with climate change will be exacerbated and rainfall less readily absorbed, leading to more severe flooding. Loss of bats may also reduce scientists' chances of uncovering the mystery behind the animal's natural immunity to viruses that are lethal to us.

"We don't want to burn down the library before we've read the books," said Karesh. "We can't afford to lose those animals."

Quammen, too, spoke of the interdependence and interconnectedness between bats and humans, especially when it comes to emerging viruses. "It's their disease, our disease, the same disease," said Quammen. "We as a species are not separate from nature."