Bates Motel was always good. That was never a matter of question. Season 4 however, truly shows the creators' (Kerry Ehrin and Carlton Cuse) ability of indulging the viewers further into the Bates universe and slowly paving the way to Norman Bates' inevitable fate in Psycho.

What mainly differentiates this season from the earlier ones, is the increasing gap in the Norman/Norma dysfunctional relationship. So far, we are used to seeing them quite interconnected in an unhealthy way. In this season though, with Norman swimming deeper into his own darkness, the mother and son seem more disconnected than ever.

The now very frequent blackouts from Norman's (Freddie Highmore) part aren't helping either. Norma (Vera Farmiga), in what seems like a last attempt to save her son from his own self, admits him in Pineview, a mental health facility. In any other TV show, we could all argue that this development could possibly aid Norman in healing his fragile state of mind. However, as the 1960's iconic film suggests, Norman is well on his way of acquiring a one-way ticket to murdering his mother.

Freddie Highmore as Norman Bates is terrifyingly great in this season. We have seen him as a creepy teen before but this time around, Norman is fully equipped with the eagerness to wear his "mother suit" on a regular basis. Stepping into Norma's shoes is a challenging task but Highmore manages to reinvent his character most eventfully by finding Vera Farmiga's rhythm and banter.

I always believed Norma Bates is one of the most well-written characters on television right now and season 4 further solidifies this belief. Vera Farmiga, as always, delivers a multi-dimensional Norma. There are times you will not like her, specially for her inability to properly take care of her sons. However, she's had a very troubled past, thus making her a perpetually relatable character.

For example, in episode 5 of season 4, Chick (Ryan Hurst) comes back to take revenge from Caleb (Kenny Johnson), Norma's brother. In a successive series of events, Norma is being brought in this mess with Chick threatening to expose her incestious relationship in exhange of Caleb's whereabouts.
Then in the following episode which aired this week, there is a shocking flashback from Norma's years with Norman's father. We are exposed to a rape scene which is not for the faint-hearted. Farmiga's performance throughout the entire episode was heartwrenching while her nervous breakdown in the final scene will be long remembered as one of the most profoundly emotional moments of the show.

Personally, I would love to hate Norma because her actions are partly to blame for Norman's rapid demise but her sharp-witted one-liners are my favorite thing about Bates Motel. "I need insurance, you have insurance, so I thought maybe you could marry me. It's not like you're doing anything else." is how Norma proposed to Alex Romero (Nestor Carbonell) in order to claim insurance for the Pineview's medical costs. It's not like you can't not love her after that.

Which brings me to this season's long-anticipated love relationship of Norma and Sheriff Romero. Crediting the creators of the show once again, I thought using the insurance claim as the device to sort of push the pair fall in love was brilliant. Sure, Alex has been smitten with Norma for quite a while so this has been a very efficient way to move things forward in the most unconventional way possible. And it works. Nestor Carbonell as Sheriff Romero brings an extra layer to his character by embracing Romero's feelings towards Norma while facing the aftermath of killing Bob Paris (Kevin Rahm), the Arcanum Club leader. The chemistry between Carbonell and Farmiga is impeccable with their on-screen moments being the highlight of every episode.

With only 4 episodes left in this season, things are only going to get worse - especially for Norma and Alex, when Norman finds out about their rushed wedding. If there are two people who have a chance in having a brighter future, it's Dylan (Max Thieriot) and Emma (Olivia Cooke) and I'm sincerely rooting for them to get the hell out of White Pine Bay.

In light of my favorite Bates Motel season, I spoke with Freddie Highmore who has writing credits for episode 8 and Nestor Carbonell who is directing episode 7. 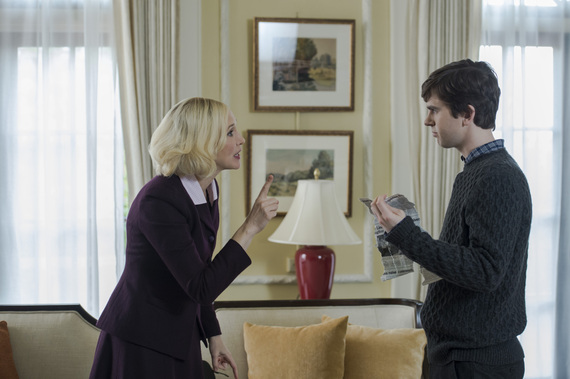 What I especially loved about your performance this season was that this time you are called to imitate Norma's aesthetic and movement. In terms of approaching that performance, what challenges did you face?

FH: Thank you. It's been fascinating getting to chronicle Norman's dissociative identity this season, and see him slip into his "mother" guise more regularly than before. Perhaps the greatest challenge was in finding truthful solutions to portraying the transitional moments, where we see Norman lose awareness of who he actually is, and then become his mother. We never wanted to rush those moments.
In terms of assuming Norma's identity, Vera was wonderfully helpful and supportive of my attempts to replicate certain things that she has so brilliantly imbued Norma with. At the same time, it was interesting to play with the idea that Norman isn't behaving exactly how Norma would in these situations. It's his version of her as she appears to him.

In this season, we see Norman being taken over by his dark side on a more frequent and intense basis compared to the first three seasons. After an entire season of playing Norman Bates, how long does it take you to come down?

FH: Surprisingly quickly, perhaps. I don't really carry too much of it off set at the end of the day; I hope I don't! I am sure seeing acting as a form of therapy isn't healthy, especially in the case of Norman, but there is something cathartic in having a good cry or a good shout.

Freddie, it must be a challenge for you as an actor to keep your audience's sympathy. After this sympathy for Norman starts to run out, why do you think the audience will keep watching?

FH: Certainly that's something we all discuss: keeping the audience on Norman's side, remaining sympathetic towards him. I think that Kerry [Ehrin] and Carlton [Cuse] have maintained that up until now by having Norman genuinely doing what he feels is good and right, and so - as his moral compass starts going astray - we feel for him, and simply wish we could help him, as opposed to attack him for it. At the same time, while there is a more manipulative side to Norman that starts to come out this season, it's not like Norman Bates being a serial killer is a long-held secret that has been sprung upon people. We've known the end from the beginning, and there's nothing wrong with a good tragedy! 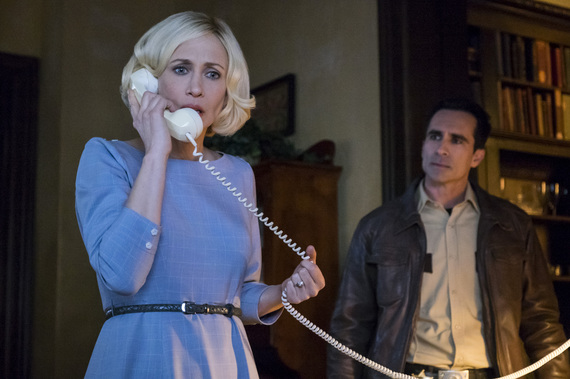 Lots of Bates Motel fans have been waiting for Norma and Alex to get together. I find it refreshing how the show has treated this relationship with such wit and spark, particularly in scenes like the ballroom dancing. Do you find it easier to explore this soft side of Alex or his colder side that we were introduced to in the beginning?

NC: Before we shot the pilot, creators Kerry Ehrin and Carlton Cuse, told me Alex and Norma would get together at some point. Getting to play an unapologetic bulldog of a sheriff for three seasons who didn't suffer fools, had a fluid moral compass and guarded his emotions like a poker hand, became that much more meaningful knowing Norma would eventually be the one to soften him. Still, it wasn't as easy as I thought it would be to completely let the character's guard down. I'd grown so accustomed to enjoying the character's darker side. And we'd only seen cracks in Alex's armor here and there, especially after he'd been drinking. So the writers cleverly had Alex and Norma drink a fair bit together at the beginning of this season to facilitate his softening up.

Are there moments where you felt like something Sheriff Romero was doing was beyond what your conception of the character was? Where he surprised you?

NC: In episode six of season three (after being threatened by Marcus Young in the hospital), Sheriff Romero gets out of his hospital bed, heads down to the underground parking, smashes Marcus' car window with his IV stand, disarms him, shoots him with his own gun, wipes Marcus' blood off the windshield with some old rags, and speeds off in Marcus' car. While Romero's violent actions were very much in character, I was surprised (in the best way possible) by the timing of that particular scene and how brazen Alex was in killing Marcus out in the open like that.

Do you ever worry about the viewer losing his or her connection to the character?

NC: The writing on Bates is so strong because it's character driven, and the characters are all rich in flaw and great misbehavior. My guess is what makes viewers connect with the central characters, is that despite how flawed they all are, each one of them is continually trying to fight the darker side within them. That they are engaged in that internal moral struggle almost gives each one of them license to trip up as much as they do.
As an actor, I can only try to live truthfully as the character under imaginary circumstances. I can't really control the viewer's connection to the character. If anything, I do my best to forget the cameras and crew (and the viewers) and, in that moment, commit myself to the character's immediate need.