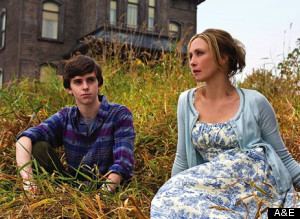 It's easy to understand the business reasons that led A&E to make "Bates Motel" (Monday, March 18 at 10 p.m. ET on A&E). In the wake of the massive success of "The Walking Dead," every TV network wants a scary-story franchise, preferably one with a readymade fan base.

It's much easier to market a TV show when the property has already had success in another arena, when it fits into an easily identified genre and when it's sure to supply lots of creepy imagery for the promotional campaign.

The problem is that everything that makes "Bates" more attractive from a marketing standpoint makes it less interesting from a dramatic perspective. The show is more hobbled by conflicting impulses than the characters at the center of it, and despite a good core cast, this strange hybrid is weighted down by the fact that we know how this story ends.

"Bates Motel" is a prequel of sorts to the classic movie "Psycho," but even there, the show wants to have it both ways. "Bates" is set in the modern era, but there's an awkward sense of indecision when it comes to tone and atmosphere: We see Norman Bates texting and hanging out at a kegger, but most of the furnishings and clothes have a buttoned-up, retro feel.

But that's not the most discordant thing about "Bates Motel" -- what's truly odd is that it's not a miniseries or a movie. The first season will be 10 episodes long, and theoretically the drama could be renewed if its ratings justify a second season. Based on its first three episodes, however, "Bates Motel" is essentially an extended answer to the question, "How did Norman Bates end up turning so, well, psycho?" The answers to that question don't vary much, and Alfred Hitchcock already gave us some fairly interesting food for thought on the subject.

Much of what made "Psycho" effective was the sense that its isolated characters were trapped in confined environments and cramped mindsets. But to fill out 10 hours, "Bates Motel" has to spend quite a bit of time expanding the world of Norman (Freddie Highmore) and his mother, Norma (Vera Farmiga). Executive producers Carlton Cuse ("Lost") and Kerry Ehrin ("Friday Night Lights") have added a roster of townsfolk that includes a gaggle of high schoolers, a wary sheriff ("Lost's" Nestor Carbonell) and his bland-at-first-glance deputy. As you might have guessed, things are not as they seem in the picture-perfect coastal town where the Bates settle (but if you want a truly atmospheric take on that same general premise, you're much better off with Sundance Channel's excellent "Top of the Lake" miniseries, which also premieres Monday).

The additions to the "Psycho" universe are understandable, in theory: Horror depends on the element of surprise, and new characters (unlike characters whose arcs are already mapped out) may be able to take part in unforeseen developments. None of the new characters are all that interesting on their own, however, and their pallor continually throws the focus back on the core Bates duo, who take over a run-down motel early in the first episode.

Highmore and Farmiga do their absolute utmost to keep things interesting, and they're reason enough to check out the show if the premise sounds interesting. But I found that their performances added to the sense of discord; the more three-dimensional they made Norma and Norman, the less I wanted the characters to travel down the path that even moderate loyalty to "Psycho" would compel them to take. It's not really possible to hope for redemption and relief for these characters -- we know where they're going, and the early episodes do little to give the impression that the Bates' ill-fated lives will head somewhere different. And the more that Highmore's essential sweetness and Farmiga's essential intelligence shone through, the less I wanted their characters to turn out to be, well...psycho.

All in all, the stories about the town feel somewhat contrived, and the lead characters' arcs feel predictable, despite the texture the actors are occasionally able to give the material.

I suppose it's possible for a modern-day high schooler to be dominated by his mother to the degree that Norman is controlled and manipulated by Norma, and I suppose it's possible for a mother to need her son's attention in a way that stops just short of being incestuous, but I don't necessarily buy this scenario with these characters in this setting and time frame. "Bates Motel" doesn't really explore the roots of the characters' toxic closeness and suffocating repression -- what are mother and son getting out of this enmeshed relationship, good and bad? The answers to that question don't get more interesting over time, and I'm not sure how these character studies will hold up over a full season of TV. Unless the show is willing to go in a much heavier direction, it's hard to see how they'll be memorable character studies at all.

Hitchcock's film explored the darkest, strangest regions of the human psyche with savage efficiency, and "Bates Motel" has some of the efficiency without much of the depth. It appears to want to stay more or less on the surface of things and to provide a certain number of scary scenes and bloody moments in every hour. There's a brisk energy to what the show does -- that can't be denied -- and the two actors at the center of it are enormously skilled.

But what I've seen of the show makes me think that it's ultimately an example of Boba Fett Syndrome: When it comes to what we know about certain characters, sometimes less is more.

Ryan McGee and I talked about "Bates Motel" and "Top of the Lake" (which stars "Mad Men's" Elisabeth Moss) in this week's Talking TV podcast, which can be found here, on iTunes and below.