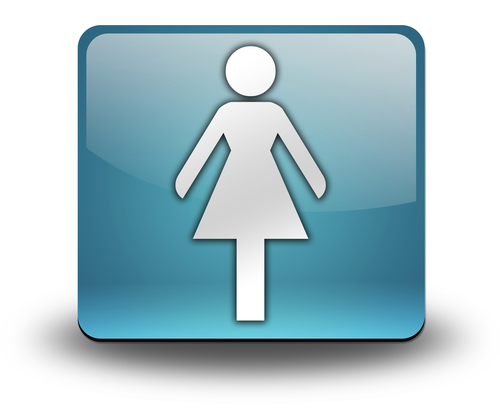 I admit I'm not the hippest chick on the block, but I don't exactly live under a rock. More like a pile of loose gravel, which likely accounts for the news of "free bleeding" just filtering through to me last week. Once I stopped gagging, I started Googling. Multiple searches produced no clear verdict on whether or not free bleeding is an actual "thing" that any women are embracing these days, but I can tell you there was zero support for it when I accidentally practiced it more than 30 years ago.

Never in my life have I felt as betrayed by my own gender as I did that scorching August afternoon in the women's room at a "festival marketplace" in Baltimore, about an hour from my home. Five months postpartum, I had been looking forward to my first child-free shopping excursion with a giddiness unmatched since my freshman year in college when I'd gotten into a bar using my roommate's baptismal certificate as I.D.

As my friend Marianne and I sat down to try on some BOGO sandals, I sensed a distinct "dampness" in the seat of my shorts, which I hoped was just perspiration from power shopping in extreme heat. When I stood up to grab another pair of sandals -- whoosh -- I felt my internal floodgates fly wide open, and I realized I was dealing with much more than a sweaty undercarriage.

"Oh, my God, I think my period has just returned," I whispered to Marianne. I hadn't had a period in 14 months, and I wasn't prepared. "Run and buy me something -- tampons, pads, a sponge mop, whatever you can find," I implored Marianne. "I'll wait in the bathroom. Please, hurry!"

Gingerly, I waddled to the bathroom to assess the damage. Someone once told me your period was your uterus weeping. Mine was bawling. Its tears had completely soaked through the crotch of my underwear and leaked onto my shorts. Frantic, I removed everything from the waist down, cleaned myself up with baby wipes and blotted my clothes as best I could with wads of toilet paper. This process put me over the typically allotted stall time, and I could see at least five pairs of women's feet outside my stall all but tapping impatiently for their turn. Where the hell was Marianne?

When she still hadn't arrived with supplies a few minutes later, I knew I'd have to make a move. I shoved two nursing pads and a purse-pack of Kleenex into my tear-stained underwear, and with shorts in hand, I exited the stall to throw myself on the mercy of the court--although when I opened the stall door, the line of ten women facing me looked more like a firing squad.

"I'm so sorry," I gushed, near tears. "I'm having a horrible feminine hygiene crisis here as you can see." I paused, expecting a chorus of "Oh, you poor thing," accompanied by multiple offers of feminine products.

Instead, however, I was met with blank stares and stone-cold silence. Hot-faced and flustered, I babbled on, "This is so embarrassing. I guess I'll have to wash out my shorts in the sink and dry them under the hand dryer. I really, really apologize."

No response. Not one sympathetic -- or even disgusted -- tongue cluck. I was in the women's room with what was clearly a woman's problem, yet I was getting absolutely no buy-in from my teammates. Apparently, women in Baltimore did not menstruate.

My cheeks flaming with humiliation, I hurried over to the end sink and began furiously scrubbing my shorts. Not since Lady MacBeth had anyone tried so desperately to erase a damned spot. No one, young or old, coming or going, spoke a word to me throughout this entire ordeal. By the time Marianne returned, I had almost begun feeling comfortable standing in a roomful of strangers in my underwear. She rounded the corner and found me holding my shorts under the dryer.

"What the hell are you doing?" she asked.

"Isn't it obvious?" I said, past the point of shame and getting closer to righteous indignation. "I'm standing here with my postpartum belly bulging out of my postpartum granny panties, drying the crotch of my shorts in front of a group of women whom I've never seen before and who, it would seem, have no uteri." I paused before adding, "Or empathy."

"Well, all righty then, that pretty much explains it," said Marianne, handing me a shopping bag full of supplies which even included a new pair of underwear.

"You know what just popped into my head?" Marianne asked as I wrapped my old underwear in toilet paper and threw them in the trash. "That Alice Cooper song, 'Only Women Bleed.'"

"And it appears I was the first to do so in Baltimore," I said, proudly throwing back my shoulders. "This will be my legacy -- She bled in Baltimore."

"Bled and shopped," added Marianne. And with that, we at last left the bathroom and headed back to the sandal sale.