It's a good time of year to reflect on our handwashing habits. Flu season is here, and enterovirus D68 has spread to all but three states in the continental U.S.

Handwashing can protect against both, says the Centers for Disease Control and Prevention (CDC). We should be doing more of it throughout the day, but it's our bathroom handwashing habits that have been carefully studied -- and they are disgusting.

The simple step is something many consider unnecessary in communal spaces, from your office restroom to bar bathrooms. Some people go so far as to turn on the sink and let the water run, so it only sounds like they're washing their hands.

When researchers hid in a public restroom in a Michigan college town, they reported that 10 percent of people didn't wash their hands after using the bathroom, and nearly one in four just rinsed with water. The average handwashing time? Six seconds, far short of the CDC's recommendation for a 20-second scrub. Men were more than twice as likely as women to leave without washing up.

"Men are less concerned about things," study author Carl P. Borchgrevink, an associate professor at Michigan State University, tells The Huffington Post. "They're not as thoughtful and they don't like to be told what to do." Men also seemed to think they were clean if they were dealing only with their genitalia. "Many men suggested that unless they had a bowel movement, there would be no need for washing their hands," Borchgrevink says.

Michael Sykes, founder of the humor site the International Center for Bathroom Etiquette, says that the act of peeing is so easy for men that it may not register as a way of spreading germs.

"Men don't have to do much more than unzip their pants to take a pee, and they might simply feel like going to the bathroom is so insignificant as to not even merit a hand washing," he writes to HuffPost in an email.

Seventy percent of people confessed to sometimes rinsing without soap, and 81 percent said they had witnessed a "non-washing event" in a public restroom within the past year, according to a 2013 survey by Bradley Corporation, which happens to be a manufacturer of bathroom products. Again, men were the grossest offenders: Only 60 percent said they always washed their hands after using a public bathroom, compared to 74 percent of women. Men were 2.5 times as likely to say they "didn't feel the need."

For those who need a refresher, here's how to wash your hands correctly: 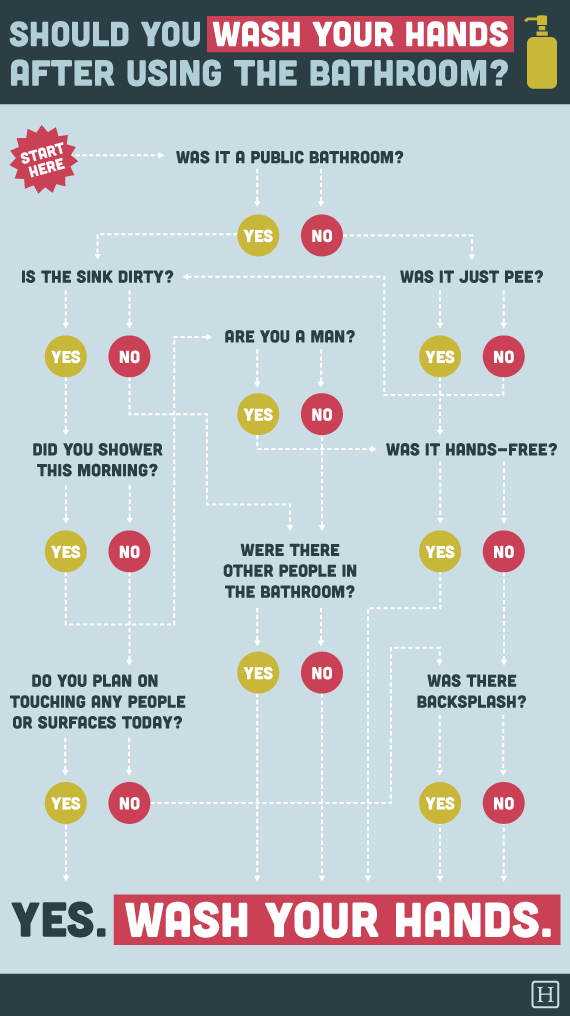 The Best Way To Wash Your Hands