Several weeks ago, in response to the anti trans "bathroom bills" popping up across the country, I posted some selfies that I took in women's bathrooms. This is the first image I posted, that went viral. 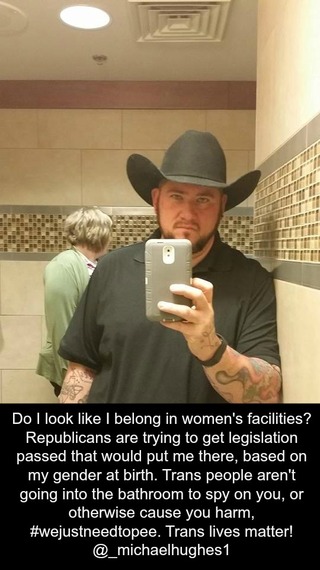 The overwhelming majority of people who responded to these photos were encouraging and supportive. What I never anticipated, however, were the negative responses from some trans people, regarding "passing." This is a topic that comes up often in conversations and it's almost always a touchy subject. Personally, I don't like the term at all. When we talk about someone passing as male, or passing as female -- we're suggesting that they are being seen as someone they are not. I don't pass as a man, I am a man. But for the sake of this piece, and understanding the issues surrounding how society perceives trans people, I will use this language.

The comments I've received, that bothered me the most, were the ones suggesting that my taking these selfies and sharing them was "unfair to the trans community", and that I was "promoting the idea that all trans people should look a certain way to access the bathroom of their choosing." And the one that was especially troublesome, "a cis ideal shouldn't be the standard for what counts as a gender." Let me say, above all else, that I do understand that some trans people have an easier time blending into society as their true gender. I also acknowledge that there is a privilege attached to not having your trans status visible to others. But like other privileges attached to who we are in this world -- it's how we use that privilege that is important.

I started using men's restrooms before I even transitioned and have had no issues. I could have continued to do so without incident. Instead, I chose to out myself publicly. Now, for the first time in nearly 20 years, I have to worry when I go to the men's room that someone will recognize me and know I am trans. I knowingly and happily made that choice for all my trans brothers and sisters who have to worry every time they use a public restroom. The conservatives responsible for these "bathroom bills" just have one picture in their head. They are primarily targeting trans women. I'm sure many of them never even considered a bearded trans man walking into the women's room. I wanted to change their paradigm. I wanted to challenge their assumptions that you can always tell when someone is trans.

We have a significant problem brewing, when transgender people who do have passing privilege, are made to feel as though their voice can't have an impact. I acknowledge that I have passing privilege, but that doesn't take away my struggles growing up and navigating the world as a trans person. It certainly doesn't diminish my trans voice in these conversations. So rather than remain quiet and enjoy my privilege -- I chose to out myself to the world. While the negative comments do sting, I don't regret what I did. The positive comments far outweigh the negative. However, it's the messages from the youngest of our community, the people new to transition, that have been empowered to bravely move forward in their journey, that mean the most to me.

How far will this downward spiral, of who's the most oppressed and most marginalized in the trans community go? Why can't we, as a community, accept that each trans person has their own unique experience that comes with its own challenges? This should not be a competition as to which of us society treats the worst. What are we saying to our detractors, and to the powers that be, when we point fingers at and judge one another? How many trans voices will be silenced for fear of being accused of being an unfair representation?

20 years ago, you'd be hard pressed to find any positive representation of trans people in the media. Now, we have gained momentum and are becoming more visible. We're in an exciting time right now as a community, and people are paying attention. Sure, there's bound to be push back, which is why we see things like these bathroom bills popping up. But we must remain visible and keep the conversation going in a positive direction. We must not give up the fight or cause any of our own to become disheartened. We must keep gaining momentum. It benefits all of us, when build each other up and empower all trans voices.